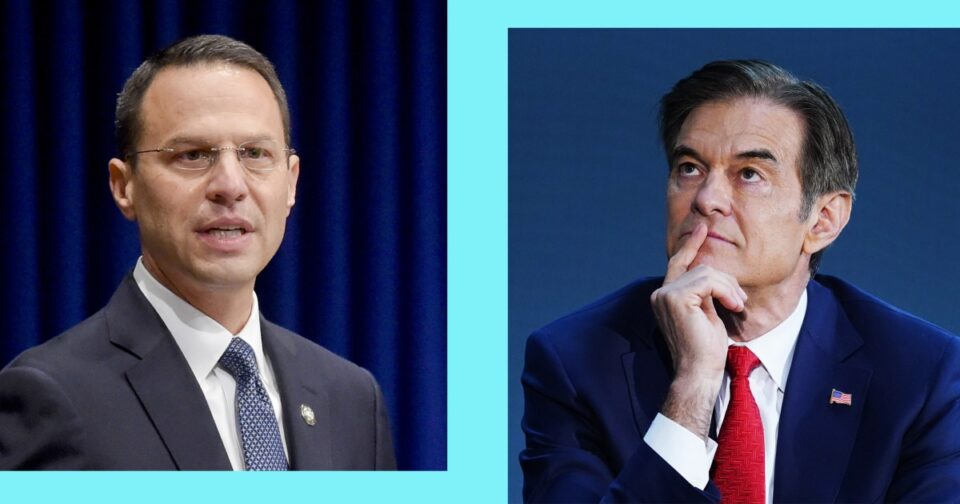 Ticket-splitters are back, and they’re playing a starring role in the chaotic 2022 campaign.

In battleground states from Georgia to New Hampshire to Ohio, a potentially decisive slice of voters tell pollsters they’re supporting a Democrat for one high-profile office and a Republican for another.

Nowhere is the dynamic clearer than in Pennsylvania.

“What you’re seeing is a repudiation of extremism,” Morgan Boyd, a Republican and a Lawrence County commissioner who endorsed the Democratic nominee for governor, Josh Shapiro, but is backing GOP Senate nominee Mehmet Oz, said in an interview. “Across the board, moderates are rising up and saying, ‘Enough is enough.’”

Shapiro, the state attorney general, leads Republican Doug Mastriano by a commanding 11 points in a recent Fox News poll, while Democratic Senate nominee John Fetterman’s edge over Oz is just 4 points — slightly outside the margin of error. Oz allies say “Oz-Shapiro” voters are crucial to his chances of beating Fetterman. Within the past two weeks, an Oz campaign co-chair was spotted at a Shapiro fundraiser while two major police unions, one representing Philadelphia officers and the other Pennsylvania state troopers, offered endorsements of Oz and Shapiro.

For decades, it was not uncommon for voters to cast ballots that were far from uniform in the party affiliation of the candidates they selected. But as both parties became more and more ideologically cohesive in the 21st century, such ticket-splitting voters increasingly became an endangered species. Yet this cycle, these voters may hold the key to victory in the most high-profile of races — if a swath of recent polls reflect the outcome.

There are differing dynamics at play in each contest, though similar themes abound. In New Hampshire, Sununu enjoys wide approval and name recognition while Bolduc just advanced from a tough primary in which he took a number of positions, including on the 2020 election, in order to closely align himself with former President Donald Trump. The situation is similar in Ohio, where DeWine has been elected to statewide office multiple times and earned bipartisan praise for his handling of the pandemic, while Vance emerged the winner of a chaotic primary contest that was a race to the right.

In Arizona, Kelly, as one Democratic strategist working gubernatorial races noted, has been essentially campaigning nonstop statewide for nearly four years and enjoys high name recognition, while Hobbs is the least known of the four major candidates running.

The disparity between Lake and Masters’ polling may be more a product of a third-party candidate in the Senate race than voters’ differing views of the two fiercely pro-Trump hopefuls — though Lake does benefit from being a charismatic former news anchor in Arizona’s largest media market, and in interviews, some Republicans suggested there may be some Kelly-Lake voters boosting her standing over Masters.

“Katie Hobbs has gotten better as a candidate. My read is perhaps she’s not the strongest candidate,” said a second Democratic strategist familiar with the Arizona dynamics, who requested anonymity to speak candidly. The strategist argued that Kelly and Warnock are outpolling their party’s candidates for governor because each has built a unique personal brand in their state.

The ticket-splitting dynamic may determine which party controls Congress and oversees statewide election operations in key states during the 2024 presidential contest. It has been a surprise to many pollsters, political operatives and experts who have tracked increased partisan polarization — and what they thought was the demise of ticket-splitting — in recent years.

The apparent trend reversal comes despite the rising nationalization of statewide races, with many contests for governor and Senate this fall featuring similar themes like abortion, inflation and protecting American democracy.

Jessica Taylor, the Senate and governors editor of the Cook Political Report, says the ticket-splitters are largely disillusioned voters who are spending more time evaluating candidates than party affiliation.

“They’re voters that are frustrated with both parties, with the more extreme elements of either party,” she said. “I see a lot of focus groups and some of these are — they voted for Trump in 2016, didn’t like what happened, they voted for Biden, they don’t think he’s doing a good job. So they are looking more at candidates. Who do they trust more?”

In Georgia, “there very well could be Kemp-Warnock voters,” she said, noting that Kemp seems to have won credibility with moderate voters for rejecting Trump’s fabricated claims of a stolen election.

Taylor’s point highlights a theme seen across many of these races — voters drawing a distinction between Republicans seen as closely aligned with Trump and those who are not.

Berwood Yost, director of the Franklin & Marshall Center for Opinion Research, which conducts the Franklin & Marshall poll in Pennsylvania, said that split-ticket voters in his state seem to be drawing a distinction between Mastriano, a MAGA Republican closely aligned with Trump, and Oz, who was also endorsed by Trump but has sought to come across as a more moderate Republican after the primary.

“There’s a strong split in that Republican Party between … the Trump faction of the party and more traditional Republicans,” Yost said, noting that ticket-splitters seem to be shying away from Mastriano. “It seems likely that if it’s happening here, it’s going to happen in other places.”

David La Torre, who advised GOP gubernatorial contender Jake Corman during the Pennsylvania primary, said Oz-Shapiro voters such as himself are those who are dismayed by the direction Trump and his allies have taken the party.

“Donald Trump is not as popular as he once was,” he said. “In fact, that popularity is starting to fade. So it doesn’t surprise me if there probably are some similarities where [in] Pennsylvania and Georgia, there’s a willingness to elect Republicans who aren’t completely wedded to Trump. I can’t say it enough, people want to get off the crazy train.”

To further explain the unique dynamics, Suffolk pollster David Paleologos cited the Supreme Court’s decision to overturn Roe v. Wade and the increased spotlight on Trump because of the federal government’s investigation into his handling of classified documents after he left office, among other things. Trump is less popular than President Joe Biden in many battleground states, dragging GOP candidates down, he said.

“What’s happening with some of these Republicans in states like New Hampshire is their likability is tracking Trump’s unlikability,” Paleologos said. “And then you add abortion as an issue that clearly defines how many independent and swing voters align with candidates.”

Still, some say crossover voters could fizzle by the election — including Sen. Rick Scott of Florida, the chair of the Republican campaign arm. “I just can’t imagine that there’ll be Kemp-Warnock supporters,” he said. “I think if you’re going to vote for Kemp, you’re voting for Walker.”

And Sen. Chris Van Hollen of Maryland, the former Democratic campaign chief, said that while he has seen polls that suggest ticket-splitting could happen, it’s “hard to know” if it will persist. “I think if you see that, it will be at the margins,” he said.

Back in Ohio, the Senate contest has vexed Republicans, forcing them to pour in money to hold on to a seat in an increasingly red state that Trump carried by 8 points in 2020 and 2016.

“The largest disparity might even be in Ohio, where you’re going to have Ryan-DeWine voters,” Taylor said, though she said the state is probably “too hard of a lift” for Democrats.

Ryan has run with on a populist economic message aimed at independents and moderate Republicans, while Whaley, the Democratic nominee for governor, has emphasized abortion rights. “I really don’t have the luxury to worry about anybody else,” Ryan said in an interview over the summer, while discussing supporters who say they prefer DeWine over Whaley.

David Pepper, a former Ohio Democratic Party chair, said the polling in Ohio suggests that “there is a decently sized block in the middle that does go back and forth” between the parties. “And I think Tim’s got a majority of them right now. Mike DeWine clearly has a majority.”

Christopher Borick, director of the Muhlenberg College Institute of Public Opinion, which conducts the Morning Call survey in Pennsylvania, said the ticket-splitters his research has found tend to be older suburbanites, the kind of voters who overwhelmingly elevated Rep. Brian Fitzpatrick, R-Pa., in an eastern Pennsylvania congressional district while rejecting Trump last cycle.

Though he believes the current political dynamics make it inevitable that some of the ticket-splitters come home to their party before Election Day, Borick said he thinks these voters will weigh heavily in states where Republicans at the top of the ticket are seen very differently from one another.