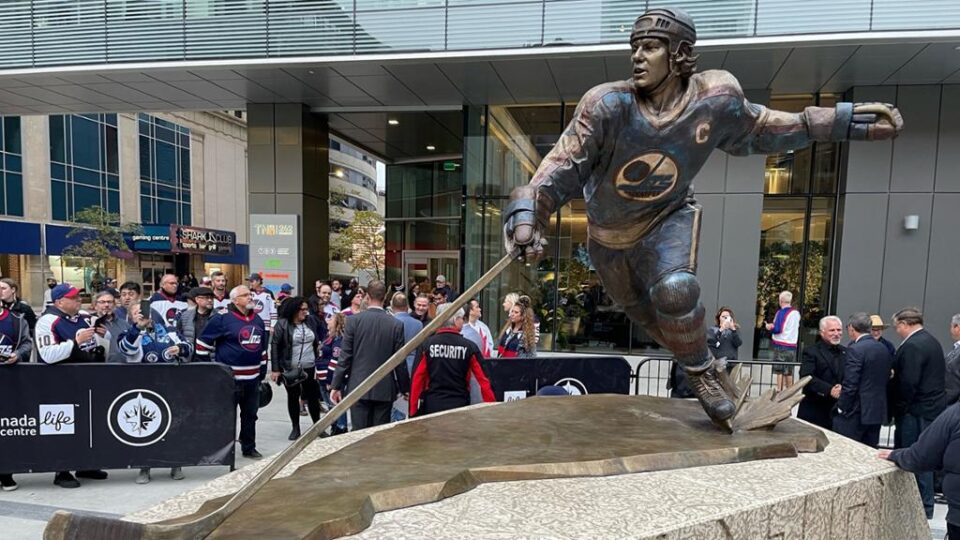 WINNIPEG — The late Dale Hawerchuk was honored by the Winnipeg Jets on Saturday with a bronze statue in True North Square at the corner of Honourary Dale Hawerchuk Way and Hargrave Street.

“When you’re preparing these things, the thought that just kept coming back is, ‘I wish he was here,'” Jets executive chairman Mark Chipman said. “That’s the difficult part of this. I wish he had been able to be here and see all of the love that this community has for him.”

Widely regarded as the greatest Jets player of all time, Hawerchuk was selected with the No. 1 pick in the 1981 NHL Draft by the original iteration of the Jets franchise, which moved to Arizona and became the Phoenix Coyotes in 1996.

“This statue is a testament to the giving life he lived,” Crystal Hawerchuk, his widow, said as she spoke to thousands in attendance at the unveiling. “Now, he is home. Here again in Winnipeg.”

A six-time 100-point scorer for the Jets, he helped make the team a consistent Stanley Cup Playoff team during the 1980s and held the franchise career records for goals (379) and points (929) until Shane Doan surpassed them during the 2015-16 season. Hawerchuk was elected to the Hall of Fame in 2001.

“He wasn’t just your captain, he was one of you,” NHL senior vice president of hockey operations Kris King, who played with Hawerchuk in Winnipeg, told the crowd. “He loved playing for the Winnipeg Jets, and he loved saying he was from Winnipeg.”

The bronze statue was sculpted by renowned artist Erik Blome of Figurative Art Studio, who was also the sculptor for Wayne Gretzky’s Los Angeles Kings statue that is installed outside Crypto.com Arena.

“This was so incredible,” Eric Hawerchuk, his son, said following the statue’s unveiling. “… It was very emotional. I kind of prepared for it but just to see the sheer size of it and the attention to details is kinda hard to put it into words. But I’m so proud of him and to see this here and to see all of the people here is just so amazing. It still shocks me every time I see it.”

Jets forward Mark Scheifele played three seasons (2010-13) for Barrie of the Ontario Hockey League when Hawerchuk was its coach. Hawerchuk joined Barrie in 2010 and remained there until taking a leave of absence for health reasons in September 2019.

“He was the best coach I’ve ever had,” Scheifele said. “I don’t think there’s many out there like him. He was a guy that just wanted to teach guys, no matter if you were a first-line or a fourth liner, whoever it was, he wanted to teach you about how to get better or what to do it on the ice [and] he would be on the ice showing you how to do it. Whether it was about school, whether it was about being at home, whatever it was, he always had lessons to be taught, and that was one thing that I was so lucky that [he] taught me a lesson every single day.

“Like I said in my speech (at the unveiling), I get to drive by this statue every day and remember all those lessons, and that’s a pretty amazing thing for me to now experience.”