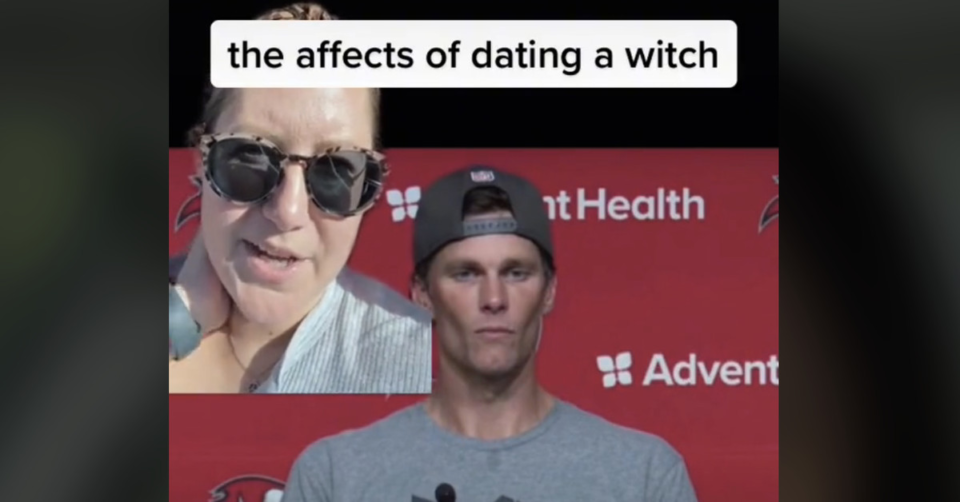 Tom Brady’s career is about to come crashing down after a series of protective wards and spells cast on him by Gisele Bunchen will cease following their divorce. This, according to witches, who are all over TikTok explaining how Tom wronged a witch, now he has to feel her wrath.

The social media spellcasters #WitchesOfTikTok are all over this story, gleefully predicting Tom’s collapse.

This extends far beyond one account. There are hundreds of TikTok witches who are posting about Tom Brady and how he wronged Gisele, which will destroy his career. The theory goes a little something like this: Gisele is a white witch, who harnesses divination to cast altruistic spells. Brady knew this when they got married, and it’s been the sole reason his career has continued well into his 40s.

Gisele has cast protective wards to shield Tom’s body, spells to enhance his athletic abilities, and given him potions that have allowed him to freeze time and stop the aging process. The agreement between Brady and his witch wife was that she’d support his athletic endeavors, and in exchange he’d retire at age 45, the tarot number for making “positive life changes,” meaning leaving football to spend time with his family. Brady broke this promise with Gisele when he announced he was returning to the NFL after a 40 day retirement — that number is important too, because 40 is the number for following life’s purpose, or the soul’s desire.

So, not only did Tom choose not to retire at age 45, as they agreed, but he hurt Gisele by returning to the NFL after 40 days — showing his soul belonged to the NFL and football, not his wife and family.

Being a white witch, Gisele won’t cast hexes and spells to ruin her former husband, but she will take the time to focus on herself and her family. As that happens the spells she cast on Tom will fizzle, the wards will fail, and he’ll be on his own for the first time since 2009. When that happens his career will end, as age catches up to him. Brady will collapse into oblivion, and have the worst season of his career.

Remember when Brady took a break during training camp and showed up looking gaunt? The witches of TikTok believe this was a punishment by Gisele. She forced Tom to appear in front of the world looking hollow and lifeless, showing his face without her wards in effect.

Normally I detest conspiracy theories. I hate seeing grifters prey on peoples’ fears and anxieties to turn them into consumers in order to make a quick buck. It’s all the same, and whether you tell people the moon landing was fake, lizard people control the world economy, or everything created by The Daily Wire, the concept is the same: Keep people terrified so they keep buying mindlessly.

That said, when it comes to Tom Brady extending his career through witchcraft I am all in. Hell, in 2019 Brady basically told the world that Gisele casts spells on him, and we barely batted an eye.

“I’ve learned a lot from my wife over the years. She’s so about the power of intention, and believing things that are really going to happen and she always makes a little altar for me at the game, because she just wills it so much. So she put together a little altar for me that I could bring with pictures of my kids. I have these little special stones and healing stones and protection stones and she has me wear a necklace and take these drops she makes and say all these mantras.”

Never has a single season of football for a player meant more to me. The remainder of 2022 for Tom Brady won’t just define his decision to come back to the NFL, but become a referendum on the existence of modern day witches and their power.

Up to this point Brady has been playing good football. He’s completing 68 percent of his passes, thrown six touchdowns and only one interception — and he’s on pace for 4,500 yards. This gives us the ideal baseline to see whether he plummets from here. I don’t know the carryover period of witch-based spells. I can’t tell you whether they’ll wear off immediately, or if he’ll have a few weeks of witch power left before it’s all gone. Either way, watch Tom for the rest of this year and ask yourself: Was Tom Brady’s success a product of witchcraft this whole time?