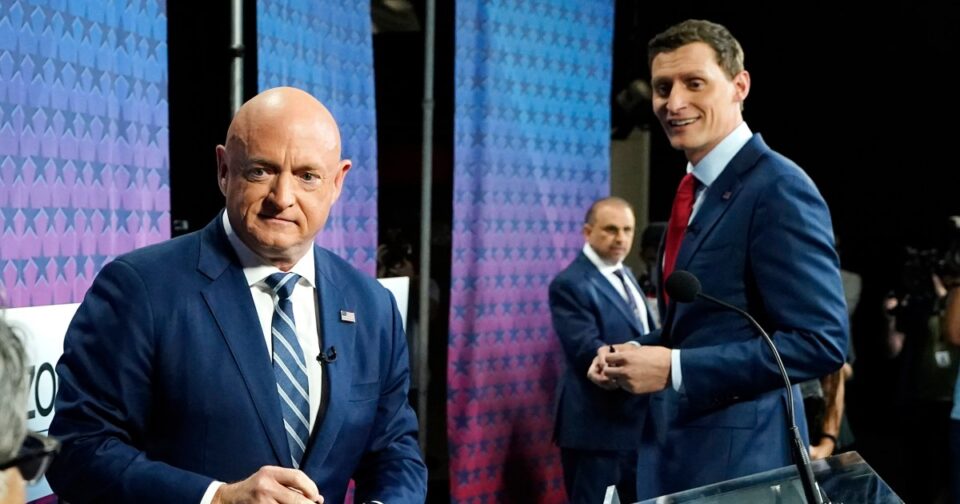 PHOENIX — Sen. Mark Kelly, D-Ariz., broke with his party over the hot-button issue of immigration at a debate Thursday, highlighting his differences with progressives over policy and rebuking Democratic leaders in unusually stark terms.

“I’ve spent a lot of time on our southern border, and let me just say it’s a mess. It’s a chaos. It’s crisis after crisis,” Kelly said. “I worked in Washington to bring more Border Patrol agents to the state of Arizona.

“I’ve been strong on border security. And I’ve stood up to Democrats when they’re wrong on this issue — including the president,” Kelly continued. “When the president decided he was going to do something dumb on this and change the rules that would create a bigger crisis, I told him he was wrong. So I pushed back on this administration multiple times.”

Kelly’s campaign said he was referring to Biden’s decision to end Title 42, a pandemic-era policy that began during the Trump administration that enabled officials to turn away asylum-seekers in the name of public health, and it noted Kelly’s vocal opposition to the move this year.

His campaign also highlighted another break with Biden last year, when Kelly labeled the border situation then a “crisis,” as well, citing surging levels of people seeking asylum without additional resources to process applications, in addition to his demands for more federal resources to bolster security.

Kelly said many Democrats “don’t understand this issue,” while Republicans want to politicize it. Kelly, who was first elected in a 2020 special election, is running against Republican challenger Blake Masters for a full six-year term.

The issue of immigration appears to be a political liability for Democrats. Polls suggest Americans disapprove of Biden’s handling of the matter — including a survey by the president’s own pollster. An NBC News poll last month found that voters prefer Republicans over Democrats to run immigration policy by 46% to 29%. A CNN poll found immigration is tied as the third most pressing issue among likely Arizona voters.

The debate, which is the candidates’ only matchup, featured multiple heated exchanges between the two major-party nominees and a third-party candidate, Libertarian Marc Victor.

At one point, Masters asked Kelly whether he had “done everything” within his power to “secure the southern border.”

Kelly responded: “I’ve been focused on the border since Day One.”

Masters retorted, “If this is the result of Senator Kelly being focused on the border, my gosh, he’s the most ineffective and worst senator of all time.”

Kelly, a former Navy pilot and astronaut, assailed Masters for his position on abortion, previous calls to privatize Social Security, comments about the validity of the 2020 election and criticisms of the U.S. military. Masters, a venture capitalist and former deputy to billionaire tech mogul Peter Thiel, sought to tie Kelly to rising inflation while defending his opposition to abortion, his skepticism about the 2020 election and his criticisms of the military, which reportedly included opposition to U.S. involvement in World War II when he was a college student.

Surveys in recent weeks have consistently suggested Kelly leads by 3 to 7 percentage points.

During an extended exchange on abortion policy — one of the top issues both in Arizona and nationwide after the Supreme Court overturned Roe v. Wade — Kelly insisted Masters was trying to cover up his true position.

Masters has called abortion “demonic” and a “religious sacrifice,” and he has supported federal restrictions, Kelly asserted. NBC News reported in August that Masters had scrubbed his website of hard-line abortion positions after his primary win.

“I believe Arizona’s got the right to make its laws. That’s the whole point of reversing Roe vs. Wade,” Masters said. “And I believe in a federal backstop.”

Kelly tore into Masters as a know-it-all who fancies himself as being smarter than women and everyone else around him.

At one point, debate moderator Ted Simons sought to get Masters, who is backed by Trump, to clarify his position on the legitimacy of the 2020 election.

During the primary, Masters put out an ad saying: “I think Trump won in 2020.” In early August, the election policy section of his website was rewritten to remove language that claimed the vote was a “rotten mess,” CNN reported.

Masters said he believes Biden is the “legitimate” president but argued that Trump would have won re-election had stories about potential malfeasance by Biden’s son Hunter Biden not been “censored’” on social media.

He added that he believes in “Election Day” and not “election season,” although he later answered “no” when he was asked whether he supports eliminating mail-in voting in Arizona, where it has been widely allowed for decades.

Pressed about whether the 2020 vote itself was tainted, as Trump and his allies repeatedly claimed but were unable to substantiate in court, Masters said: “Yeah, I haven’t seen evidence of that.”

Kelly said that in 2024, “we could wind up in a situation where the wheels come off of our democracy.”

“And it’s because of folks like Blake Masters that are questioning the integrity of an election,” he added.

Victor, the Libertarian candidate, who some Republicans fear could siphon votes from Masters, took Masters to task for treading cautiously in relation to the validity of the 2020 election.

“Boy, for a guy who’s never been elected before, he sure sounds like a politician to me,” Victor said. “I’ll answer the question: Joe Biden won the election.”

Congress Awards Gold Medals to Police Who Protected the Capitol on Jan. 6