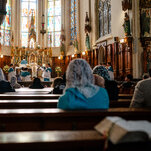 DETROIT — Eric Agustin’s eight children used to call the first day of the week “Party Sunday.” The family would wake up, attend a short morning Mass at a Catholic parish near their house, then head home for lunch and an afternoon of relaxing and watching football.

But this summer, the family made a “big switch,” one of his teenage sons said on a recent Sunday afternoon outside St. Joseph Shrine, the family’s new parish. At St. Joseph, the liturgy is ornate, precisely choreographed and conducted entirely in Latin. The family drives an hour round trip to attend a service that starts at 11 a.m. and can last almost two hours.

The traditional Latin Mass, an ancient form of Catholic worship that Pope Francis has tried to discourage, is instead experiencing a revival in the United States. It appeals to an overlapping mix of aesthetic traditionalists, young families, new converts and critics of Francis. And its resurgence, boosted by the pandemic years, is part of a rising right-wing strain within American Christianity as a whole.

The Mass has sparked a sprawling proxy battle in the American church over not just songs and prayers but also the future of Catholicism and its role in culture and politics.

Latin Mass adherents tend to be socially conservative and tradition-minded. Some, like the Agustin family, are attracted to the Mass’s beauty, symbolism and what they describe as a more reverent form of worship.

Others have also been drawn to the old form through a brand of new hard-right rhetoric and community they have found in some Catholic communities online. They see the pope’s attempt to curb the old Latin Mass as an example of the perils of a world becoming unmoored from Western religious values.

The traditional Latin Mass, also referred to as the “extraordinary form,” was celebrated for centuries until the transformations of the Second Vatican Council in the 1960s, which were intended in part to make the rite more accessible. After the Council, Mass could be celebrated in any language, contemporary music entered many parishes and priests turned to face people in the pews.

But the traditional Latin Mass, with all its formality and mystery, never fully disappeared. Though it represents a fraction of Masses performed at the 17,000 Catholic parishes in the United States, it is thriving.

The United States now appears to have at least 600 venues offering the traditional Mass, the most by far of any country. More than 400 venues offer it every Sunday, according to one online directory.

This growth is happening as Pope Francis has cracked down, issuing strict new limits on the rite last year. His immediate predecessor, Pope Benedict XVI, had widened access to the old Mass, but Francis has characterized it as a source of division in the church and said that it is too often associated with a broader rejection of the aims of the Second Vatican Council.

On one level, the split over the old Mass represents a clash of priorities and power struggles in church leadership. In pews and parishes, it is more complicated. Many Catholics say they are attracted to the Mass for spiritual reasons, bolstered by aesthetic and liturgical preferences rather than by partisanship.

Dozens of large, young families have flocked to St. Joseph Shrine since it began offering the traditional Latin Mass regularly in 2016. A historically German parish with a 19th-century building that once struggled to keep the lights on is now bustling with people, including many couples with five or more children.

High Mass on Sundays begins with holy water sprinkled up the aisle, and it features plumes of incense and the sounds of bells, a pipe organ and Gregorian chant. Men tend to wear suits and ties and most women wear skirts and lace mantillas on their heads, the latter a traditional sign of humility and femininity. Parking nearby is hard to find on Sundays.

“It’s nothing exceptional here,” demurred Rev. Canon J.B. Commins, 33, who lives in the brick rectory next door. “In other places where the traditional Mass is being celebrated, it’s exponential growth.”

Leaning into the demands of intense religious experience, many supporters of the Latin Mass seek a return not just to old rituals but to old social values and gender roles. Here, the arcane and rigorous are not barriers to accessibility but attractions that tie believers to a long history of spiritual clarity, which they see as sharply contrasting with the modern church.

The pandemic accelerated the divide, as mainstream parishes generally stayed closed longer, driving some Catholics to seek out new parishes. Many attendees say they discovered traditionalist podcasters and influencers who turned them onto the older Mass.

Although Catholics as a whole are a politically diverse cohort in the United States, frequent Mass attendees tend to be more conservative: 63 percent of Catholics who attend Mass at least monthly supported Donald J. Trump in the 2020 presidential election, compared with 53 percent of less-frequent attendees, according to the Pew Research Center. Informal surveys have found that Latin Mass attendees not only attend Mass more often but hold almost universally conservative views on topics like abortion and gay marriage.

Before the 11 a.m. Mass at St. Joseph one Sunday in early October, attended by some 300 people, Canon Commins read an announcement from Archbishop Allen Vigneron of Detroit, urging Catholics to “take action” to defeat a ballot amendment that would enshrine a right to abortion in the state’s constitution. (Voters in the state later approved the measure.)

Since Francis became pope in 2013, he has emphasized inclusivity, and attempted to soften the church’s approach to flashpoints like abortion and homosexuality. He has also issued a major encyclical on environmental stewardship, prayed for immigrants at the U.S.-Mexico border, and appointed women to historically significant roles in church operations.

Francis’ 2021 document “Traditionis Custodes,” comparable to an executive order, limited where and when the old Mass can be celebrated. And this summer, he outraged traditionalists further with a new document making clear that the tensions around the Mass are more than a question of taste. “I do not see how it is possible to say that one recognizes the validity of the Council — though it amazes me that a Catholic might presume not to do so — and at the same time not accept the liturgical reform,” he wrote.

The crackdown helped fuel what some call the “liturgy wars.”

“It’s a whole vision of the church and what it means to be a Christian and a Catholic that’s at stake here,” said John Baldovin, a priest and a professor at the Boston College School of Theology and Ministry who has written often about liturgical issues. “You can’t say it’s just about a beautiful Mass.”

The conflict is particularly fierce in the United States, where conservatives dominate the bishops’ conference and high-profile critics and media outlets regularly challenge Francis’ leadership.

At a conference in Pittsburgh this fall, Catholic critics of Pope Francis laid out three “articles of resistance” against the Vatican and its current leadership. Their top objection was to “Traditionis Custodes,” which they called an act of “religious discrimination against Traditional Catholics.”

Some bishops, including those in Chicago and Washington, have drastically reduced the availability of the traditional Latin Mass this year.

“It’s something I couldn’t imagine, having to beg and plead for the traditional Latin Mass,” said Noah Peters, who organized a five-mile “pilgrimage” in September from a cathedral in Arlington, Va., to one in Washington in protest of the restrictions in both dioceses.

Mr. Peters was raised as a secular Jew and was drawn to Catholicism through the traditional Latin Mass “because it had this beauty, timelessness and reverence about it,” he said.

Like Mr. Peters, almost all Latin Mass devotees use a version of the word “reverent” unprompted, contrasting the tone of the Latin Mass with oft-cited if rare examples in modern parishes featuring nontraditional elements like puppets and balloons, a casual treatment of the Eucharist, or music and dance they consider disrespectful. The popular traditionalist podcaster Taylor Marshall often tells a story about feeling driven away from the Novus Ordo when he was served the Eucharist by a layperson wearing a Grover T-shirt.

Alex Begin, a Detroit-area real estate executive, trains priests in the liturgy and helps parishes that want to start offering the Mass.

On a recent drive starting in downtown Detroit and winding through former working-class German and Polish neighborhoods, Mr. Begin pointed out churches that have begun offering the Latin Mass, and some that plan to start. Mr. Begin has a taste for the arcane: His hobbies include maximizing frequent flier rewards and collecting indulgences, which he refers to as “Heaven’s frequent flier program.”

Mr. Begin sees Pope Francis’ antagonism toward the Latin Mass as working against his goal of unity. “You’re going to drive people to breakaway groups,” he said.

At Old St. Mary’s, a 19th-century parish in the city’s touristy Greektown neighborhood, some 150 people gathered in October for the monthly Latin Mass service, complete with a Gregorian choir.

Congregants knelt, rose, crossed themselves and murmured prayers. Incense wafted through the vast, dimly lit room. When it was time to receive the Eucharist, they filed silently forward and knelt, their faces slightly upturned.

“Corpus Dómini nostri Jesu Christi custódiat ánimam tuam in vitam ætérnam. Amen,” the priests prayed as they placed a thin wafer on each tongue. May the Body of Our Lord Jesus Christ preserve your soul unto life everlasting. Amen.

The Latin Mass “brings the true Catholics out,” said Kristin Kopy, 41, after the service.

Mrs. Kopy was holding her sleeping 2-week-old daughter, Philomena, as her older children played nearby. She and her husband have been attending the Latin Mass for the last six years. They felt something was missing in their experiences of the new Mass that they now have found in the old.

“I don’t speak Latin,” she said. “But it feels like you’re connecting more with God.”

Will Pelosi Stay or Will She Go? Perhaps a Little Bit of Both.

For Western Weapons, the Ukraine War Is a Beta Test