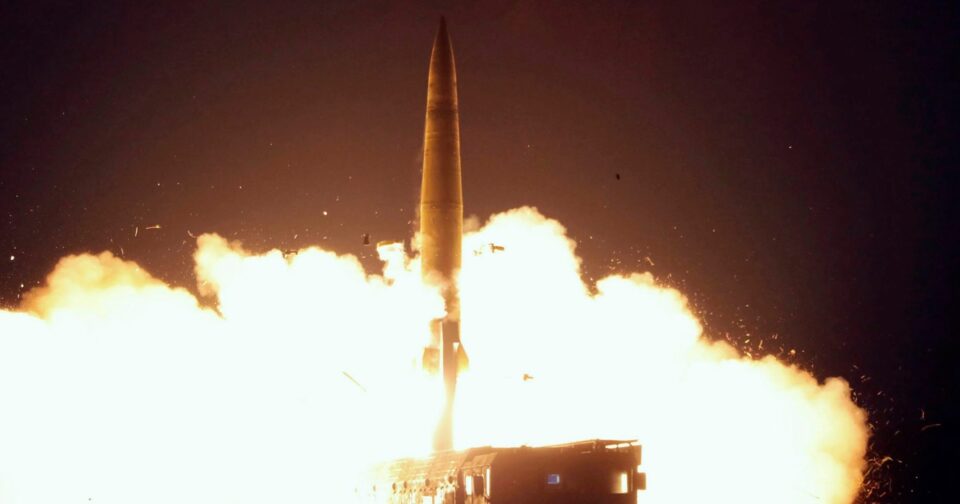 In his first face-to-face meeting with Chinese President Xi Jinping since he became president, President Joe Biden on Monday issued a stark warning: Xi needed to attempt to make it clear to close ally North Korea that launching “long-range nuclear tests” was unacceptable and that if Pyongyang ignored Xi, the U.S. would take certain “defensive” actions to “send a clear message to North Korea.”

But warnings aren’t enough. Pyongyang is launching missiles at an unprecedented pace and reportedly exporting artillery shells to Russia, and it is believed to be preparing for a seventh nuclear test. The U.S. should do more than delegate responsibility for clamping down to Xi, especially after Biden admitted it’s unclear whether Beijing can “control North Korea.”

The U.S. should also do more than wait for North Korean leader Kim Jong Un to escalate further. Exactly what the defensive measures Biden hinted at are hazy, though last week Biden’s national security adviser, Jake Sullivan, said, “If North Korea keeps going down this road, it will simply mean further enhanced American military and security presence in the region.”

Instead, the Biden administration needs to take concrete measures now — specifically, immediately restoring the once-robust sanctions regime that has atrophied since Donald Trump embraced summit-level diplomacy with Kim in 2018 and then lost interest when it became clear Kim had no intention to disarm.

As things stand, some foreign policy voices are arguing that the lesson of the failure of Trump and preceding U.S. presidents to stop North Korea’s nuclear program is to accept North Korea as a nuclear power.

Last month, Bonnie Jenkins, the undersecretary of state for arms control and international security, suggested that the Biden administration would welcome “arms control” negotiations with North Korea, a phrasing that evokes talks with the Soviet Union that accepted that each side would maintain a nuclear arsenal.

Ned Price, the State Department’s spokesperson, has soundly rejected Jenkins’ comments on multiple occasions. That’s good — but not good enough. In practice, even disarmament talks have resulted in agreements that Pyongyang soon repudiates.

President Bill Clinton spent both of his terms engaged in negotiations, including an agreement in which Pyongyang was supposed to reduce its nuclear program — only for the Kim regime, then headed by Kim Jong Il, to admit in 2002 that it was developing a covert uranium enrichment program that “nullified” the curbs agreed to under Clinton.

Similarly, President George W. Bush spent most of his second term trying to negotiate and implement a disarmament agreement. Bush imposed financial pressure on the Kim family regime through U.S. sanctions and later a U.N. Security Council resolution that was passed just after Pyongyang’s first nuclear test in October 2006. But after North Korea re-engaged in negotiations, he reduced sanctions in exchange for promises of denuclearization, which Pyongyang soon violated.

President Barack Obama increased sanctions after North Korea’s second nuclear test during his first term in 2009 but didn’t maintain the momentum. He tried to jump-start negotiations with the Leap Day deal — and these efforts were short-lived, because Pyongyang launched a satellite using ballistic missile technology soon after the conclusion of the agreement.

Finally, in 2016, the Obama administration escalated sanctions against North Korea after a nuclear test and a ballistic missile launch that had real teeth. They included sanctions and an indictment against a Chinese company and four Chinese people who helped North Korea evade U.S. sanctions.

This robust sanctions policy in the last year of Obama’s presidency extended into the beginning of his successor’s term. Trump labeled it a “maximum pressure” policy, which was accurate, and kept it in place the next two years.

The policy reinforced that countries had to decide whether they wanted to do business with the U.S. or North Korea, because it could no longer do both. More than 20 countries curtailed diplomatic or commercial relationships with North Korea. And the U.S. also sanctioned Chinese companies, individuals and banks that were aiding North Korea’s sanctions evasion. Some experts predicted that Beijing would increase its support for Pyongyang, but China didn’t want to lose its access to the U.S. financial system, and it implemented the North Korea sanctions by severely restricting cross-border traffic.

It’s not a coincidence that Kim then agreed to summits with Trump in 2018 and 2019. Trump ended up walking away from the table after he realized Kim wasn’t serious about denuclearization. Yet, instead of ratcheting up pressure on North Korea, Trump turned to other issues for the rest of his term.

Shifting American attention elsewhere did keep things relatively quiet on the Korean Peninsula. Rather than provoke Seoul and Washington with missile launches, Pyongyang focused on quietly upgrading its arsenal.

Biden, too, has prioritized other things, including nuclear talks with Iran and responding to Russia’s invasion of Ukraine. Naturally, the White House had no interest in additional problems. But ignoring Kim worked only until Kim decided to make trouble.

It’s true that sanctions haven’t prevented North Korea from going nuclear. Yet Washington constantly disrupted its sanctions program to pursue fruitless negotiations. It has never had the patience to maintain sanctions until Kim has to bend, yet the pattern suggests that sanctions have been important in at least getting North Korea to the bargaining table.

A robust sanctions program today can limit the Kim regime’s revenue, forcing it to make difficult decisions among pursuing its nuclear program, maintaining military discipline and ensuring the loyalty of North Korean elites.

In the nearly 30 years since Clinton first tried to limit Pyongyang’s nuclear program, Washington has tried the same failed approach, hoping for a different result each time. If Biden really wants to try something different, he should give a robust sanctions policy a chance to work.