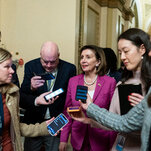 WASHINGTON — As Democrats celebrate a stronger-than-expected performance in the midterm elections, a consequential question is hanging over the party: What will become of Speaker Nancy Pelosi, the party’s long-serving House leader and the first woman to hold the post?

The issue has loomed large ever since Ms. Pelosi pledged in 2018 to limit herself to four more years as her party’s leader. But it has taken on greater significance in recent days, with House Republicans on the brink of winning a narrow majority, thus ending her tenure as speaker.

Now the question of will she stay or will she go has given way to a potential third option that some people close to Ms. Pelosi, 82, argue is a serious possibility for her: stepping down from leadership but remaining in Congress in a sort of emeritus role that would allow her to offer counsel to her colleagues and support the agenda of President Biden, 79, whom she has urged to run for re-election in 2024.

Such an arrangement would allow Ms. Pelosi to manage her own exit from the political scene while passing the torch to a new generation of leaders that many Democrats have argued for years was long overdue to take over from the three octogenarians currently running the House. She has hinted at just such a possibility.

“There are all kinds of ways to exert influence,” Ms. Pelosi told CNN’s Dana Bash on Sunday. “Speaker has awesome power, but I will always have influence.”

In the same round of interviews on Sunday, Ms. Pelosi told the ABC News anchor George Stephanopoulos, “I don’t have any plans to step away from Congress.”

Ms. Pelosi has repeatedly said she does not plan to make any announcements about her future until after all the votes are counted and the elections in the House are determined. But until she decides what she will do, House Democrats are effectively frozen in place, with nobody willing to step forward to challenge her iron grip on the caucus or risk crossing a figure who is well known for holding grudges against opponents.

Understand the Outcomes of the 2022 Midterm Elections

Republicans currently appear to be on track to win 221 seats, if the latest trends continue.

Aides to Ms. Pelosi, who is famous for keeping her own counsel, have warned that nobody knows her thinking about what’s next and that it is foolish to try to guess. But people close to her have also noted that the landscape has changed since she pledged not to seek to lead her party past January 2023, and that she is unlikely to leave Congress just weeks after voters in her district elected her to another two-year term.

Unlike 2010, when Ms. Pelosi was blamed for Democratic losses in the midterm elections, Democrats are looking for someone to credit for their stronger-than-expected showing in an election cycle in which the Republicans promised a “red wave” that never crested.

The politically motivated attack on her husband, in which Ms. Pelosi was the target, as well as an election that Democrats view as a rejection of extremism by voters, has also bolstered Ms. Pelosi in the eyes of many of her colleagues.

“The good will and respect for her in the caucus is at an all-time high,” said Representative Ro Khanna, Democrat of California, noting the behind-the-scenes role she played on Jan. 6, when she showed composure under fire while Congress was under direct attack, and the resilience she has demonstrated after the attack on her husband.

“I think she understands we’re still in a very perilous time, despite good outcomes,” Mr. Khanna said. “There’s a value to youth and ambition, but the value of age is it dulls the personal ambition. I have confidence that her decision is going to be what is in the interest of the country.”

At the same time, youth turnout in the election was seen as a major factor in Democratic victories, and many members have long been ready for new, younger leadership. Representative Dean Phillips, Democrat of Minnesota, has been one of the few lawmakers to say publicly that the old guard needs to go, telling Punchbowl News on Tuesday that members are “eager for a new generation of leaders to rise.”

That has some people in Ms. Pelosi’s orbit speculating about the overlooked third option for her: staying on, but not as an elected leader.

Such an unconventional move would allow Ms. Pelosi to continue to influence Democratic strategy and serve as a resource for candidates. It would also give her more time to spend in San Francisco with her husband, Paul Pelosi, who she has said is on a long road to recovery after being assaulted in their home with a hammer, and whose condition she said would affect her plans.

“The idea that she would stay in Congress, where Democrats, new members and the White House can continue to benefit from her extraordinary talents, would be another lucky and fortunate turn for Democrats in this historic election cycle,” said Stacy Kerr, who for a decade served as a senior aide to Ms. Pelosi. “We shouldn’t expect her to follow any path other than her own.”

There are relatively few speakers who step down from leadership to continue in what is typically seen as a backbencher role. The most common path is the one Ms. Pelosi has chosen in the past: to run and win election as minority leader. Ms. Pelosi remained as the leader of her caucus after Democrats lost the majority in 2010 and then reclaimed the gavel in 2018, with the caveat that she would step down after two more terms.

“The most common ways that speakers end their careers are either dying in office, not running for re-election or resigning in the middle of their term,” said Matthew Green, a professor of political science at Catholic University who studies Congress. “It’s very rare for a speaker to get re-elected to Congress and then stay in Congress and not be in a leadership position.”

In recent history, J. Dennis Hastert, the former Republican speaker from Illinois, stayed on for just one term as a rank-and-file member of Congress after his party lost the majority. Ms. Pelosi gave him a ceremonial office in the Capitol in recognition of his service as speaker, an arrangement that would be difficult to imagine in her case given her toxic relationship with Representative Kevin McCarthy, the California Republican who is seeking the speakership in the next Congress.

Reaching further back, Joseph Cannon, the legendary speaker from Illinois who left the post in 1911, remained as a rank-and-file Republican member for most of a decade until he retired, widely respected by his colleagues.

But for the most part, leaders do not voluntarily give up power.

For Ms. Pelosi, however, the calculation could be different given what is shaping up for Republicans as a historically small margin of control, which could make the House unmanageable for them and empower Democrats.

“The Republican Party might be so tiny in the House that Democrats could have a lot of influence as the minority party,” Mr. Green said. “One of her great strengths is keeping her party unified. Having her help to whip members could be crucial.”

Ms. Pelosi has not closed the door on trying to remain in leadership, and her allies in Congress said she would have the support to do so if she decided to.

Representative David Cicilline, Democrat of Rhode Island, said he could not envision a scenario where Ms. Pelosi stayed in Congress but stepped aside as a leader.

“Whatever the speaker decides, there’s broad support in the caucus to support that decision,” Mr. Cicilline said. “It’s hard for me to imagine that there’s serious consideration to remain there and not be in leadership.”

Mr. Khanna said for Ms. Pelosi to remain in Congress but not in leadership would have to be “thoughtfully defined.”

But he argued that she would be in good historical company if she did so.

“John Quincy Adams had his most successful days as a rank-and-file member of Congress,” Mr. Khanna said, referring to the nation’s only former president to go on to serve in the House of Representatives after his term in the White House.