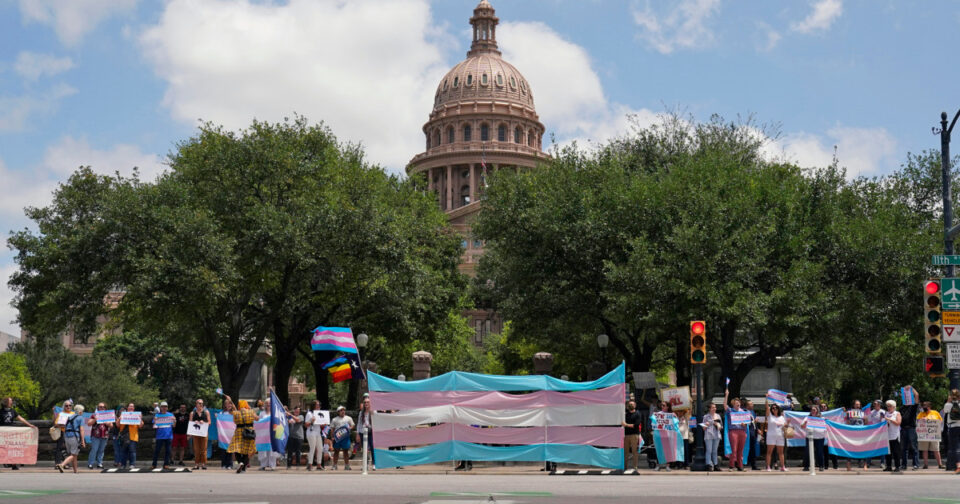 Texas Republicans introduced several bills this week that target the transgender community, including at least two measures seeking to criminalize gender-affirming care for minors and one looking to prevent children from attending drag performances.

Although the Legislature doesn’t officially begin its next session until mid-January, Monday was legislators’ first chance to file their bills for the coming term, potentially foreshadowing the state’s political priorities for the coming year. GOP legislators are barreling ahead with an updated party platform, officially unveiled over the summer, that defines homosexuality as an “abnormal lifestyle choice” and is opposed to “all efforts to validate transgender identity.”

At least two bills introduced this week would designate gender-affirming care for minors as child abuse under state law, and another would revoke liability insurance for providers who offer it.

Gender-affirming care for some minors experiencing gender dysphoria, a medical condition that involves a conflict between people’s sex assigned at birth and their gender identities, is considered medically necessary by a number of major accredited organizations, including the American Academy of Pediatrics and the American Medical Association. For minors, such care typically includes puberty blockers, which are recommended to trans youths before the onset of puberty, or hormone therapy for teenagers. Adolescents under age 18 in the U.S. are unable to get gender-affirming surgery in most cases, according to the Endocrine Society.

State Attorney General Ken Paxton tried this year to classify transition-related care for minors as child abuse under state law. Republican Gov. Greg Abbott subsequently called on people to report parents of transgender minors to the state if they suspect the minors are receiving gender-affirming care. Several of those investigations, however, have been tied up in court.

Another bill filed Monday would classify any business that decides to host a drag show under the state’s statutory definition of “sexually oriented businesses.”

The bill, sponsored by Republican state Rep. Jared Patterson, defines a drag performer as anyone who “exhibits a gender identity that is different than the performer’s gender assigned at birth “by using “clothing, makeup, or other physical markers” and “sings, lip syncs, dances, or otherwise performs” in front of an audience.

The current definition of “sexually oriented businesses” includes any venue where two or more people perform nude and alcohol is served. Those businesses are bound by special limitations, including a misdemeanor charge on par with vehicle burglary for the business owner if anyone under age 18 is let in. Patrons must be charged entrance fees of at least $5 at such venues, according to Texas statutes, and sex offenders are barred from owning or operating such businesses.

Alejandra Caraballo, a clinical instructor at Harvard Law School’s Cyberlaw Clinic and a former staff attorney at the Transgender Legal Defense and Education Fund, said the wording of the bill “defines drag as essentially any trans person performing at all.”

“A trans actor in a musical singing would suddenly make it ‘drag’ and thus result in the play venue being labeled a ‘sexually oriented business,’” Caraballo tweeted Tuesday.

She added, “This is one of the most radical bills I have ever seen that seeks to completely eliminate trans people out of public life.”

The first official day of the Texas legislative session is Jan. 23. Republicans control both the House and the Senate.

dLocal: A Young Payments Business For The Watchlist