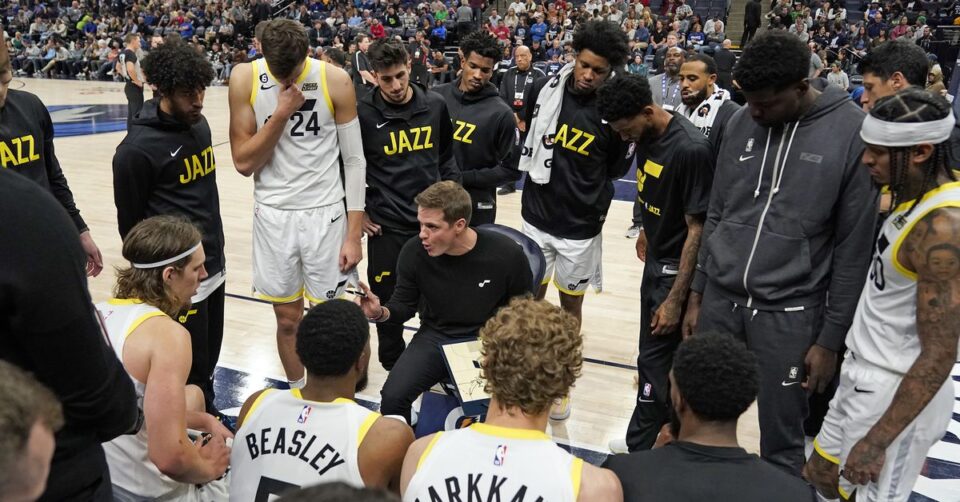 It’s hard to believe Will Hardy is a first-time NBA head coach. Then again, to look at him, it’s sort of hard to believe he’s a coach at all. At 6-foot-6 and still just 34 years old, it looks like he could lace up his Jordans and give Utah a few minutes at small forward.

But Hardy is right where he should be, navigating the surprising Jazz, a team many thought would be in full-on tank mode, to a 10-5 start.

After spending time as an assistant under Gregg Popovich in San Antonio and one season on the bench in Boston, Hardy has been given the keys by CEO of basketball operations Danny Ainge.

Say what you want — and people (probably mostly fairly) say a lot — Ainge has been a successful executive. While he only has one championship to show for it, Ainge built strong teams in Boston and left the Celtics in great shape both with their roster and leaving Brad Stevens to take over in his stead.

But this story isn’t necessarily about Ainge. In a weird way, he almost feels like Rebecca Welton from Ted Lasso or, for those of a slightly older age, Rachel Phelps in Major League. After trading away perennial All-Stars Rudy Gobert and Donovan Mitchell, it seemed like Ainge built this team to be uncompetitive in the hopes of landing French phenom Victor Wembanyama.

While we might never know Ainge’s true intentions with the roster he built, two things are clear: he picked the right coach for his team’s future and this group is having fun proving people wrong.

“It’s funny you use the word ‘enjoy.’ That’s a word that we use a lot,” Hardy said pregame Sunday, when asked if his team is “enjoying” exceeding expectations. “We want to enjoy this. … These guys playing in the NBA is a dream come true for all of them. For me, this is a dream come true. Like this is awesome. And so we try to enjoy every day.”

The Jazz roster is an Island of Misfit Toys. The trades for Gobert and Mitchell were seemingly about the massive, massive draft capital the Timberwolves and Cavaliers forked over. Still, players had to be moved by Minnesota and Cleveland to make the deals work.

Malik Beasley, Jarred Vanderbilt, Walker Kessler, and Leandro Bolmaro arrived for Gobert. Patrick Beverley was also in that deal, but was traded to the Lakers for a lottery ticket in the formerly-untouchable Talen Horton-Tucker. Lauri Markkanen, Collin Sexton and Ochai Agbaji came to Utah in the Mitchell deal. Kelly Olynyk was acquired from Detroit in the much less blockbustery trade for Bojan Bogdanovic.

Then there are the leftover veterans that were likely dangled to contenders this offseason. Mike Conley and Jordan Clarkson were a big part of the Jazz’s success over the previous three seasons, and Rudy Gay seemed like a strong signing ahead of the 2021-22 season to solidify the team’s bench.

“It’s been unique,” the 35-year-old Conley said. “I’ve never been a part of a team quite like this where we’ve got a lot of youth but we do have a lot of experience at the same time and a lot of guys who are really good at their roles. You put that all together and you can put together a pretty good team.”

Whether intentional or not, Utah built a deep and balanced roster with veterans that can still contribute and young players that are breathing life into the team.

“It’s very helpful to have a lot of guys that you feel like you can go to and mix and match,” Hardy said. “It’s even more helpful to feel like you have a team that’s bought into the notion of, it could be anybody’s night, the closing lineup could be different every single night. Nobody feels like they’re stuck in a set rotation. And our guys have been very flexible in their thinking every night with that.

“So, it’s not just having the depth, it’s having a group of guys that are bought into doing whatever it takes on that night to try to get the win. And understanding that as a coach, I have to make adjustments as the game goes.”

And that almost feels like Utah’s secret sauce so far — “it could be anybody’s night.”

The Jazz have eight players averaging at least 7.8 points a game. They only have one player averaging over 20 — Markkanen at 21.8. As a team, they move the basketball, leading to the seventh-best assist percentage in the NBA. They also fit the modern NBA, jacking up a ton of threes (39.8 per game, fourth-most in the league) and making them (37 percent, good for ninth). That’s led to an offense rated in the top five.

But they’re also a top-10 defense through 15 games, despite allowing Joel Embiid to drop 59 on them the other night. Players like Vanderbilt and Olynyk have added a little sandpaper to the mix, balancing with the team’s more offensive-oriented players.

It’s early, but their recipe for success is working.

It’s only 15 games. This team will face adversity. They might even face a situation similar to the 2018-19 Clippers. While exceeding expectations and in the thick of a playoff race, L.A. traded Tobias Harris, who was having a borderline All-Star season, to Philadelphia. Harris was a pending free agent and the Clippers understood that simply being a playoff team wasn’t enough.

Might Ainge see an opportunity to improve his team’s future by moving someone like Conley or Clarkson? Or will this team get a full season together like the Chris Paul-led 2019-20 Thunder team that surprised many with a run to the postseason?

For now, this team is focused on what it can control and not buying into the hype of a few early-season wins.

“We’re all new to each other still, even though it’s been only a month into the season,” Conley said. “It’s basically 14 new guys playing together. So, we’re trying to figure each other out as we go and got a lot of room to improve.”

But there’s a balance there, according to Hardy. No, they don’t give teams trophies for smashing outside expectations in November, but embracing and enjoying the moment can be beneficial during a long NBA season.

“As far as the expectations, it has been fun,” Hardy said. “Our guys have bonded together really, really quickly. And they’re proud of the way that we’ve started the season. With that, we try to maintain that chip on our shoulder because all of us have been around the NBA and we know there’s a long way to go. But it’s OK to be proud of how you’ve played to this point. And so we try to have our guys embrace that. It’s on us as a staff to continue to teach and remind them that there’s still a lot that we can get better at and that we are in no way a finished product at this point.”

Why is it so hard for Tom Brady to say goodbye to the NFL?