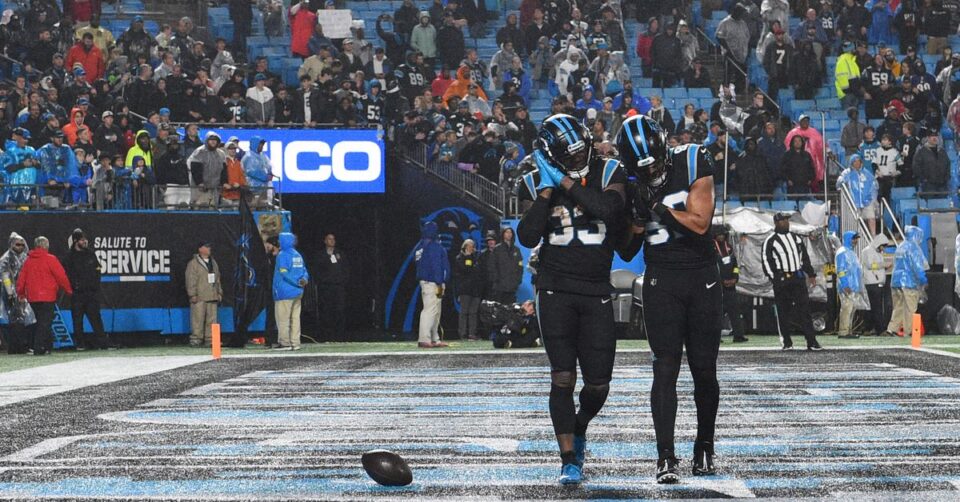 There is no team in the NFL with a more questionable future than the Panthers. Whenever you fire your head coach mid-season it goes without saying that there’s some uncertainty, but now as the team rounds the corner into the backend of the year it’s impossible to see what’s next for the organization.

Carolina has shown plenty of fight since Matt Rhule was axed after Week 5, with the team clearly responding to Steve Wilks’ interim leadership. That’s not a great thing. Obviously it’s better for team morale and makes Sundays a little more palatable for fans, but as we approach the end of the season the Panthers are playing their way out of a top-2 pick, drastically affecting their ability to land a reliable top-tier quarterback, and forcing the organization into potentially taking a dangerous risk.

As it stands the Panthers are 3-7 coming off a Thursday Night Football win over the Falcons, and are slated to draft No. 3 behind the Texans and Raiders. That is a horrible thing for the team’s future. Both Houston and Las Vegas will likely select quarterbacks, and right now it’s a tossup for who is No. 1 between C.J. Stroud and Bryce Young. Rest assured that whoever isn’t taken will go No. 2.

That’s where the safety at quarterback ends. This is a deep class of passers, but after Stroud and Young everyone requires a leap of faith. Will Levis is generally accepted as the third best QB. Why? Football scouts love him. Why? Nobody really knows. Levis has every tool you want on paper, but his on-field performance has not justified being taken in the top-10, let alone the top-3. Hendon Hooker out of Tennessee has the eye-popping stats and decision making you want to see, but the offense he’s coming from really doesn’t translate to the NFL. “Leap of faith” isn’t something the Panthers need at quarterback. They need a reliable player to rescue them from the QB disaster that has marred this team since Cam Newton left.

Quarterback is really the beginning and end of the discussion about the Panthers’ needed improvements (for now), because really the team has pretty good bones outside of that. Even after trading Christian McCaffrey the team is running the ball well, tied 12th in the league in yards-per-carry, which is more of a testament to their offensive line than the ball carriers behind it. The receiving corps definitely needs help, though D.J. Moore is still a top-tier talent, while Terrace Marshall Jr. is developing into a solid second or third option.

Defense is still where this team really shines. Yes, their absolute collapse against the Bengals in Week 9 was ugly, but make no mistakes: The team still has good potential on the defensive side of the ball. They’re 7th in the league against the pass, 14th against the run. Carolina’s secondary is strong, their linebackers are extremely good, and their pass rush is solid.

None of this matters without a quarterback though. That’s the problem. By winning now, or at least competing, the Panthers are hurting their ability to fix the glaring problem that could take them from a 3-14 team, to a 10-7 team — with the potential of more additions getting them solidly back into the playoffs. Carolina is bad, don’t get it twisted, but it’s a specific kind of bad which is based more on uneven inconsistency than truly being an outright garbage team.

This makes the Panthers the ultimate comeback team, or the next to collapse into dust and be stuck there for years, as their remaining stars dwindle and either leave for free agency or get stuck in limbo. It all depends on what happens over the next seven weeks. Deep down it I believe the front office felt that trading McCaffrey would cement this team at the top of the draft, but that isn’t happening. The team keeps getting better, and that’s a problem.

Perhaps the return of Baker Mayfield is the poison this team needs to suck once more — but one thing remains certain: Carolina can’t continue to be bad at losing down the stretch if they want to win long term.