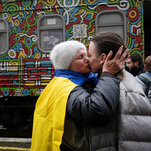 The train, carrying 200 passengers, is to be the start of regular service between the cities, a senior official said.

The first train from Kyiv, Ukraine’s capital, to Kherson since before Russia’s invasion arrived on Saturday after an 11-hour journey, a step in reconnecting the vital southern city a week after Ukrainian troops wrested control back from Russian occupation.

Train 102, which arrived in Kherson in the morning, carried 200 passengers and would be the start of regular service between the cities, Kyrylo Tymoshenko, a senior official in the president’s office, wrote in a post on the Telegram messaging app.

Videos posted on social media by Ukrainian officials showed the train departing to cheers and applause from people on the platform as triumphant rock music blasted over the loudspeakers.

“This is our victory train!” Mr. Tymoshenko wrote. “Like this train, we will return to Kherson everything for a normal life!”

Kherson was the first major city to be taken by Moscow’s forces after February’s invasion and remained under Russian control until Nov. 11, when Ukrainian troops entered the city to jubilant cheers from residents. Russia’s withdrawal from the city across the Dnipro River, pulling out of the only regional capital in its grasp, was a blow to President Vladimir V. Putin of Russia in his war.

In the months of occupation, the city’s residents were subjected to Russia’s campaign for assimilation and the suppression of Ukrainian identity. Accounts of harsh interrogations, torture and abuse at the hands of Russian soldiers have emerged in the days since Russia’s retreat.

Electricity and water were restored to the train station in Kherson before the train’s arrival, according to Serhii Khlan, the previously exiled deputy governor of the Kherson region. Officials said the train would travel from Kyiv to Kherson on even-numbered dates and from Kherson to Kyiv on odd-numbered ones.

Train service also resumed a few days earlier from Kyiv to Mykolaiv, a battered Black Sea port city near Kherson. Rail officials said at the time that reconnecting the link to Kherson was challenging because Russian forces in retreat had extensively mined the rails, leading to explosions that have injured at least nine railway workers in recent days.

Two days after Kherson was retaken, before the route had been secured, Ukraine’s national rail company began selling tickets to the city to be used once travel resumed. It also put up for sale aspirational tickets to destinations still under Russian occupation — Mariupol in the southeast, Donetsk and Luhansk in the east, and Simferopol in Crimea — with the proceeds to be used for transportation infrastructure projects.

Oleksandr Kamyshin, the rail company’s chief executive, wrote on Twitter that the resumption of rail was important because roads made muddy and impassible by snow and rain had hampered efforts to get aid to Kherson’s residents.

How Did AT&T’s $100 Billion Time Warner Deal Go So Wrong?