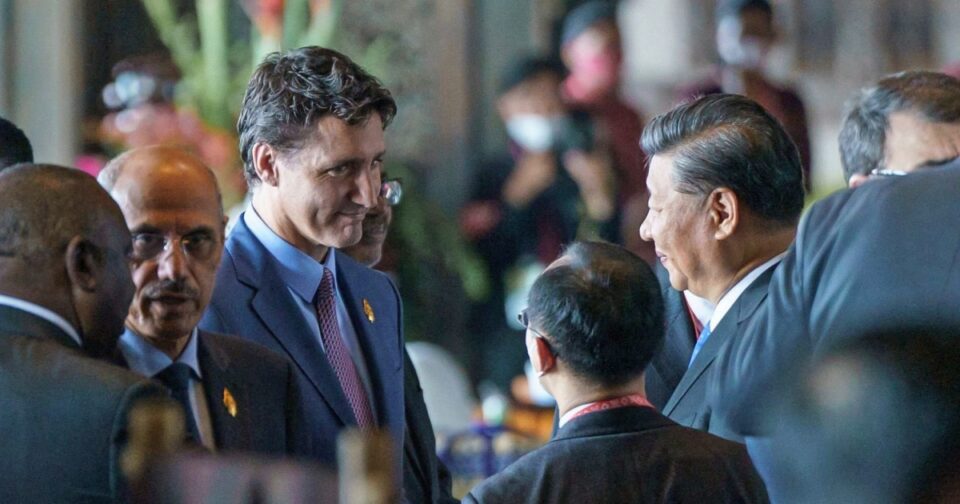 We have seen more than a few awkward moments lately for the world’s more ambitious autocrats. Russian President Vladimir Putin declared large swaths of Eastern Ukraine annexed during an elaborate ceremony in Moscow. Days later his troops were roundly routed and forced into a long retreat. The prime minister of Vietnam got comically caught on a live feed, provided by none other than the U.S. Department of State, making disparaging remarks about the American president and his team. Then there were the reported leaks about Canadian Prime Minister Justin Trudeau taking China’s President Xi Jinping to task for alleged malicious meddling in his country’s elections.

What these leaders most detest, as evidenced by Xi’s videotaped temper tantrum with Trudeau, is transparency. We should be working hard to ensure they have to publicly face more of those inconvenient truths.

That episode exploded into the public arena on Thursday when the media pool captured Xi upbraiding Trudeau at the Group of 20 summit in Indonesia for allegedly leaking to the press details of that private exchange, held on Tuesday. “Everything we discussed has been leaked to the paper. That’s not appropriate,” a smiling Xi said through a translator, according to the footage. “And that’s not the way the conversation was conducted.”

To his credit, Trudeau responded: “In Canada, we believe in free and open and frank dialogue, and that is what we will continue to have. We will continue to look to work constructively together, but there will be things we will disagree on.” Indeed, it’s standard operating procedure for democratic leaders to leak elements favorable to themselves to the press after meeting with foreign government officials.

Stepping out of their tightly controlled environments can be tough for these leaders. They cannot simply toss the journalists in jail, and their threats against Western nations are looking even more pathetically pyrrhic than usual. Leaders like Xi and Putin are starting to realize their limits, along with the liabilities that come with surrounding themselves with sycophants. Welcome to the free world.

What these leaders most detest, as evidenced by Xi’s videotaped temper tantrum with Trudeau, is transparency. We should be working hard to ensure they have to publicly face more of those inconvenient truths. Unfortunately and inexcusably, the Biden administration has underperformed on overexposure.

I remember when President Barack Obama went to Beijing. My colleagues in the press advance team, led by Johanna Maska, actually got Chinese officials to accept questions to their leaders from American reporters after their meeting. It made for a really remarkable moment, where The New York Times could publicly question the very same Xi Jinping about why his government was kicking the paper out of the country.

Ironically, for all his bluster, President Donald Trump’s team wasn’t that tough on Beijing when it came to basic things like this. Instead, they reverted back to the old, bad habit of not taking questions from reporters. Sadly, Biden hasn’t done much better. Obama held three times as many joint press conferences with world leaders at this point in his presidency.

The Biden administration came in claiming it would have the highest standards of transparency and would place human rights at the center of American foreign policy. It has not quite worked out that way. While they have great affinity for superficially strong statements and tweets, their actions belie a much more troubling trend. The State Department recently celebrated with numerous principled posts the importance of the International Day to End Impunity for Crimes Against Journalists. But it still provided Saudi Crown Prince Mohammed Bin Salman with precisely that kind of impunity for ordering the murder of journalist Jamal Khashoggi.

This is an ideal time for the Biden administration to expand press access. Xi is facing growing domestic pressure. The Vietnamese leader caught on camera was bragging about how easy it was to brush off American pressure to take a harder line on Russia. Let’s arrange to ask him a few more questions at the next global gathering.

American, but also European and other democratically elected leaders, need to push for more moments. Let journalists stay in the room longer. Provide more extensive briefings afterward. Go on the record instead of insisting on being referred to as an anonymous “official source.”

Autocrats are certainly not going to autocorrect. We need to see American and other officials modeling good behavior. Giving more interviews will put added pressure on a wide range of presidents, prime ministers and other heads of state to get themselves out more in front of the microphones. Advance teams need to insist on more press friendly setups and schedules.

Finally, the White House and State Department can give more honest readouts of meetings with foreign officials. Let us once and for all end comically vague language like, “We discussed important bilateral issues.” I can confess as a recovering diplomat that these are just a bunch of meaningless words we put out to fill space. Instead, write that we did tell the Chinese to stop killing Uyghurs and arresting protestors. Sure, just like Xi showed in Indonesia, it will temporarily ruffle some feathers.

But during my time at the White House, I saw how most of the time autocrats want these calls and meetings more than the United States does. They desperately seek the limelight and legitimacy only conferred by meeting with democratic leaders. It’s time we used our considerable leverage to make dictators and despots feel a little less comfortable when they deal with the world.

Brett Bruen was the director of global engagement in the Obama White House and a career American diplomat. He currently runs crisis communications agency the Global Situation Room and teaches crisis management at Georgetown.

The Global Population Is Aging. Is Your Business Prepared?

Republicans pitched an economic solution. Now they’ll have to deliver.