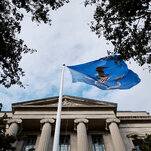 In appointing a special counsel to investigate former President Donald J. Trump, Attorney General Merrick B. Garland was, in theory at least, trying to insulate the matter from politics as much as possible.

That notion, of course, did not even last the day. Within hours, the newly named special counsel, Jack Smith, came under fire from the Trump team as just another partisan inquisitor.

The reality is that a special counsel was never going to be accepted by Mr. Trump or his most fervent supporters as a credible, independent investigator, which the attorney general surely knew. Mr. Garland, who has spent more than three decades as a federal prosecutor and judge, was applying an old-fashioned method in a new-fashioned world, following what he felt was the clear mandate of the traditional rules even if they no longer seem adequate to the political moment.

Indeed, the regulation establishing the special counsel never anticipated a president who operated so far out of the country’s norms, and perhaps laws, as Mr. Trump.

No matter how nonpartisan Mr. Smith’s résumé and record may be, Mr. Trump will argue that he is being unfairly investigated by agents of President Biden, the man he plans to run against in 2024. By doing so, Mr. Trump aims to discredit any possible criminal charges against him for his role in instigating the Jan. 6, 2021, attack on the Capitol or his refusal to return government documents he took when he left office.

“In our intensely polarized society, people are quick to believe the worst about their political opponents,” said Joshua Matz, who served as counsel to House Democrats in both impeachments of Mr. Trump. “As a result, no politically sensitive investigation can fully escape charges of partisanship.”

Still, he argued, to those with open minds, the appointment of a special counsel “sends the clearest signal possible within our divided society that these investigations will be carried out fairly.”

As it happens, many of Mr. Trump’s critics were as unhappy with Mr. Garland’s decision as Republicans, albeit for different reasons. Given that a special counsel will not convince many of the former president’s supporters of the legitimacy of the investigations, they argued that there was nothing to gain by turning them over to Mr. Smith, which could slow down resolution of the matters.

Anticipating the criticism, Justice Department officials insisted that the handover would not slow the inquiries and Mr. Smith vowed in a statement that “the pace of the investigations will not pause or flag under my watch.”

Indeed, some former government lawyers said it was possible that Mr. Smith’s appointment signals that Mr. Garland has already made a fundamental threshold decision — that he is willing to prosecute a former president and presidential candidate if the evidence is there. Otherwise, this theory goes, there would be no need for a special counsel.

Of the two investigations confronting Mr. Trump, several lawyers said, the one looking at his actions leading up to the Jan. 6 attack involves more consequential issues but may be harder to prove. The one examining the government documents is narrower and less profound, yet perhaps a clearer case in terms of obstruction of justice. Even some lawyers who have been allied with Mr. Trump have said he faces serious legal jeopardy in the documents case.

While Mr. Smith will now evaluate the evidence and make recommendations, it will still fall to Mr. Garland to make the ultimate decision whether to bring an indictment in either case.

The history of independent prosecutors over the past half century is a torturous one in which the nation has never found a durable, nonpolitical means for holding rogue presidents or other high officials to account.

During Watergate, President Richard M. Nixon was initially investigated by Archibald Cox, a special prosecutor appointed by the Justice Department. But because the special prosecutor ultimately worked for the attorney general, he was not truly independent, as Nixon showed by ordering Mr. Cox fired in 1973 in what became known as the Saturday Night Massacre. Under pressure, Nixon agreed to the appointment of a successor, Leon Jaworski, a dogged prosecutor who uncovered the secret tapes that led to the president’s resignation.

In hopes of protecting future prosecutors from Mr. Cox’s fate, Congress created the independent counsel in 1978, an officer who would be more autonomous. If an attorney general determined there were credible allegations against a president or other high officer to be investigated, an independent counsel was selected by a three-judge panel. Such a prosecutor had more latitude, was obliged by law to report possible impeachable offenses by the president to Congress and could be fired by the attorney general only for “good cause” or disability.

Neither party ended up being all that happy with the independent counsel structure, becoming convinced it was a blank check that led to endless investigations. Republicans were soured by Lawrence Walsh, the independent counsel who investigated President Ronald Reagan and the Iran-contra affair, while Democrats grew disenchanted by Ken Starr, whose Whitewater investigation morphed into the impeachment of President Bill Clinton for lying under oath about an affair with a former White House intern.

By the end of Mr. Clinton’s administration, there were seven independent counsels investigating him or his top officials, and the law was allowed to lapse in 1999. Instead, the Justice Department created a regulation for the appointment of special counsels who would answer to the attorney general and therefore be less likely to wander too far afield.

But the experience of Robert S. Mueller III, the special counsel who investigated Mr. Trump’s campaign for ties to Russia, underscored for many the weakness of this structure as well. Since a special counsel reports only to the attorney general, it still falls to a president’s appointee to decide any legal action.

Because of a longstanding Justice Department opinion that a president cannot be prosecuted while in office — a judgment crafted under two presidents who faced allegations, Nixon and Mr. Clinton, and never tested in court — Mr. Mueller opted not to say whether he thought Mr. Trump had committed obstruction of justice even though his final report included evidence that the president had.

Moreover, the results of a special counsel investigation are not required to be released to the public nor even submitted to Congress. In the Russia case, Attorney General William P. Barr agreed to make public a redacted version of Mr. Mueller’s report, but only after framing its contents in terms favorable to Mr. Trump and declaring that there was no obstruction case, moves that drew howls of protest from Democrats.

If there has yet to be a structure, then, that has won wide acceptance as a rational and independent way to investigate a president or other important figure, the Mueller case demonstrated how hard it will be to ever separate politics from prosecutions. Even Mr. Mueller, a former F.B.I. director and lifelong Republican with an impeccable reputation as a straight shooter, saw his reputation marred by the relentless attacks from Mr. Trump and his partisans.

In November 2017, after Mr. Mueller had spent nearly six months as special counsel, 58 percent of Americans polled by The Washington Post and ABC News approved of his performance while 28 percent disapproved, a 30-point net approval. By February 2019, shortly before he sent his report to Mr. Barr, his approval rating had fallen to 51 percent and his disapproval had risen to 34 percent, for a 17-point net approval.

In particular, the polling indicated that Mr. Trump had considerable success in persuading Republicans that Mr. Mueller was not to be trusted. While the special counsel’s approval rating among Democrats remained essentially the same over the course of his tenure, Republicans disapproving of him grew from 44 percent to 69 percent.

Hoping to reprise that success, Mr. Trump and his allies were already marshaling their attack lines against Mr. Smith within hours of his appointment. Although Mr. Smith is a career prosecutor, the Trump team focused on his case against former Gov. Bob McDonnell of Virginia, a Republican convicted of corruption.

The Supreme Court unanimously overturned the conviction, rejecting Mr. Smith’s expansive interpretation of the corruption law, but that was a legal argument, not an assertion of bias on the prosecutor’s part.

Still, like Mr. Mueller, Mr. Smith will now be in the cross hairs from Mar-a-Lago. For a man charged with staying out of politics, he will find himself deep in the thick of it.

How Did AT&T’s $100 Billion Time Warner Deal Go So Wrong?