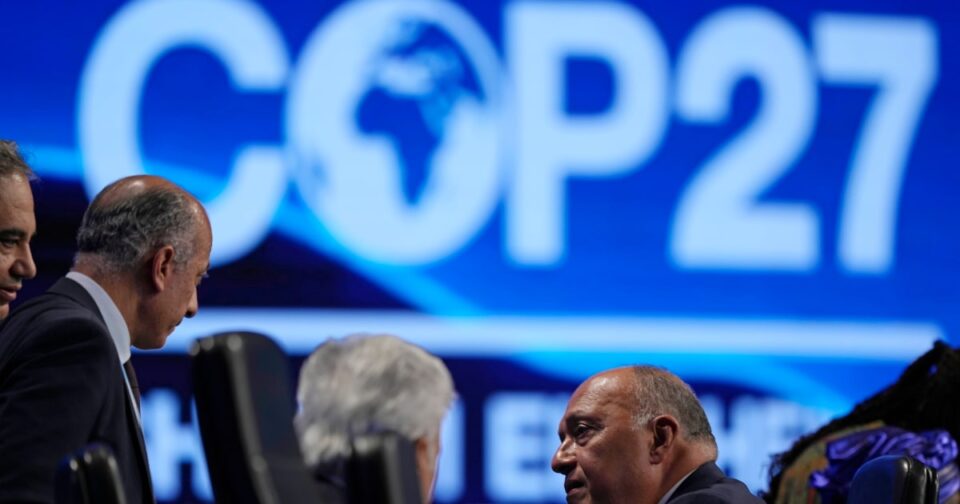 SHARM EL-SHEIKH, Egypt — For the first time the nations of the world decided to help pay for the damage that climate change has done to poor countries, but they finished marathon climate talks on Sunday with a deal that does more to address the impacts of the burning of fossil fuels than actually fight climate change’s root cause.

The decision establishes a fund for what negotiators call loss and damage. It is a big win for poorer nations which have long called for cash — sometimes viewed as reparations — because they are often the victims of climate-worsened floods, droughts, heat waves, famines and storms despite having contributed little to the pollution that heats up the globe.

The agreement struck at the United Nations environmental summit known as COP27 in this Egyptian Red Sea resort city is a victory for developing nations that have for decades fought for some form of compensation for the “loss and damage” they’re suffering due to floods, droughts, famine, heat waves and storms worsened by climate change despite emitting a small fraction of heat-trapping carbon pollution.

It has also long been called an issue of climate justice.

“Today, the international community has restored global faith in this critical process that is dedicated to ensuring no one is left behind,” said Antigua and Barbuda’s Molwyn Joseph, who chairs the organization of small island states that has been vocal on loss and damage. “The agreements made at COP27 are a win for our entire world. We have shown those who have felt neglected that we hear you, we see you, and we are giving you the respect and care you deserve.”

A deal of sorts came after a game of climate-change chicken over the cause of warming: fossil fuel burning.

Early Sunday morning, delegates approved the compensation fund but had not dealt with the contentious issues of an overall temperature goal, emissions cutting and the desire to target all fossil fuels for phase down. As dawn was breaking the European Union and other nations fought back what they considered backsliding in Egyptian presidency’s overarching cover agreement and threatened to scuttle the rest of the process.

The package was revised again and this time didn’t have what the Europeans would consider backsliding.

“It’s not as strong as we would like it to be but it does not break” with what was decided at last year’s U.N. climate conference, said Norway Climate Minister Espen Barth Eide. “It does not raise ambition further so that’s something we have to work with in COP28” next year.

This year’s talks “were very focused on the fund and less on the mitigation (cutting emissions) part,” Eide added.

The agreement includes a veiled reference to the benefits of natural gas as low emission energy, despite many nations calling for a phase down of natural gas, which does contribute to climate change.

The new agreement does not ratchet up calls for reducing emissions. But it does retain language to keep alive the global goal of limiting warming to 2.7 degrees Fahrenheit over pre-industrial times. The Egyptian presidency kept offering proposals that harkened back to 2015 Paris language which also mentioned a looser goal of 2 degrees. The world has already warmed 2 degrees Fahrenheit.

Nor does the deal expand on last year’s call to phase down global use of “unabated coal” even though India and other countries pushed to include oil and natural gas in language from Glasgow. That too was the subject of last-minute debate.

However, that fight was overshadowed by the historic compensation fund.

Harjeet Singh of the environmental group Climate Action Network International said the new fund had effectively “sent a warning shot to polluters that they can no longer go scot-free with their climate destruction.”

“From now on, they will have to pay up for the damages they cause and are accountable to the people who are facing supercharged storms, devastating floods and rising seas,” he said.

Outside experts hailed the decision as historic.

“This loss and damage fund will be a lifeline for poor families whose houses are destroyed, farmers whose fields are ruined, and islanders forced from their ancestral homes,” said Ani Dasgupta, president of the environmental think tank World Resources Institute, minutes after the early morning approval. “This positive outcome from COP27 is an important step toward rebuilding trust with vulnerable countries.”

“Quite a few positives to celebrate amidst the gloom and doom” of not cutting emissions fast enough to limit warming to 1.5 degrees, said climate scientist Maarten van Aalst of the Red Cross Red Crescent Climate Center, which responds to climate disasters.

It’s a reflection of what can be done when the poorest nations remain unified, said Alex Scott, a climate diplomacy expert at the think tank E3G.

“I think this is huge to have governments coming together to actually work out at least the first step of … how to deal with the issue of loss and damage,” Scott said. But like all climate financials, it is one thing to create a fund, it’s another to get money flowing in and out, she said. The developed world still has not kept its 2009 pledge to spend $100 billion a year in other climate aid — designed to help poor nations develop green energy and adapt to future warming.