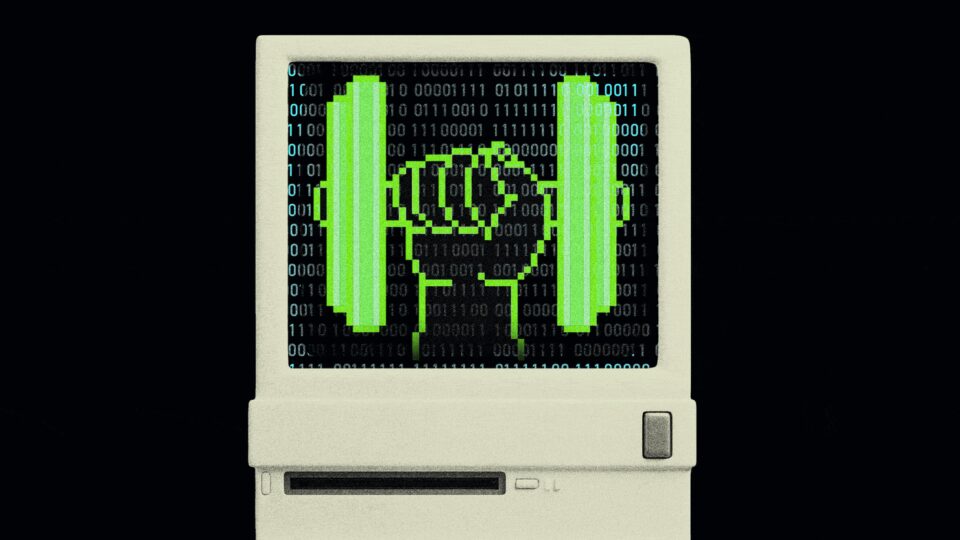 I’ve seen the future of fitness, and it’s moon-walking.

Well, more of a light jog to be precise. On a brisk Tuesday afternoon in November, I watched as Sid Raman, the founder of gym startup Roam149, jogged where no man has jogged before—the craggy lunar surface. A treadmill under his sneakers seesawed up and down to match the rugged incline of the terrain, which was displayed on a large TV screen in front of him.

Raman employed hand motions not unlike bike signals to speed up and slow down the treadmill—similar arm movements shifted his perspective on-screen, letting him explore the moon virtually while running in place. Angled just right, you could see the arc of a massive blue orb—the Earth—glowing in the distance.

It was serene and utterly weird, and unlike any treadmill workout I’d ever seen.

An avid trail runner, Raman began working on Roam149 in 2020, and it’s since become a passion project that dominates his waking hours. He holds patents on the two components of the company’s treadmill-screen exercise “pods”: the unique treadmill that tilts on a central fulcrum, and the software behind the on-screen environments. Outside of Roam149’s concept gym in Chelsea, a sign on the street implores passersby to experience “VR Workouts” including urban trail hiking, marathon race training, and of course, moon running. “Enter the Metaverse!” the website proclaims.

Whether the pods “count” as being part of the metaverse is a question of semantics to Raman. Critics, even his own engineers have griped to him, “There’s no Oculus Rift here. This is maybe mixed reality, but it’s not VR.”

“Right now, the metaverse is like the Wild West,” Raman told The Daily Beast. “You claim a piece of land, you put a fence around it, and you call it whatever you want. So we’re the ‘metaverse gym,’ and I’m proud to say that we might have a concept that truly marries what the metaverse is meant to be.”

Raman isn’t alone in trying to bring fitness to the metaverse—a portmanteau of “meta” and “universe” that means basically whatever you want it to mean but which Mark Zuckerberg and others in tech are aggressively marketing as a digital space of virtual worlds and social interaction. At one end, fitness companies are beginning to experiment with virtual and augmented realities, spurred in part by changes in consumer behavior during the pandemic. At the other, digital gaming companies are expanding into health and fitness, with grand ideas of an interconnected fitness metaverse (which involves NFTs, because of course it does).

It’s too soon to tell whether there’s enough consumer demand for these technologies to support an entire digital ecosystem—not to mention questions of advertiser interest and funding. But if Roam149 is any indication, the fitness metaverse could captivate new users and make the experience of exercising more accessible and compelling.

Raman is betting on that future—literally. He has launched Roam149 with his own savings.

“So far, it’s been self-funded. Incredibly smart or incredibly stupid—time will tell,” he said, grinning.

If Roam149 is any indication, the fitness metaverse could captivate new users and make the experience of exercising more accessible and compelling.

Lisa Edwards has shepherded companies through several of the tech industry’s radical transformations thus far. After studying computer science and computer information systems at Arizona State University in the late 1990s, she worked on a team at Motorola tasked with bringing watchable content to cellphones.

“People thought our team was a bit crazy—they thought that people would never watch movies on their phones,” she told The Daily Beast. The Motorola team was laid off before iTunes debuted to make it easy to download media, and better mobile hardware made it possible to watch on the go. But Edwards has continued to work in emerging technologies ever since.

Now, as the digital innovation director for Les Mills International, a New Zealand-based fitness company, she helped create a VR boxing app that launched in February for the Meta Quest 2.

Bridging the worlds Les Mills already inhabited—in-person and on-demand fitness classes—with the metaverse and VR technologies was a chance for the company to reach customers looking for a new way to work out, and to be an early adopter in a new sector, said Edwards. “Fitness in the virtual reality space has already been done at a light scale, but it’s always been gaming companies that were trying to dabble in fitness, never a fitness company that was partnering with somebody who knew how to build a VR game,” she said.

Gamified fitness has been a successful feature of gaming consoles stretching as far back as 2009’s Wii Fit, one of the best-selling video games of all time. But the yoga, strength training, balancing, and aerobics exercises in Wii Fit are no substitute for a traditional workout. Multiple analyses have shown that players’ heart rates did not climb as high as recommended levels for cardiorespiratory fitness, nor could any of the exercises be considered high-intensity activities.

In contrast, Les Mills’ BODYCOMBAT VR app was designed to mimic a workout first, and the games and points were added in after, Edwards said. This means that users have to execute a mix of punches and squats to complete levels, even though an accurate punch can yield more points than a well-timed squat.

“We created our workouts in a very similar way to what we do offline, so it’s not just about what’s going to get you the most points if you hit the hardest, but what’s actually going to make you fitter, stronger, and give you a full-body workout,” she said.

The development team did need to tweak a few features that would have worked well in an offline experience, like creating new kinds of punches to reduce monotony and eliminating jumping from the workout. So far, the app seems to be a commercial success: The company claims there are tens of thousands of monthly active users, and BODYCOMBAT launched on a second VR headset platform last month.

What’s been most surprising from Edwards’ perspective is that the app’s user base isn’t exclusively gamers and Les Mills superfans, though it has plenty of both. Some of the people downloading BODYCOMBAT have purchased VR headsets for their children, co-opting the device once they realized they could use it for a home workout.

“I thought some of the Les Mills audience was going to be untouchable due to the friction of having to buy a headset, but when they’ve already got it in the house because they’ve got teenagers, suddenly all they have to do is buy the game,” Edwards said.

To be clear, the company has no intention of migrating fully to the metaverse. Rather, like hybrid workplaces that allowed employees to work from home some days and go into an office others, Edwards said that Les Mills wants to meet consumers where they’re at. Gym-goers have come to expect fitness at their fingertips, but they also crave in-person connection and coaching—and right now, there’s no one solution that can fulfill both desires.

You’d be sorely mistaken if you thought I’d be content watching Raman on his patented treadmill experience without trying it myself. Once I was “onboarded” into a pod and shown the controls, I experimented by walking and running through a range of virtual environments—an outdoor track, a forest, and a grassland trail. The treadmill inclined and declined faster than any I’d ever tried, and I was advised not to let myself drift too far back or else the central fulcrum could tilt me to extremes. Each environment has unique and adjustable ups and downs—the moon scene, Raman said proudly, made the treadmill “dance like a bucking bronco.”

Externally, I was working my legs and core in what felt like a combination between a treadmill, stairclimber, and BOSU ball; internally, it felt different than a typical workout, too. I didn’t feel immersed in a nature hike the way I did when I climbed Mount Everest in VR, but I also wasn’t doing the thing I always do at the gym: body-checking.

Mirrors are more than an aesthetic wall-covering for gyms—many forms of exercise, including weight lifting, yoga, and dance, require you to evaluate your body’s position and adjust it to avoid injuries. But for many gym-goers, including University of British Columbia health and exercise science researcher Kathleen Martin Ginis, looking in the mirror can be charged with anxiety.

“I would exercise in gyms, and sitting there on the bike, running, or walking, I’d stare at myself,” Martin Ginis told The Daily Beast. “I realized that the longer I was on the treadmill, the more I was getting critical of myself.”

In 2003, Martin Ginis led a foundational study that tied the presence of mirrors during physical activity to 58 women’s feelings about their bodies. Participants exercised for 20 minutes while sitting down either in front of a mirror or a wall. Martin Ginis and her co-authors found that regardless of the women’s starting level of body image concern, those who exercised in front of a mirror felt significantly worse about themselves than those who did not.

In VR, where you can be embodied by an avatar, or in a metaverse treadmill pod, users might not fixate as strongly on their perceived flaws.

“Given what we know about the gamification of exercise and distraction and how that influences people’s responses to exercise, this could be a really positive thing for a segment of the population,” Ginis said.

Still, there needs to be more work into realizing these benefits equitably—owning headsets or paying for gym memberships requires not only expendable income, but leisure time, too.

Raman, unsurprisingly, is full of ideas on how to expand the fitness metaverse’s reach. He is working on adapting the pod experience for wheelchair users, and even showed me a prototype of a warmup that lets users walk through a virtual supermarket. One day, he envisions it could function like an actual store, so people wouldn’t have to choose between shopping for groceries and going to the gym.

I don’t know if that vision is more akin to dystopian science fiction than a benevolent prediction of the future, and neither does Raman. The legacy of Roam149’s technology, he told me at the end of my visit, will depend on how, and whether, people use it.

“I’m a tech geek. I threw everything at a wall—we’ll see what sticks.”