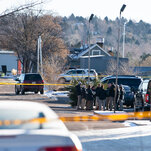 U.S.|Club Q Suspect Appears to Have Been Accused of Threatening Mother With Bomb

A man with the same name and age as the club shooting suspect was arrested in June 2021 after police negotiators persuaded him to surrender.

The man identified by authorities as the suspect in the nightclub shooting in Colorado Springs Saturday night appears to have been arrested last year, accused of engaging in a lengthy standoff with the police after threatening to hurt his mother with a homemade bomb.

A man with the same name and age as the club shooting suspect, Anderson L. Aldrich, was arrested in June 2021 after police negotiators managed to persuade him to walk out of a house and surrender — but not before the police had evacuated residents from about 10 nearby houses in a suburban neighborhood just outside of Colorado Springs, because of the possible bomb threat.

The police have not said whether the shooting suspect and the man arrested in 2021 are one and the same.

In the earlier incident, the man’s mother had called the police and said that she was not with her son and did not know where he was, but that he had threatened to hurt her with a bomb, ammunition and other weapons.

Mr. Aldrich was charged with several crimes after that arrest, including felony menacing and three kidnapping charges. It is unclear whom he was accused of kidnapping.

The police said in 2021 that they had not found any explosives. A spokesman for the El Paso County district attorney declined to say on Sunday how the charges were resolved.

Leslie Bowman said in an interview that the frightening 2021 incident took place at her home, where she had been renting a spare room to Mr. Aldrich’s mother, Laura Voepel. Ms. Bowman said she was away from the house during the 2021 incident.

“His mom had called me and said, ‘Don’t come home right now, there are some people looking for Andy,’” Ms. Bowman recalled, using Mr. Aldrich’s nickname.

Two days after the incident, Ms. Bowman arranged to have Ms. Voepel move out of her home. “Once she was gone, I changed the code on the door, and I never saw or heard from her again,” Ms. Bowman said.

But about a month ago, she said, the police visited Ms. Bowman and said they were looking for Ms. Voepel to check on her welfare, though Ms. Bowman did not know why.

Ms. Bowman said she believed that Mr. Aldrich had been living nearby in a house with his grandparents while Ms. Voepel was renting the room. He would sometimes visit his mother and watch movies with her.

Ms. Bowman also remembered that Mr. Aldrich appeared to have an “aggressive side,” and recalled one instance in which his mother had a complaint about a repair issue in the bathroom. Mr. Aldrich slammed a door in Ms. Bowman’s face in anger over the incident, she said.

On Sunday, after the shooting, Ms. Bowman was left wondering why Mr. Aldrich may have been at large and able to get hold of a rifle, if he had been accused of the bomb threat.

“Why is he not in jail, after that happening?” Ms. Bowman asked. “After that initial day, police never reached out to me for additional information. I’m a Second Amendment supporter, don’t get me wrong. But for him to be out there, and have access to weapons after that incident, I don’t understand it.”

In Asian Town, Workers Who Built the World Cup Gather to Watch It

Qatar Embraced Its Big World Cup Moment, but Didn’t Like the Ending