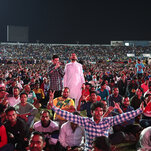 Qatar’s big show would not have been possible without migrant workers. On Sunday, thousands gathered to gaze at some of their work.

DOHA, Qatar — On the outskirts of Qatar’s capital and miles away from the stadiums and the sheen of the World Cup, thousands of true nation builders gathered in a fenced-off parking lot at Asian Town, between a mall and a cricket stadium.

They were a cross-section of migrant workers, mostly men on a night off, crowding to watch Qatar open the World Cup, cheering for a country that does not always recognize them.

They aimed their phone cameras at a gigantic video screen to record the opening ceremony, knowing they had played a part in the show.

And when kickoff approached, thousands squeezed themselves into the narrow gates of the 13,000-seat cricket stadium with enough energy to make security guards nervous. Just as those funnels cleared, thousands more people flooded into the fan zone and then into the stadium, excited to find a vantage point from which they could see another huge screen displaying the action.

“I’ve been living here for eight years, and this feels like home,” said Al Amin, 29, a chef at a vegan restaurant who sends 60 percent of his wages home to his father in Bangladesh. He said he was rooting hard for Qatar, where he plans to live and to work for at least another year.

What is the World Cup? The quadrennial event pits the best national soccer teams against each other for the title of world champion. Here’s a primer to the 2022 men’s tournament:

Where is it being held? This year’s host is Qatar, which in 2010 beat the United States and Japan to win the right to hold the tournament. Whether that was an honest competition remains in dispute.

When is it? The tournament opened on Nov. 20, when Qatar played Ecuador. Over the two weeks that follow, four games will be played on most days. The tournament ends with the final on Dec. 18.

Is a winter World Cup normal? No. The World Cup usually takes place in July. But in 2015, FIFA concluded that the summer temperatures in Qatar might have unpleasant consequences for fans and players and agreed to move the tournament to the relatively bearable months of November and December.

How many teams are competing? Thirty-two. Qatar qualified automatically as the host, and after years of matches, the other 31 teams earned the right to come and play. Meet the teams here.

How does the tournament work? The 32 teams are divided into eight groups of four. In the opening stage, each team plays all the other teams in its group once. The top two finishers in each group advance to the round of 16. After that, the World Cup is a straight knockout tournament.

How can I watch the World Cup in the U.S.? The tournament will be broadcast on Fox and FS1 in English, and on Telemundo in Spanish. You can livestream it on Peacock, or on streaming services that carry Fox and FS1. Here’s how to watch every match.

When will the games take place? Qatar is five hours ahead of London, eight hours ahead of New York and 11 hours ahead of Los Angeles. That means there will be predawn kickoffs on the East Coast of the United States for some games, and midafternoon starts for 10 p.m. games in Qatar.

Qatar is a land of such migrants, mostly poor laborers from far away places who have built a country and an economy for the rich. There are about 300,000 Qatari citizens in a country of about three million, meaning somewhere close to 90 percent of the population is from somewhere else. Most migrants come from South Asia (particularly Nepal and India) and Africa, and there is little chance of citizenship for outsiders.

So much of the arguments against holding the World Cup in Qatar have been made on their behalf. The points are relegated to shorthand — migrants pulled like magnetic filings from poorer places to do the thankless, low-paying and sometimes deadly work of building the infrastructure of wealth and sports and keeping it going. It is a system, not wholly unlike others around the world, that sees the migrant worker as disposable, if it sees them at all, and unworthy of equal rights, even a voice.

But they made some noise on Sunday evening at a fan zone about 45 minutes and a world away from Al Bayt Stadium in Al Khor, where Qatar made its World Cup debut.

They cheered at the kickoff, groaned at Ecuador’s early goal and cheered more when a video-replay decision erased it.

In the middle of it all, they laughed with friends and co-workers. They made FaceTime calls home. They aimed their cameras at the big screen and took selfies.

Unlike the fans crowding the tourist areas of Doha, they were mostly unadorned by team jerseys and other totems of fandom. But a few Qatar jerseys freckled the crowd.

Most migrant workers live far from the gleaming city center, where foreign visitors convene near the wealth and the air-conditioning, and where towers sprout near the Persian Gulf like glass stalks, glistening in the relentless sun or shining like neon crayons at night.

Migrant workers are mostly flung to the sandy outskirts of Doha, in dusty islands divided largely by race and nationality. Hundreds of thousands of them live in the grim streets near Asian Town, in huge housing tracts glumly called the Industrial Area.

Much has been said and written in recent days and years about slow improvements made for migrant workers in Qatar. Since 2021, the country has had a minimum wage of 1,000 Qatari riyals a month, about $275, regardless of the job or the nationality of the worker.

Mohommad Faizan, 29, has been in Qatar for nearly four years, working as an air-conditioning technician. He sends money home to Sri Lanka, where he has a wife and a 6-month-old daughter he has not yet met. He plans to work a few more years in Qatar to pay for a house back home.

“I root for Qatar,” he said, “because my life is going on here now.”

Colorado Springs Shooting Suspect May Have Been Known to Authorities

How to navigate the tech world as a queer person