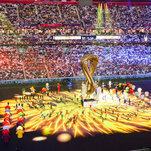 AL KHOR, Qatar — The highway stretches out into nowhere, its surface pristine, the soaring glass spires of Doha slowly receding in the distance. It passes the ghost city of Lusail, its cranes standing motionless in the desert air. For miles, there is nothing but asphalt and sand and sky, the horizon broken only by the colossal outline of the Al Bayt Stadium.

All day, fans had streamed toward it, choking the road with traffic, filling the cavalcade of buses that awaited them as they disembarked from Qatar’s box-fresh subway system, as if the stadium itself, an oasis of presence in a landscape defined by absence, exerted a kind of magnetism.

They came with flags wrapped around their waists and draped over their shoulders, with their faces painted and their jerseys proudly on display, a vision of international amity: not just Qataris and Ecuadoreans but Uruguayans and Brazilians and Mexicans and Ghanaians, too, all strolling through the perfect, artificial lawns that surround the stadium, meandering past babbling streams, leisure ponds lined with paddle boats and flocks of quite confused geese.

The fans had been waiting for this moment for some time. Qatar, on the other hand, has spent more than a decade actively generating it. The country has been planning for it, mapping it out, making sure every last aspect of it was just to its taste for 12 years, regardless of the cold, hard cost. It has committed somewhere in the region of $220 billion manifesting it, constructing not only stadiums and skyscrapers but entire cities and transport systems out of whole cloth to make it a reality.

And now, at last, it was here, the last word in Qatar’s attempt to announce itself to the world, to showcase all that it could do, all that it could build. Not just the stadium, its roof designed to look like a Bedouin tent, but the opening ceremony, too, something that is usually a reasonably subdued affair now transformed into a spectacular.

What is the World Cup? The quadrennial event pits the best national soccer teams against each other for the title of world champion. Here’s a primer to the 2022 men’s tournament:

Where is it being held? This year’s host is Qatar, which in 2010 beat the United States and Japan to win the right to hold the tournament. Whether that was an honest competition remains in dispute.

When is it? The tournament opened on Nov. 20, when Qatar played Ecuador. Over the two weeks that follow, four games will be played on most days. The tournament ends with the final on Dec. 18.

Is a winter World Cup normal? No. The World Cup usually takes place in July. But in 2015, FIFA concluded that the summer temperatures in Qatar might have unpleasant consequences for fans and players and agreed to move the tournament to the relatively bearable months of November and December.

How many teams are competing? Thirty-two. Qatar qualified automatically as the host, and after years of matches, the other 31 teams earned the right to come and play. Meet the teams here.

How does the tournament work? The 32 teams are divided into eight groups of four. In the opening stage, each team plays all the other teams in its group once. The top two finishers in each group advance to the round of 16. After that, the World Cup is a straight knockout tournament.

How can I watch the World Cup in the U.S.? The tournament will be broadcast on Fox and FS1 in English, and on Telemundo in Spanish. You can livestream it on Peacock, or on streaming services that carry Fox and FS1. Here’s how to watch every match.

When will the games take place? Qatar is five hours ahead of London, eight hours ahead of New York and 11 hours ahead of Los Angeles. That means there will be predawn kickoffs on the East Coast of the United States for some games, and midafternoon starts for 10 p.m. games in Qatar.

The show started with a homily to unity from Morgan Freeman — albeit one that included at least one or two pointed lines, seemingly directed at this tournament’s critics in Europe and North America — taking in the sweep of World Cup history and culminating with a new song by Jung Kook, the K-pop star who was, by several orders of magnitude, the most famous person in the stadium.

Qatar’s Emir, the man who was there right at the start of the project, brought all of the preparation to a close, welcoming all of the world to Qatar — “people of different races, faiths and orientations” — for an event being staged, he said, “for the good of all humanity.” The sentiment was rousing. The display was breathtaking. The applause was rapturous. This was Qatar’s fantasy, made flesh.

Then the soccer started.

Qatar’s project to build a team for this World Cup has paled in comparison and in cost to the rest of the country’s expenditure on the tournament. That should be no surprise: The purpose of this World Cup, after all, is not for the country to prove that it is a genuine sporting power. In its own way, though, its soccer preparations have been no less ambitious, no less extraordinary.

The country’s authorities had not only invested in some of the most advanced training facilities on the planet, ones that have become a constant port of call for teams from across the globe. They had embarked, too, on a global search to identify and train talent, building a network of academies in Africa, in particular.

At one point, Qatar invested in European club teams to provide the brightest prospects from its vast farm system with a taste of elite competition. It recruited expert coaches from the most revered youth academies and tasked them with teaching Qatari players the most sophisticated, most cutting-edge styles of soccer.

It had done it all with not just this tournament in mind, but this game, this single moment. This was its chance to prove that Qatar could at least match Europe and the rest of the world at their own game, that it could no less find a shortcut to success in sport as it can in almost every other field. This was not just the crescendo. This was the point.

And at the very moment that it arrived, when everything else was perfect, Qatar froze. Félix Sánchez, the country’s Spanish coach, has enjoyed no little success in his time in charge. In 2019, his team was crowned champion of Asia. It has competed, and emerged with some credit, from encounters with teams of similar standard and perhaps even more glamour than Ecuador.

Here at the World Cup, though, when it mattered, Qatar seemed overwhelmed: by the stage, by the pressure, by the weight of it all, by some combination of the three. Ecuador might have taken the lead after 158 seconds, through Enner Valencia, a veteran forward seeing out his career in Turkey, only to have the goal ruled out by the video assistant referee. The reprieve did not last. Valencia won and scored a penalty after 16 minutes, then scored again after a little more than half an hour.

Qatar could barely muster a response. The crowd fell silent, the only noise coming from the massed ranks of jubilant Ecuadoreans and a lone group of a few hundred fans behind one goal, all of them clad in uniform burgundy T-shirts, many of them with more tattoos than the average Qatari, their songs and their movements choreographed and obviously practiced.

They sang constantly, their loyalty to the Qatari cause admirably unyielding and apparently unaffected by events, their sound so detached from context that it retained no meaning, no significance.

The rest of the crowd, though, slowly began to drift away. After halftime, thousands of fans did not return to their seats. As the second half rolled to its inevitable conclusion — Ecuador comfortable, content to coast in low power mode — more and more followed them, those sections of the stadium not dominated by South Americans now not only pockmarked with vast tracts of empty seats.

Outside, those Qataris who had been drawn out here to the stadium in the desert were starting to make their journey away from it, leaving behind the oasis and striking out, on that pristine surface, into the asphalt and the sand and the sky. They headed toward once more to the shimmering city by the bay, a place designed to look as fantastical as possible, a place where everything has been done to ensure that cold reality does not intrude.

Colorado Springs Shooting Suspect May Have Been Known to Authorities

How to Say Thank You for Supporting My Small Business

In Asian Town, Workers Who Built the World Cup Gather to Watch It