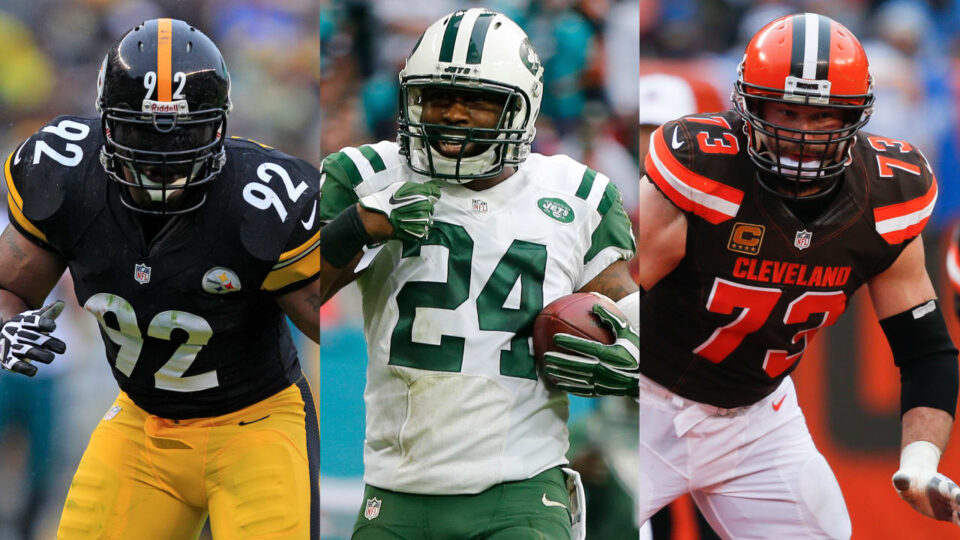 I love the Pro Football Hall of Fame. I really don’t love having to rank the 28 semifinalists for the Class of 2023.

Providing a pecking order for this list, which was publicly revealed on Tuesday, is an impossible task. I watched most of these players growing up, and I have an affinity for all of them. But sometimes in life, you have to make tough choices. So this is my plight. Guess it’s time to take the plunge.

Before diving in, though, I want to be perfectly clear about one thing: THIS IS MY PERSONAL RANKING. It is not a predictions piece. I’m judging this by what I saw on the field and what I know about NFL history. I also really, really love Devin Hester.

26) Hines Ward, WR (Pittsburgh Steelers, 1998-2011): Super Bowl MVP. Six-time 1,000-yard receiver. Punishing blocker. He also appeared in a Batman movie. Great career. He should be celebrated in the Pittsburgh community. But like I said above, we have to make some tough decisions — and I have other receivers higher than Hines.

25) Fred Taylor, RB (Jacksonville Jaguars, 1998-2008; New England Patriots, 2009-2010): Taylor was a stud running back with seven 1,100-yard rushing seasons and over 11,500 rush yards for his career. And I always have to answer to my colleague (and Fred’s former teammate) Maurice Jones-Drew for having Taylor so low on this list. Personally, I prefer Chris Johnson or Eddie George — neither of whom made the semifinalist cut this year.

23) Ronde Barber, CB (Tampa Bay Buccaneers, 1997-2012): I love Ronde. I really do. But look at the CBs of his era: Deion Sanders, Rod Woodson, Darrell Green, Aeneas Williams, Charles Woodson and Champ Bailey. That’s going to be a tough room to crack. And it’s why making these lists is so difficult at times.

21) Albert Lewis, CB (Kansas City Chiefs, 1983-1993; Los Angeles/Oakland Raiders, 1994-98): One of the fastest players in the game. Exceptional defensive back and special teams player. He was a two-time first-team All-Pro. He deserves an extra look because he was great — dude had 42 INTs, after all — but he has some fierce competition.

19) Rodney Harrison, S (San Diego Chargers, 1994-2002; New England Patriots, 2003-08): Some people didn’t like his style of play. Not me — I loved the way he competed. Harrison was a two-time first-team All-Pro and also won a pair of titles with the Patriots. The man has a strong case.

17) Jahri Evans, OG (New Orleans Saints, 2006-2016; Green Bay Packers, 2017): Good to see a guard getting some love from the Hall voters. And maybe I’m part of the problem when it comes to this position’s lack of respect: Should a four-time, first-team All-Pro with a Super Bowl ring rank higher on this list?

16) Vince Wilfork, DT (New England Patriots, 2004-2014; Houston Texans, 2015-16): I’d love to see this two-time Super Bowl champ get immortalized in Canton. For the underrepresentation of his position. For the big-time personality. Dude was one of the best, in many ways.

14) Darren Woodson, S (Dallas Cowboys, 1992-2004): LeRoy Butler just got into the Hall of Fame in the Class of 2022, which was the right call, according to me. Woodson, another star safety and Super Bowl champion (three times!), was a criminally underrated part of the 1990s Cowboys dynasty.

12) Zach Thomas, LB (Miami Dolphins, 1996-2007; Dallas Cowboys, 2008): When you look at his contemporaries like Derrick Brooks, Ray Lewis and Brian Urlacher, I don’t know. Thomas seems to be on the outside looking in, despite his five first-team All-Pro selections. It’s as if the other three are Dave Gahan, Martin Gore and Andy Fletcher. Which would make Thomas the Alan Wilder of the group. (Even money says the editor had to look up who these four men are. But hey, they are still touring!)

11) Jared Allen, DE (Kansas City Chiefs, 2004-07; Minnesota Vikings, 2008-2013; Chicago Bears, 2014-15; Carolina Panthers, 2015): If you watched Allen ride a horse into the stadium during his induction into the Vikings Ring of Honor, well, that was so on-brand. In truth, though, I always thought of him as a Bear and barely remember his time as a Viking … (Dan Orlovsky, are you with me??) Joking aside, dude was a four-time first-team All-Pro, but now seems further away from the Hall call than before.

10) Andre Johnson, WR (Houston Texans, 2003-2014; Indianapolis Colts, 2015; Tennessee Titans, 2016): This will be a running theme, but I just don’t know what we are going to do with the WR backlog. I continue to be amazed by Andre’s credentials and actually had him leapfrog over Reggie Wayne from last year’s rankings. I feel like if Johnson wasn’t in Houston for all of those playoff-free years, this discussion would be quite different.

9) Torry Holt, WR (St. Louis Rams, 1999-2008; Jacksonville Jaguars, 2009): I’m a little shocked he wasn’t part of the Class of 2022. But when you look at how long it took Isaac Bruce to get in, then it makes a little more sense. Though I don’t think I’m telling tales out of school if I say I’d take Holt over Bruce. Again, I don’t know what the voters are going to do about all the receivers. I’m a big Holt guy, and he’s not even the highest receiver on my list.

7) DeMarcus Ware, OLB (Dallas Cowboys, 2005-2013; Denver Broncos, 2014-16): I mentioned in last year’s rankings that I kind of overlooked Ware’s career in the NFL. He’s deserving. In fact, I thought he should have gone in with the Class of 2022. This is where it gets murky this time around, though, because there are two first-year guys who absolutely must get the Hall call. And honestly, if Dwight Freeney gets the nod over Ware, I won’t be surprised. I won’t agree, but I won’t be surprised. The good news for Ware is he’s in the 100-sack club and he’s won a Super Bowl.

6) James Harrison, OLB (Pittsburgh Steelers, 2002-2012, 2014-17; Cincinnati Bengals, 2013; New England Patriots, 2017): I’d vote him in solely for those postgame workouts you’ve see online. The credentials are pretty good, too. Two-time Super Bowl champ. Two-time first-team All-Pro. 2008 Defensive Player of the Year. Played for the Steelers, which the voters love. He has a great shot.

5) Steve Smith Sr., WR (Carolina Panthers, 2001-2013; Baltimore Ravens, 2014-16): I should point out that I do not only have a working relationship with Steve, but I consider him a friend. I don’t want to deceive anybody. But just to make sure I’m not completely biased, I always lean on this piece written by another friend of mine, the late, great Chris Wesseling. One of my favorite times of the year is going back and enjoying that gem all over again. I’ll share it another time when Steve gets the nod in February.

4) Patrick Willis, LB (San Francisco 49ers, 2007-2014): I don’t get this. The Hall of Fame voters really need to explain this one to me because I don’t get it. He should have been in as a first-ballot guy. Defensive Rookie of the Year in 2007. First-time All-Pro five times in his eight NFL seasons. That’s crazy. Sincerely, I want to know what’s wrong with this man’s candidacy. I dug up this story right here, which has a voter saying it’s hard for a defensive player to make it to Canton without a Super Bowl ring. I kind of hope that isn’t the case — because that does hurt a lot of résumés, even if it’s realistically out of the player’s control — but I get it. That said, if there is one person who should absolutely break that rule, it’s Willis. He was so crazy good.

3) Darrelle Revis, CB (New York Jets, 2007-2012, 2015-16; Tampa Bay Buccaneers, 2013; New England Patriots, 2014; Kansas City Chiefs, 2017): Oh, man — Revis Island is going to be a first-ballot Hall of Famer. There is no doubt. If Super Bowl titles really mean that much to the voters, Revis is automatic because of his one year in New England. But for me, he was the best shutdown corner I’ve seen since Deion Sanders. And maybe Rod Woodson. If you’re getting compared in such light to Hall of Famers, you are one.

2) Joe Thomas, OT (Cleveland Browns, 2007-2017): There was no Super Bowl win for Joe. In fact, his Browns won a single game over his final two seasons in the NFL. But there is no doubt in my mind he was one of the most dominant linemen in NFL history. The guy went years without missing a snap. And he was as reliable as a Cleveland snowstorm. Six-time first-team All-Pro and two-time second-team All-Pro — in 11 seasons. I get worried about the voters sometimes, I really do. But this seems like one they can’t mess up.

1) Devin Hester, WR/ST (Chicago Bears, 2006-2013; Atlanta Falcons, 2014-15; Baltimore Ravens/Seattle Seahawks, 2016): If you’re familiar with me at all, you know my feelings on this. Devin should be in the Hall of Fame. If you were a sentient human being during his era, you know he was one of the most feared players in the entire sport. Tony Dungy fretted over what to do about him prior to the Super Bowl (probably should’ve have opted against kicking to him). The late Dennis Green went viral after Devin won a game against him. Keeping Hester out of Canton is starting to get quite disrespectful. Let’s figure this out, shall we?