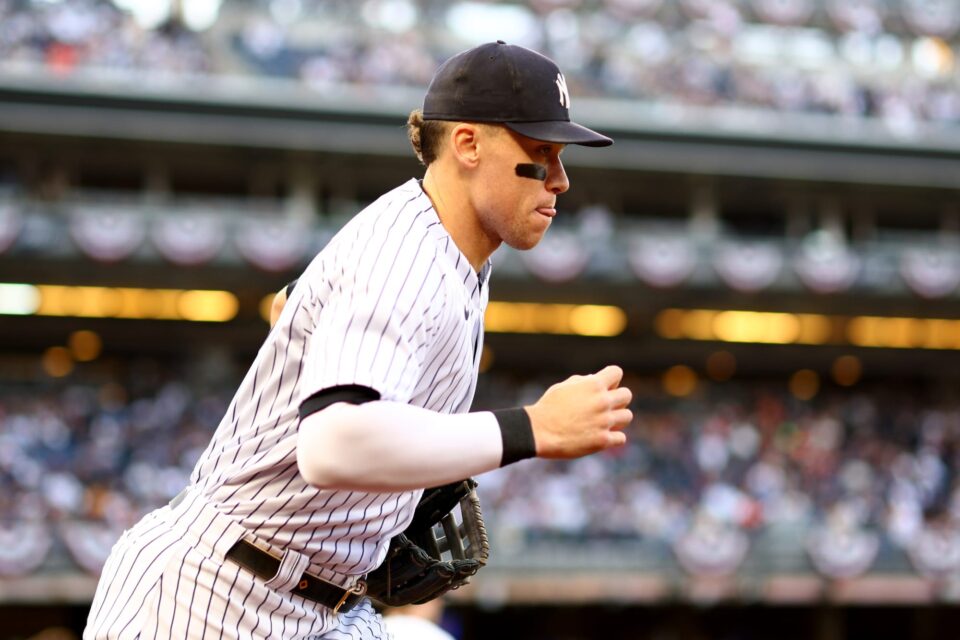 NEW YORK, NEW YORK – OCTOBER 22: Aaron Judge #99 of the New York Yankees runs onto the field prior to game three of the American League Championship Series against the Houston Astros at Yankee Stadium on October 22, 2022 in New York City. (Photo by Elsa/Getty Images)

What should be the backup plan for the New York Yankees if Aaron Judge signs with the San Francisco Giants?

Keeping Aaron Judge around should be priority number one for the New York Yankees this winter, but it takes two to tango. The San Francisco Giants are expected to make a strong push toward signing baseball’s best slugger. He has already been spotted in the Bay Area.

Losing Judge would be near-catastrophic for the Yankees. How do you possibly replace 62 home runs on your roster?

In case the worst-case scenario does happen, it’s important for the team to have some backup plans. If Judge does end up returning home to Northern California or elsewhere, they can try to mask the 6-7 hole with these three backup plans.

Yankees backup plans if Aaron Judge leaves: Spend $40 million on two or three free-agent outfieldersJudge’s annual average salary should come in close to around $40 million on whatever deal he signs. Whatever the AAV ends up being, the Yankees should be committed to spending $40 million next year on outfield upgrades.

Re-signing Judge to around this much makes the most sense. What about spending $40 million on two or three other free agents?

The current Yankees outfield potentially lines up with Aaron Hicks in left field, Harrison Bader in center field, and Oswaldo Cabrera in right field. This is less than desirable, especially on the corners.

Signing free agent Brandon Nimmo for center field duties or a corner spot is one way to upgrade. They can even take a chance on Cody Bellinger for a year. There’s also Mitch Haniger available as a power-hitting option for the Yankees to consider. What about Michael Conforto who sat out all of last year?

All combined, the Yankees can snatch up two of those players for less than $40 million. Bellinger and Conforto would be two of the riskier moves. At least it would give the team a chance to reconsider their options for the following offseason.

Throwing money at the problem isn’t the only backup plan. The Yankees have a trade market to search through, too.