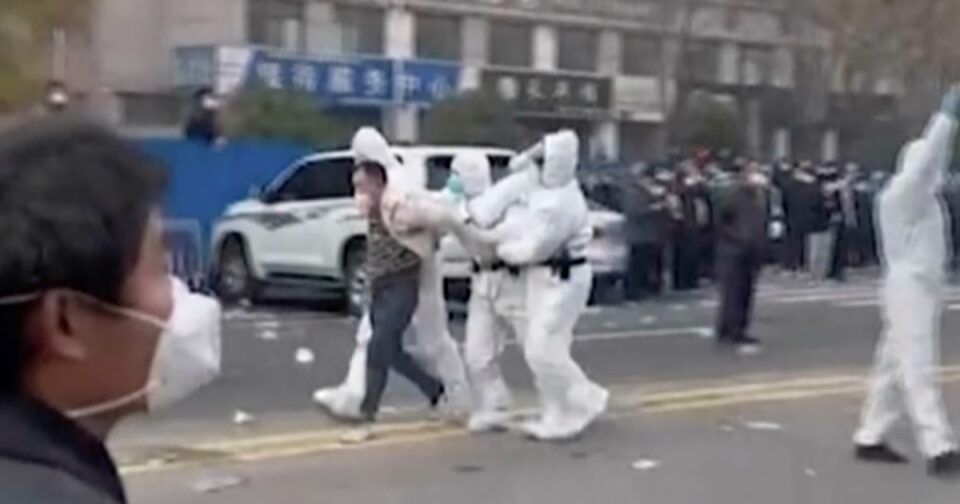 Violent protests have broken out in Zhengzhou, China, following contract disputes at the world’s biggest Apple iPhone factory, according to videos posted on social media and verified by NBC News.

The footage was taken near the Foxconn factory, in the streets of the Zhengzhou Airport Economy Zone, where large groups of people blocked roads during their protest. The videos circulated on Chinese social media, although several were taken down by censors.

The images show thousands of people in masks protesting against police in white hazmat suits with plastic riot shields. One video appeared to show a protester being repeatedly kicked and punched by authorities. Others showed protesters lying on the ground apparently after being beaten.

The protests come after Apple warned earlier this month that it had temporarily reduced iPhone 14 production at this factory because of Covid restrictions. Foxconn, a Taiwan-based company, is Apple’s main supplier and primary iPhone 14 assembly plant in China.

Managed by Foxconn Technology Group, the factory was previously under a “closed-loop management” system in which employees isolated themselves in dorms and worked in factories separated from the outside world.

Last month, hundreds of workers fled the factory to avoid Covid restrictions, quarantines and illness during an outbreak in Zhengzhou.

A Foxconn worker earlier this month described anger over Covid management and working conditions at the factory.

To keep production lines working, Foxconn has offered bonuses and higher salaries to lure workers back and to recruit new employees. Worker chat groups on Chinese social media said the protests started after an alleged pay dispute over bonuses expected from Foxconn. Reuters reported that it appeared Foxconn was delaying the bonuses.

The Foxconn factory has accommodation for over 350,000 people, but it is unclear how many employees are left working at the factory. The number of workers that were affected by Covid restrictions before they left the factory also remains uncertain.

Foxconn did not immediately respond to NBC News questions about the protest and the “grassroots cadres” arrangement for the factory in Zhengzhou.

Apple did not immediately reply to NBC News for a comment on the situation.

A record of 2,719 new confirmed Covid cases was reported in China in the past 24 hours, including 883 new infections in Guangdong, according to the National Health Commission of the People’s Republic of China. This poses a significant challenge to the dynamic “zero-Covid” policy that China has been adhering to.