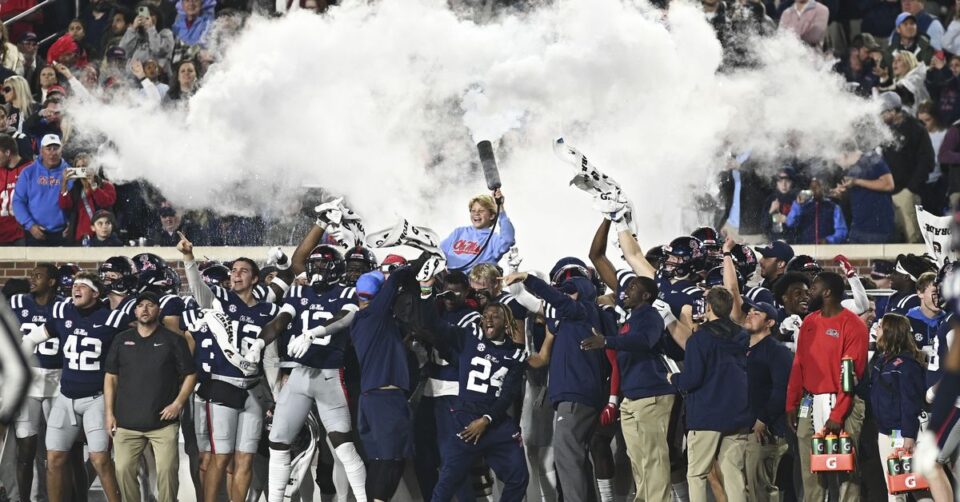 The Egg Bowl, the yearly rivalry game between Mississippi and Mississippi State, had a little bit of everything on Thanksgiving night.

Including some heavy rain, a Thicc Six, a Mississippi State player score a touchdown while injured, a 99-yard scoring drive at a critical moment, some controversy on a play that was reviewed twice, Lane Kiffin’s son wielding a fire extinguisher during a sideline celebration, and a fantastic finish.

We can start with the Thicc Six, and the subsequent celebration, which came late in the first half. After the Mississippi defense forced an interception, their offense drove down the field, deep into Mississippi State territory. But with Mississippi facing 4th and goal from the 1-yard line, Kiffin left his offense on the field.

Quarterback Jaxson Dart lined up under center, with big defensive tackle J.J. Pegues in the backfield behind him. Dart faked a handoff to the deep back, but pulled the football out and looked to the flat.

The touchdown extended Mississippi’s lead to 16-7, and touched off an epic celebration on the sideline.

But there was more to this game than just a Thicc Six and the subsequent celebration. Because as the fire extinguisher was being emptied, the Mississippi State offense was rolling down the field. Before you knew it, the Bulldogs were in the end zone, as quarterback Will Rogers found wide receiver Lideatrick Griffin for a touchdown just before halftime:

Then, the sky opened up.

The rain that had been forecast throughout the day finally rolled in during the second half, creating some sloppy conditions for both teams to contend with:

A breakdown in the secondary led to Thomas being wide open, and the receiver pulled in the throw for the touchdown to extend Mississippi State’s lead. But the scoring play came at a cost, as Thomas crashed to the turf in the end zone with an apparent left leg injury.

That did not stop him from exchanging pleasantries with the Mississippi fans seated in the corner of the end zone.

Mississippi desperately needed to get some offense going, as they had been held out of the end zone to that point in the second half and had gained only 16 yards of total offense to that point. But after picking up a first down early on their drive, some controversy was added to the list of everything the 2022 Egg Bowl had to offer. A throw from Dart to running back Jonathan Mingo hit the turf, and was recovered by Mississippi State, but the play was reviewed.

First the officials told us that there was an inadvertent whistle, and the down would be replayed.

But then the officials took another look, and the ruling was changed.

You make the call:

The student section did not take kindly to the decision, and debris rained down on the field. Eventually play would resume, with the Bulldogs nearly in field goal range after the turnover.

For a moment it looked like the Bulldogs were going to put the game away. A big run from Dillon Johnson got Mississippi State down near the goal line, and after that play was reviewed, Johnson was ruled just short of the end zone, and the Bulldogs faced a 1st and goal at the Mississippi 1-yard line.

But then, perhaps the weather showed up. Rodgers kept the ball on a zone read and put his head down for the end zone, but the Mississippi defense forced a huge turnover in a critical spot, forcing the ball free:

Mississippi had another chance.

But they would need to go 99 yards to tie the game.

Finally, they started to finally find their footing on offense. Dart connected with Malik Heath for a big 20-yard gain, and then the quarterback moved the chains on 4th and 7 by finding Jordan Watkins over the middle for an eight-yard gain. The catch from Watkins was rather impressive, coming with a defender draped all over his back.

They would face another fourth down a few plays later, a fourth and inches situation at the Mississippi State 35-yard line. They moved the chains on a direct snap to Quinshon Judkins, who burst around left end to pick up the first down.

Mississippi would reach the end zone on the next play:

Again, you see a bust in the secondary, as you can see the cornerback turn wide receiver Dayton Wade loose but the safety does not rotate over, and Wade is wide open for the touchdown.

With the drive having covered 99 yards, it was their longest touchdown drive of the season.

But the job was not done. Mississippi needed the two-point conversion to tie the game.

Kiffin called for a shovel pass to Judkins, but defensive tackle Randy Charlton tipped the flip from Dart, preventing the conversion:

Mississippi’s last chance was an onside kick. But as Matt Barrie and Louis Riddick said in the booth for ESPN, given everything that had transpired already in the Egg Bowl, a recovery was not out of the question.

But it was not in the cards.

J.P. Purvis recovered the onside kick, and as Barrie stated in the booth, it likely “put the Golden Egg 90 miles back in Starkville.”

It did, as the Bulldogs ran out the clock.

This year’s Egg Bowl gave us a little bit of everything.

Already looking forward to next year’s.