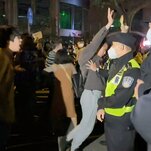 Protests spread to cities and college campuses around China on Saturday night, reflecting rising public anger at the country’s draconian Covid controls, with some in a crowd in Shanghai directing their fury at the Communist Party and its top leader, Xi Jinping.

The wider demonstrations followed an outpouring of online anger and a street protest that erupted Friday in Urumqi, the regional capital of Xinjiang in western China, where at least 10 people died and nine others were injured in an apartment fire on Thursday. Many Chinese people say they suspect Covid restrictions prevented those victims from escaping their homes, a claim the government has rejected.

The tragedy has fanned broader calls to ease China’s harsh regimen of Covid tests, urban lockdowns and limits on movement nearly three years into the pandemic. For much of that time, many accepted such controls as a price for avoiding the widespread illness and deaths that the United States, India and other countries endured. But public patience has eroded this year as other nations, bolstered by vaccines, moved back to something like normal, even as infections continued. And after years of enforcing the strict “zero Covid” rules, many local officials appear worn down.

The widening discontent may test Mr. Xi’s efforts to hold those rules in place.

“The demonstrations across the country have been like the spark that lit a prairie fire,” James Yu, a resident of Shanghai, said in an interview, adopting a Chinese phrase used to describe the spread of Mao Zedong’s Communist revolution. “I feel like everyone can make their voice loud and clear. It feels powerful.”

The biggest protest on Saturday appeared to be in Shanghai, where hundreds of people, mostly in their twenties, gathered at an intersection of Urumqi Road, named after the city in Xinjiang, to grieve the dead with candles and signs. Many there and elsewhere held sheets of blank white paper over their heads or faces in mournful defiance; white is a funeral color in China.

The numbers grew, while lines of police officers looked on, and chants broke out, with people calling for an easing of the Covid controls, video footage showed. Some used obscene language to denounce the demand that residents check in with a Covid phone app in public places such as shops and parks. Their shouts took on a boldly political edge.

Some also directed their anger at Mr. Xi, a rare act of political defiance likely to alarm Communist Party officials and to prompt tighter censorship and policing.

“Xi Jinping!” a man in the crowd repeatedly shouted.

“Step down!” some chanted in response. Many protesters used their phones to record the collective mourning and protests, images that may spread despite censorship, emboldening others to speak out.

The protest dispersed after more police officers moved in, dividing the crowd, and officers dragged some people away, according to Eva Rammeloo, a Dutch journalist who was there posting updates on Twitter.

But the night of public anger signals how his stringent Covid policies, initially heralded as a success for China after the pandemic spread globally from there in early 2020, are becoming a liability.

They have hurt restaurants, shops and other small businesses, worsening China’s economic slowdown. This month, thousands of factory workers angry over bungled lockdown measures and delays in payment of a promised bonus clashed with riot police and tore down barricades at a huge plant in central China that makes iPhones.

Officials continue to fear that unchecked spread of Covid, even in its less virulent forms, could lead to mass deaths. China’s domestically developed Covid vaccine is generally less effective than some developed abroad, but Beijing has not approved the foreign mRNA vaccines for domestic use. Many older Chinese people have resisted vaccination or booster shots, sometimes because they are wary of side effects, believe unfounded rumors about the risks, or feel they are safe from exposure to the virus.

Measured in Covid deaths and hospitalizations, “Chinese people have had the least impact from the pandemic,” the front-page editorial said. Officials and the public, it said, must “firmly overcome slackening and war weariness.”

This month, the government issued measures to ease the restrictions that have hampered travel and business. Yet local officials remain under intense pressure to keep infections near zero, leading to confusing flip-flops in rule enforcement. The resulting uncertainty over where China’s war on Covid is going and when it might end has fueled public frustration, as seen in Urumqi, Shanghai and beyond.

“There is only one disease in the world, that is, being unfree and poor, and now we have both,” a man in Chongqing, in southwest China, declared in a video that spread widely in the country in recent days despite censorship.

“Give me liberty or give me death!” shouted the man, whose identity is unknown but who quickly acquired the nickname “Super Brother” online.

Protests and mourning vigils also took place on at least three university campuses, according to online videos verified by The Times.

“Before I felt I was a coward, but now at this moment I feel I can stand up,” a young man who said he was from Xinjiang told a gathering at a campus of the Communication University of China in Nanjing, in eastern China. His comments were captured by a video that emerged online on Saturday night and whose location was verified by The Times.

Hundreds held up their phones like lit candles. He said, “I speak for my home region, speak for those friends who lost relatives and kin in the fire disaster.”

Smaller protests and vigils also occurred at Peking University and Wuhan University of Technology, videos, verifiable from the buildings in the background, showed.

A protest also broke out in another city in Xinjiang: Korla, in the region’s north. Hundreds of residents assembled at the prefecture’s government office, as seen in video footage that appeared online on Saturday evening.

“Lift the lockdown,” they shouted.

The Xinjiang region has been under intense security controls for years as part of the government’s long clampdown on Uyghurs, a largely Muslim ethnic group. But many protesters in Korla seemed to be members of China’s Han ethnic majority, to judge by their accents and appearance, as were many protesters in Urumqi, the regional capital.

During the night, an official came out and promised the crowd in Korla that lockdowns would be eased, prompting applause and shouts of welcome.

But before the latest demonstrations, the Xinjiang government had been warning residents that strict Covid measures remained necessary, and the security authorities there and elsewhere across China are also likely now to tighten monitoring and security in an effort to prevent further unrest.

“The pandemic risks have not been thoroughly eradicated, and the chains of transmission have not been totally broken, so the slightest relaxation may bring a rebound,” the Xinjiang leadership announced on Saturday. Officials, it said, must “sternly attack concocting and spreading rumors, inciting incidents, violently resisting pandemic control measures and other criminal conduct.”

In Shanghai, many neighborhoods have begun demanding that residents do frequent, often time-consuming Covid nucleic acid tests again — only days after announcing that tests would be seldom needed going forward. In that city, which endured a grueling two-month lockdown earlier this year in an effort to stamp out a Covid outbreak, the deadly fire in Urumqi appeared to reignite public anger over that episode.

“Yesterday, I saw about the fire tragedy in Urumqi and was crying all the time, and then I thought of the time when Shanghai was under lockdown this year,” said Kira Yao, a sales manager in Shanghai, who said she attended a candlelight vigil for victims of the Urumqi fire.

“Later we shouted ‘No nucleic acid tests, we want freedom’ and ‘No to health codes,’ and I and my friends cried — I felt like finally I could say what I’ve wanted to say.”