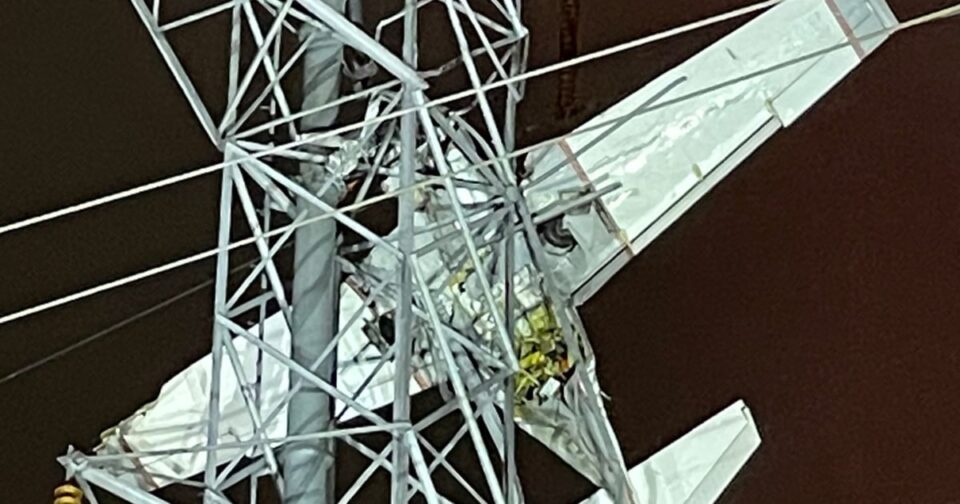 Two people were rescued early Monday from a small airplane stuck an estimated 100 feet above ground after it struck a high-voltage transmission tower outside Gaithersburg, Maryland, officials said.

The two suffered serious but non-life-threatening injuries and were rushed to trauma care following their rescue shortly before 12:30 a.m., Montgomery County Fire Department officials said at a news conference.

The two were initially thought to be unharmed, and they were communicating with first responders by cellphone as they awaited rescue, Maryland State Police and other officials said.

But authorities early Monday said that the pair suffered physical trauma during the collision, and that they may have also suffered from exposure while waiting for rescuers in 50-degree weather.

Officials said at a news conference that rescuing them was difficult because any power line near the wreckage needs to be tested in person to ensure it wouldn’t harm first responders or the two on board the plane.

“There is no other way to determine if it’s safe to access the tower until it is grounded or bonded, which means crews have to go up to the wires themselves to put clamps or cables onto the wires to then ensure that there’s no static electricity, no residual power,” Montgomery County Fire Chief Scott Goldstein said at an earlier news conference.

The Mooney M20J single-engine plane was reported down about 4 miles northwest of Montgomery County Airpark about 5:40 p.m. Sunday, according to troopers and the Federal Aviation Administration. The area is home to the community of Montgomery Village.

“Arriving troopers found the plane suspended in the air, entangled in a power line tower,” state police said in the statement.

They identified the pilot as Patrick Merkle, 65, of Washington, D.C., and the passenger as Jan Williams, 66, of Louisiana. The aircraft had taken off from Westchester County Airport in White Plains, New York, the FAA said in a statement.

Officials said about 120,000 utility customers in the area were without power at one point late Sunday, but power had been rerouted and restored to most by early Sunday.

Pepco, the Potomac Electric Power Co., said in a statement that its crews have responded to the crash site and worked with authorities to expedite the rescue and restoration of power.

The FAA and the National Transportation Safety Board are investigating the cause of the collision.

The intersection beneath the plane, Rothbury Drive and Goshen Road, will remain closed until the plane can be removed and power lines restrung, officials said.