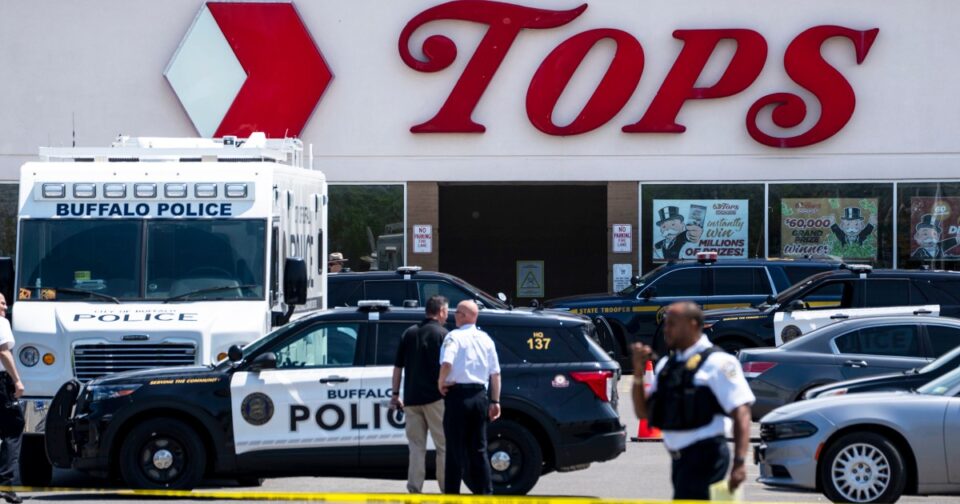 Live coverage of this event has ended.

A white gunman who targeted a grocery in Buffalo, New York, because it was the city with the most Black residents in closest proximity to his home, will spend the rest of his life in prison after pleading guilty to murder and hate crime charges in the May 14 shooting at Tops Friendly Market.

Thirteen people, including 11 Black people and two white people, were shot in the massacre, which the suspect had streamed on the social media platform Twitch.

Family members of the people killed and wounded in a racist grocery store shooting said Monday that it was not enough for the shooter to plead guilty, calling on lawmakers and others to acknowledge America’s history of racism and white supremacy.

Talley said he saw the gunman shoot his mother in the head when video of the mass shooting leaked.

“Am I happy he’s going to jail? It is what it is. That was automatically going to happen with the evidence mounted against him,” Talley said. “What would make me happy is if America acknowledges its racist history and the racism currently going on now.”

Garnell Whitfield Jr., whose mother, Ruth Whitfield, was among the victims, said “my mother didn’t deserve this, none of these people deserved this.”

“What is America going to do about the cancer of white supremacy? We’ve been putting band-aids on it,” he said. “Let’s stop pretending. The problem is white supremacy.”

Erie County District Attorney John J. Flynn said the white supremacist gunman who shot and killed 10 Black people in a grocery store was the first person in the state of New York to be found guilty of domestic terrorism motivated by hate.

The charge carries an automatic sentence of life without parole, the highest penalty in the state.

In a news conference Monday, Flynn laid out the evidence that authorities had against the 19-year-old shooter.

Flynn said the proof to the charges against the shooter would establish that the gunman “carried out a racially motivated attack fueled by white supremacist ideology, specifically targeting Black people.”

The shooting was captured on the store’s surveillance video as well as on a camera attached to a helmet that the shooter was wearing, which was used to live stream the attack.

That evidence “establishes beyond all doubt, the gruesome facts of the defendant’s conduct,” he said.

“It also establishes beyond all doubt, as required by the hate-crime enhancement and the elements of the domestic terrorism act count, the equally gruesome motive behind the defendant’s conduct,” he said. “In just over two minutes, the defendant, with the intent to murder as many African Americans as he could, killed 10 innocent Black people and attempted to kill three others.”

The attorney for the 19-year-old white man who killed 10 Black people at a Buffalo grocery store said Monday that the gunman’s guilty plea “represents a condemnation of the racist ideology that fueled his horrific actions on May 14.”

Attorney Brian Parker said that before his client is sentenced to life without the possibility of parole on Feb. 15, the families of the victims and those injured in the shooting would have the chance to address the court, the community and the gunman directly.

“It is our hope that a final resolution of the state charges will help in some small way to keep the focus on the needs of the victims and the community,” Parker said late Monday morning.

A 19-year-old man pleaded guilty Monday to a 25-count state indictment in the murders of 10 Black people in a racist mass shooting at the Tops Friendly Market in Buffalo, New York, his attorney, Brian Parker, said.

The grand jury indicted him on charges of domestic terrorism motivated by hate, 10 counts of first-degree murder, charges of murder and attempted murder as a hate crime and weapons possession.

“It avoids a lengthy trial that they believe would be very difficult for the families,” attorney Terrence Connors, who is representing victims’ families, said of the plea earlier this month. “I think it was pretty clear that they had no real defense.”

The shooter previously pled not guilty to federal hate crime charges that could be punishable by the death penalty, or life in prison. In that case, he faces 27 counts, including 10 counts of hate crimes resulting in deaths, three counts of hate crimes involving an attempt to kill, and 13 counts of using, carrying or discharging a firearm in relation to a hate crime.

Who were the victims of the Buffalo grocery store shooting?

Ten people were killed in May when a white gunman targeting Black people went on a racist rampage at Tops Friendly Market in Buffalo, New York.

Among the victims were Katherine Massey, 72, a community leader, and Aaron Salter Jr., 55, a retired Buffalo police officer and security guard at Tops.

A total of 13 people, including 11 Black people and two white people, were shot in the massacre.

The attorney for the families of the victims explained the rationale for the plead deal.

“It avoids a lengthy trial that they believe would be very difficult for the families,” attorney Terrence Connors said last week of the plea. “I think it was pretty clear that they had no real defense.”

Conors said he represents seven families who lost loved ones in the massacre at Tops Friendly Market carried out by Payton Gendron, now 19, and the families of two people who are seriously injured.

“Hateful acts of violence terrorize not only the individuals who are all attacked but entire communities,” Attorney General Merrick Garland told reporters in Buffalo when the charges were announced. “At the Justice Department, we view confronting hate crimes as both as our legal and our moral obligation.”