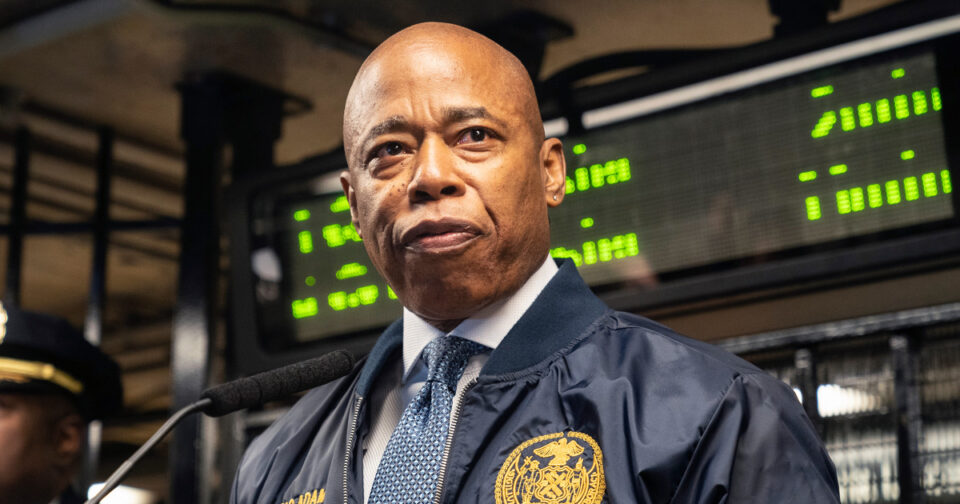 In a move he said is aimed at tackling the city’s mental health “crisis,” New York City Mayor Eric Adams on Tuesday unveiled a directive instructing police and first responders to remove individuals displaying severe symptoms of mental illness from the city’s subways and streets and to take them, even involuntarily, to area hospitals.

The directive, his office said, is in response to an “ongoing crisis of individuals experiencing severe mental illnesses left untreated and unsheltered in New York City’s streets and subways.”

“These New Yorkers and hundreds of others like them are in urgent need of treatment, yet often refuse it when offered,” Adams said at a news conference announcing his initiative. “The very nature of their illnesses keeps them from realizing they need intervention and support. Without that intervention, they remain lost and isolated from society, tormented by delusions and disordered thinking. They cycle in and out of hospitals and jails.”

The new directive would give the city’s mobile crisis teams, police, firefighters and other emergency response teams a “step by step” process to evaluate and take those showing mental health symptoms to area hospitals for evaluation. Adams said these workers will “receive enhanced training on how to assist those in mental health crisis” in order to make those determinations and “compassionately care for those in crisis.”

The move was criticized by some mental health professionals who said the city should focus on long-term solutions and avoid treating people who refuse.

“My most striking concern is this plan relies too much on coercion and the involuntary use of hospitals, and adding coercion to a failed system that is inadequate to begin with doesn’t really address the fundamental issues of engagement and access to quality care,” said Harvey Rosenthal, chief executive officer of the New York Association of Psychiatric Rehabilitation Services.

“The Mayor is playing fast and loose with the legal rights of New Yorkers and is not dedicating the resources necessary to address the mental health crises that affect our communities,” Lieberman said in a statement. “The federal and state constitutions impose strict limits on the government’s ability to detain people experiencing mental illness — limits that the Mayor’s proposed expansion is likely to violate. Forcing people into treatment is a failed strategy for connecting people to long-term treatment and care.”

Adams said there is a “myth” surrounding “involuntary assistance” applying only in cases of imminent harm and that the city will not “abandon efforts” for hospitalizations even if it is against an individual’s will. The mayor invoked the full power of “Kendra’s Law,” New York’s legislation that allows court-ordered assisted outpatient treatment. The law is named after Kendra Webdale, who died after she was pushed onto subway tracks by a man with a history of mental illness.

The city conceded that the legal landscape for this kind of authority may be murky, saying in the directive that “case law does not provide extensive guidance regarding removals for mental health evaluations based on short interactions in the field.”

The plan comes as part of a larger 11-point legislative agenda Adams hopes to push through the state Legislature. Some of the points include updating the state’s legal standard for involuntary hospitalization, which Adams believes is too narrow; mandating coordination between inpatient and outpatient providers of mental health after someone is released from inpatient court-ordered mental-health treatment; and requiring hospitals to share treatment records with city health officials conducting court-ordered outpatient care investigation, but only after the patient has been afforded a reasonable opportunity to challenge the disclosure in court.

The mayor’s plan also comes as New York City continues to contend with crime on public transit. Several people were stabbed in the subways this year and Michelle Go, a 40-year-old woman, died after she was shoved in front of a subway car.

The incidents led Adams and New York Gov. Kathy Hochul in February to announce a new safety plan to address public safety concerns and support people experiencing homelessness and serious mental illness on the city’s subways. It also was intended to crack down on people sleeping in the train platforms, exhibiting aggressive behavior to passengers or creating an “unsanitary environment” in the subway system.

Rosenthal said that while the mayor does hint at some good policies, his overall approach misses the mark because it prioritizes hospital stays — a short term solution — over investment in long-term solutions.

Instead, he said, the city needs sustained engagement, housing, health care support and financial assistance for those in need.

“We have approaches that already engage populations like this, we’re not investing in them, we’re falling into ‘the answer is coercion.’”

Adams noted that the availability of beds and the hospital infrastructure would need to be bolstered to be ready for his plan and that Gov. Hochul had agreed to add 50 new psychiatric beds in an effort to open up space.

The addition of 50 beds, however, would not be enough if hospitals require longer stays as Adams’ plan proposes, said Taina Laing, chief executive of Baltic Street AEH, Inc, a peer-led mental health organization based in Brooklyn.

“He’s looking for longer term hospital stays until the person has stabilized, but hospitals do not have the capacity for that kind of long-term stay in a forced setting,” Laing said.

Laing also noted that police officers have had a fraught relationship with residents, particularly those who suffer with mental illness.

“We’re living in a society right now where they just do not trust the police, so if a person is in crisis, they don’t want to see a police officer,” she said. “They would rather see a peer specialist or behavioral health specialist.”

“Involuntary commitments have existed for a long time and that is how many patients, unfortunately, have been going to hospitals for years so we need to be mindful of how this might perpetuate further stigma and hesitancy in seeking treatment,” said Dr. Sue Varma, a board-certified psychiatrist in New York City.

“In an ideal situation, you want mental health crisis teams to be the front line. If we want to invite people to seek treatment voluntarily, we need to know what that invitation looks like,” she said.

“At the end of the day, the decision to hospitalize should ultimately be made by the patient and their treatment team. The goal is always to keep a person in the community, stable and healthy for as long as possible.”

Varma said the mayor’s plan is moving the conversation in a direction that expands services but at the same time begs the question of how to keep people healthy long term so that they can remain active participants in their own treatment.

Dr. Victor Schwartz, senior associate dean at the the City University of New York School of Medicine, said it’s better for police to bring people to an emergency room “where they can be both checked up medically and psychiatrically rather than bringing them to the criminal justice system in a jail system where there is some medical care, but way less than in a hospital setting.”

Schwartz said he sees people with mental health problems often going through the criminal justice system, so while this directive would reroute one aspect, the plan is merely a “stopgap maneuver.”

“It’s unfortunate to have to use acute care hospitals for people who in many cases probably would do better in other kinds of supportive settings but, unfortunately, we’re in this crisis because other kinds of services have been underfunded.”

Schwartz believes the ideal solution would include an array of supports in communities from supportive housing to case managers to capacity to make sure people are compliant with treatment as well as access to psychosocial support.

“I think there’s the sense of pressure to take a dramatic action or stand, change the dial quickly, but if it’s done without attention to the broader needs of the system, then it’s really like putting a bandage on a hemorrhaging wound.”

The 2022 Midterms Show How Just Stuck We Are