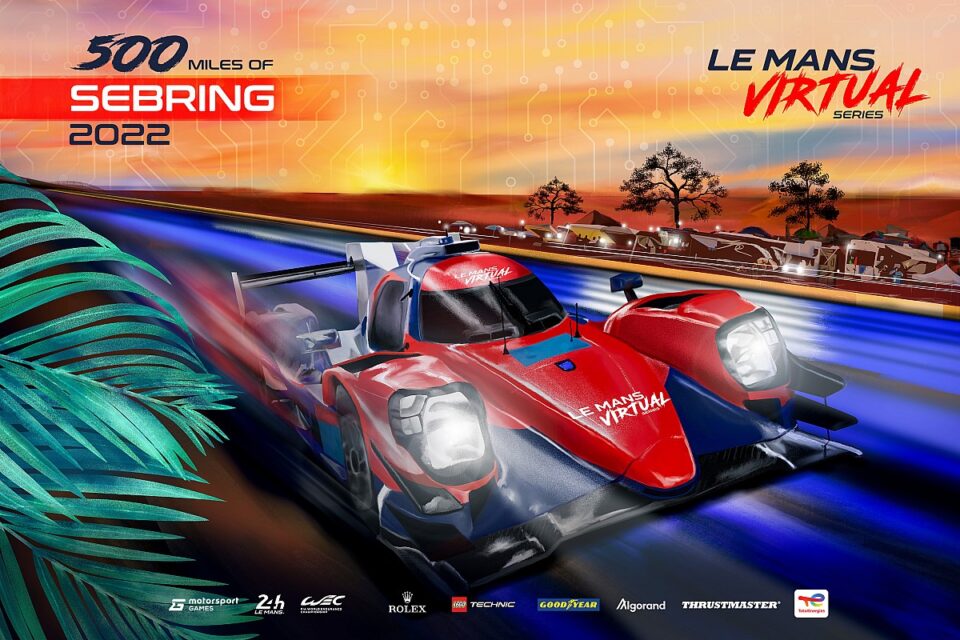 MIAMI, FL – November 29, 2022 – The entry list for the 500 Miles of Sebring, the fourth round of the 2022-23 Le Mans Virtual Series – the global, elite endurance esports series and a joint venture between Motorsport Games Inc. (NASDAQ: MSGM) (“Motorsport Games”) and the Automobile Club de l’Ouest (“ACO”) – has today been revealed. With a full field of 40 cars, the complete roster for the 500 Mile-event (approximately 4 hours) can be found HERE.  The race will take place on Saturday, December 3, and is the final round before the legendary 24 Hours of Le Mans Virtual in January.

The list features standout names from the real world of motorsport, including Team Redline’s two-time Formula One World Champion Max Verstappen, former F1 and current INDYCAR star Romain Grosjean, and W Series and sportscar racing’s Beitske Visser for Mahle Racing Team, plus many more representing the most prestigious automotive manufacturers in the world. They are joined by elite esports squads from around the globe and gaming stars such as Jeffrey Rietveld (Team Redline), Josh Rogers and Tommy Østgaard from Porsche Coanda Esports, and Lorenzo Arisi from Ferrari’s SIM Maranello entry.

Many teams are taking the opportunity to field pro drivers who will use the 500 Miles of Sebring as a prologue for Le Mans, giving them an opportunity to re-familiarise themselves with the fFactor2 platform and the increasingly competitive entrants. With just one round to go before the finale of the Le Mans Virtual Series, the prestigious 24 Hours of Le Mans Virtual (January 14-15), Team Redline leads the LMP Points classification from Floyd Vanwall Burst and BMW Team Redline heads Oracle Red Bull Racing in the GTE category’s points leader board. There is all to play for in each of the two categories, and endurance esports laurels are at stake together with the US$ 250 000 prize pool.

The race takes place on the technically tricky and virtually bumpy Sebring International Raceway, and full, uninterrupted coverage will begin at 12:30 pm (GMT / 7:30 am ET) on Saturday, December 3.  The Florida track is unmatched for its history, especially in endurance racing, and the passion it invokes in motorsport fans – real or virtual. Be sure that plenty of action will be in store!

Qualifying is on Friday, December 2, and all race action can be followed on the FIA WEC, Le Mans, and TraxionGG’s YouTube channels, on twitch.tv/traxiongg, Motorsport.tv, and multiple social media channels.

NHL On Tap: Tkachuk in Calgary with Panthers for first time since trade