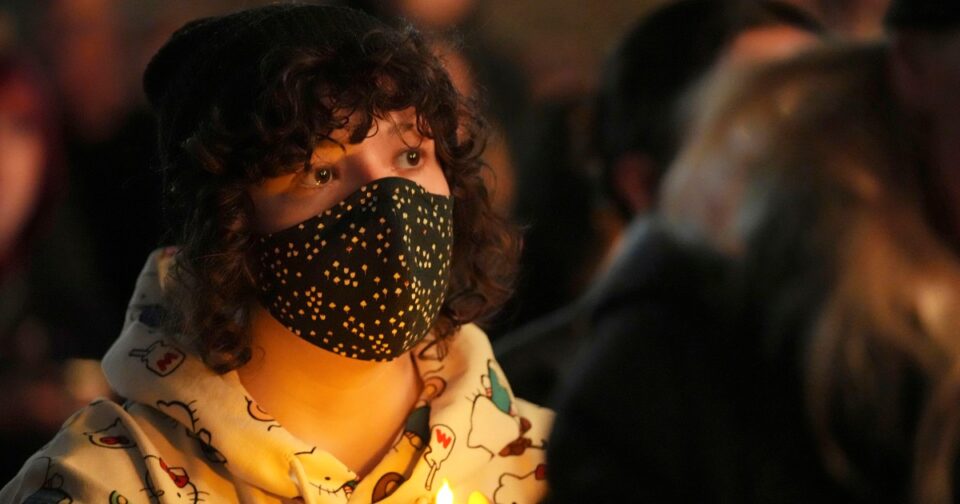 Fighting back tears, parents of slain University of Idaho students shared moments of laughter and sorrow Wednesday as students and faculty members gathered for a vigil for the four lives lost.

The four students — Ethan Chapin, Madison Mogen, Xana Kernodle and Kaylee Goncalves — were found stabbed to death in an off-campus home on Nov. 13, and no suspect or suspects have been identified.

“We’re going to get our justice. We’re going to figure this stuff out,” Steven Goncalves, Kaylee’s father, said at the ceremony at the university in Moscow, Idaho. “This community deserves that.”

“It’s hard that we are without these four beautiful kids with us tonight,” said Stacy Chapin, Ethan’s mother.

Near the end of the vigil, the lights darkened and the crowd held up their phones showing candles or turned on their flashlights as they observed a moment of silence.

The unsolved killings have put some students at the university, in a city of around 25,000, and the community on edge. Police say the coroner determined that the four victims were most likely asleep when they were killed but that some had defensive wounds.

Madison Mogen’s father, Ben Mogen, said he talked about his daughter, an only child, to anyone he met. “The first thing I’d say is: ‘I have this daughter, and here’s a picture of her. She’s on the dean’s list at college,’” Mogen said.

Mogen recalled that his daughter, who like him loved live music, was upset that musician Mac Miller was coming to the area — but the tickets were sold out. He entered every radio station contest he could.

“And, like, the night before it happened, I won four tickets and got to bring her and her friends, and they were meet-and-greet tickets. We got to go and meet him after the show,” Mogen said. “That was the happiest memory I could think of, that we shared together, was that.”

Ethan Chapin, a triplet, loved country music and was close to his siblings — they even all got their wisdom teeth taken out together, his mother said.

“We are eternally grateful that we spent so much time with him,” Stacy Chapin said. She urged the audience to make time for their loved ones, saying, “Time is precious, and it’s something you can’t get back.”

Goncalves said his daughter, Kaylee, and Mogen’s daughter had been best friends since the sixth grade.

“Then they went to high school together, then they started looking at colleges, they came here together. They eventually get into the same apartment together,” Goncalves said. “And in the end, they died together.”

Goncalves said they were in the same bed, which is a comfort that “they were with their best friends in the whole world.”

The family of Kernodle, who was a junior in marketing from Post Falls, was not able to attend the vigil, Dean of Students Blaine Eckles said. Her family is planning a service for her Friday, he said.

The FBI and Idaho State Police are assisting Moscow police in the investigation. The two agencies have more than 40 investigators combined in the city, and the FBI has agents elsewhere also helping, Moscow police said.

Aaron Snell with the Idaho State Police, who is the acting spokesperson for the incident, said that it is a “24/7” investigation.

“There are guys that have been working just day in and day out,” he said. “And we will continue working on this case until it’s solved.”

Mogen said he was grateful that Madison had been in her first big relationship, to a “great guy” named Jake, and “she got to just have at least a little taste of what it’s like to be in love with someone.”

“Maybe someday, maybe they would have gotten married,” he said. “It seemed like it, at least.”

Goncalves urged the people at the vigil to take time to be kinder to one another and to tell someone they are loved.