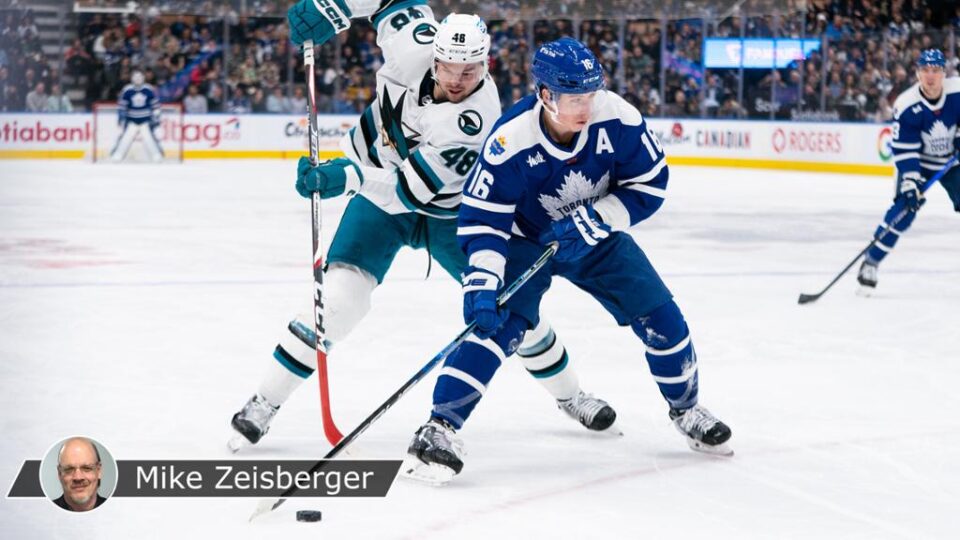 TORONTO — Mitchell Marner was damp. His spirits, however, were not.

The Toronto Maple Leafs forward had just scored into an empty net at 18:49 of the third period in a 3-1 victory against the San Jose Sharks on Wednesday. The goal extended his point streak to 18 games, tying the longest in Maple Leafs history with Darryl Sittler (1977-78) and Eddie Olczyk (1989-90).

Marner’s reward was a wet one, thanks to the frenzied water shower he received from his teammates when he walked into the dressing room after completing a postgame television interview.

He loved the celebration, wet as it was, much the same way he embraced the standing ovation he received from the crowd at Scotiabank Arena minutes earlier.

For the Toronto area native, who as a kid fantasized about playing for his hometown team, very few moments in life could be better than this.

“That was really special. That meant a lot,” Marner said. “I’ve got my family here, and it was a special moment. Obviously, they’re not beside me, but I’m sure they were in the crowd loving that moment, too, and just taking it in with me. It was a special moment to grow up in this city, be a huge fan of this team, and now have my name with a couple unbelievable players, it’s pretty special. That kid growing up would have never expected this, and now that it’s kind of a reality, it’s a cool moment.”

The ringleader of the celebration was Auston Matthews, who bubbled over with enthusiasm as he doused his friend with water.

Back on April 26, it was Marner who led the celebration when he and his teammates gave Matthews a similar water shower after the center became the first U.S.-born player to score 60 goals in a season in a 3-0 win against the Detroit Red Wings.

“He’s my brother and means a lot to me,” Marner said. “Cool to see his excitement for me as well.

“Yeah man, it was great. That water shower is a great time. It’s a fun thing to be a part of for our team to do that. We’ve had some great moments in the past year and a half with those. It was cool to be part of that and be in the middle of that for once.”

Of course, it almost didn’t happen. Any of it.

With the Sharks down 2-1 and goaltender Aaron Dell pulled for an extra skater, Marner had two chances to extend his streak before he finally succeeded.

On the first, he passed up a shot at the empty net in an attempt to set up Michael Bunting, but the pass was broken up.

“Big Mike on the bench kind of looked at me and couldn’t believe I tried to pass it to him,” Marner said. “He was kind of [ticked] at me, to be honest.”

On his second attempt, Marner did take the shot in the neutral zone, but he missed the net.

Luckily, though, the third time was the charm.

“It was pretty ugly there to get it done,” Marner said. “But like I’ve been saying, I love these guys. Every time they got it, they were looking for me for the empty net. Quite ugly attempts for the first two.”

Video: Marner extends streak to 18 in a 3-1 win over Sharks

For their parts, Sittler and Olczyk couldn’t have been happier for Marner.

Sittler watched the game with his son, Ryan, and Jack Valiquette, his former teammate with Toronto.

“He deserves it. He’s such a skilled player, and he cares about this city, these fans, and this team. He does a lot for this community on and off the ice. He’s such a great kid.

“Hey, when I was playing, records weren’t monitored the same way. A reporter might add up some numbers from the game notes, then tell you you’d done something special. There was nowhere near the hype like Mitch had.”

In London, Ontario, which is about two hours southwest of Toronto, Mark Hunter could not have been more pleased either.

It was Hunter, then the general manager of the London Knights of the Ontario Hockey League, who selected Marner with the 19th pick in the 2013 OHL Draft.

Two years later, Hunter helped convince the Maple Leafs to select Marner with the No. 4 pick in the 2015 NHL Draft as their director of player personnel.

“I’m happy for him,” Hunter said. “I don’t really think he gets enough credit for the skilled player he is, and, more importantly, how hard he works. He deserves this.

“The Maple Leafs mean everything to him. They always have. It’s an amazing accomplishment he’s achieved, but knowing the kid and his work ethic, I can’t say I’m surprised.”

Neither is Olczyk, who was part of TNT’s broadcast team for the game between the Edmonton Oilers and Chicago Blackhawks at United Center on Wednesday.

“Really happy for him,” Olczyk said from Chicago. “Of course I have a soft spot for him because he wears No. 16 for the Leafs just like I did.

That opportunity will come Saturday, when the Maple Leafs visit the Tampa Bay Lightning at Amalie Arena. And should he register a point in that one, another water shower will surely be waiting for him.