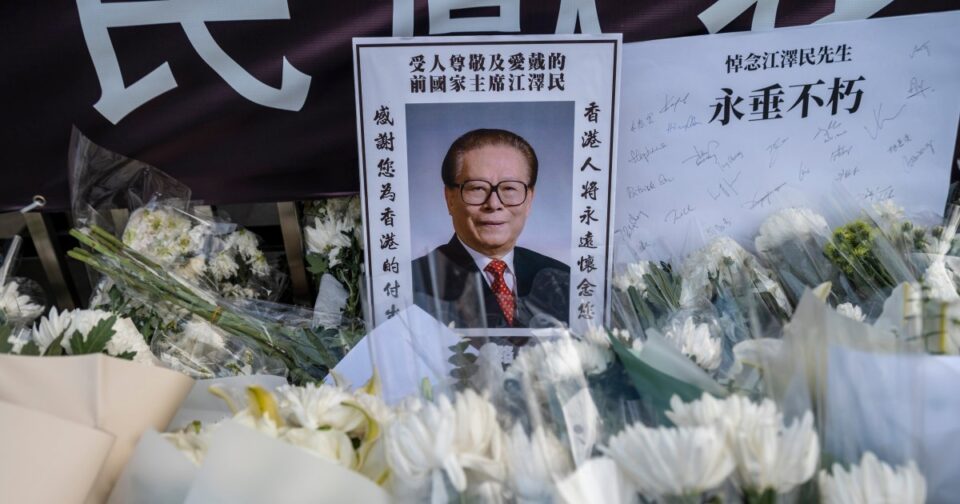 Xi emphasized Jiang’s role in maintaining political stability in allusion to his sudden elevation to top leader just ahead of the army’s bloody suppression of the 1989 student-led pro-democracy movement centered on Beijing’s Tiananmen Square.

“Comrade Jiang Zemin emphasized that our party is leading the people in a great struggle to build socialist modernization, and inevitably will encounter many complex situations,” Xi said.

“The severe situation at home and abroad and the confrontation and struggle between different social systems and different ideological systems often test every member of our party,” he said.

Jiang died at age 96, just days after China’s largest street protests since 1989, which were driven by anger over draconian Covid-19 restrictions. Acting to quell the protests, authorities flooded the streets with security personnel and an unknown number of people have been detained.

Those attending Tuesday’s memorial observed three minutes of silence and trading was paused on the country’s stock exchanges.

On Monday, state broadcaster CCTV showed Xi, his predecessor Hu Jintao and others bowing before Jiang’s body laid out in a bed of flowers and evergreens and covered in a party flag at a military hospital in Beijing. Jiang’s body was sent for cremation at the Babaoshan Revolutionary Cemetery, where many Chinese leaders are interred.

Crowds stood silently as Jiang’s glass-topped coffin was driven slowly to the cemetery amid high security, possibly as a safeguard against a recurrence of recent protests.

Jiang led China out of diplomatic isolation over the 1989 crackdown and supported economic reforms that spurred a decade of explosive growth. The economy has slowed as it matures and confronts an aging population, trade sanctions, high unemployment and the fallout from lockdowns and other anti-Covid-19 restrictions imposed by Xi.

A trained engineer and former head of China’s largest city, Shanghai, Jiang was president for a decade, and led the ruling Communist Party for 13 years until 2002. After taking over from reformist leader Deng Xiaoping, he oversaw the handover of Hong Kong from British rule in 1997 and Beijing’s entry into the World Trade Organization in 2001.

Hu’s appearance was his first in public since Oct. 22, when he was unexpectedly guided off the stage during the closing ceremony of the national congress of the Communist Party.

No official explanation was given, and speculation over his abrupt departure has ranged from a health crisis to a signal of protest by the 79-year-old former leader against Xi, who has eliminated term limits on his position and appointed loyalists to all top positions.

The Hong Kong Stock Exchange did not halt trading, but its external screens at Exchange Square downtown stopped showing data for three minutes. The Chinese Gold and Silver Exchange, also in Hong Kong, suspended trading briefly to mark the occasion.

An official memorial for Jiang drew large crowds over the weekend, mostly older Hong Kongers who credit him with overseeing a smooth transition from British to Chinese rule. The handover was made with a pledge by China that Hong Kong would maintain its own social, economic and legal systems for 50 years.

A sweeping crackdown on freedom of speech and assembly, electoral reforms that effectively eliminated the political opposition and the imposition of a draconian national security law under Xi have drained most of the substance from the “one country, two systems” framework as promised under Jiang.