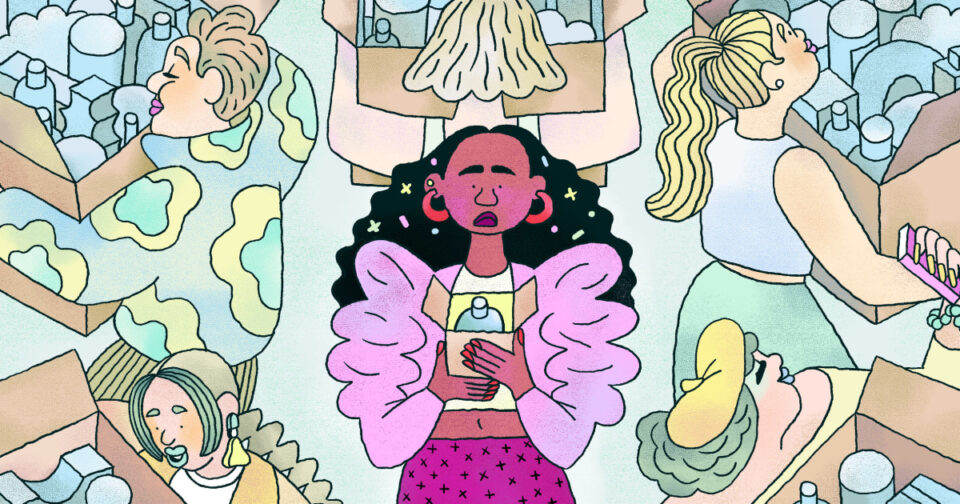 As influencers who were new to New York City, Antoni Bumba and her former roommate spent time last year trying to strengthen their relationships with brands.

The creators, who had already built sizable followings on their platforms, knew that one of the best ways to grow their careers was to ask brands for “PR packages,” or gifts, to create promotional content and foster brand relationships. One day, Bumba said, the two of them decided to send emails to the same company.

Bumba’s friend, who is white and had fewer followers, was sent gifts from the brand shortly after. Bumba, who is Black, did not receive anything at the time. Instead, she said, she was told the brand was at capacity for “gifting.” It was one of several instances in which, Bumba said, she has tried to get on a brand’s public relations list with little to no success.

“As far as it goes for those free ops, you gotta know people, and you gotta know [white] people,” said Bumba, a lifestyle creator with 938,000 TikTok followers.

Black creators, like Bumba, have been vocal about how the lack of gifting to creators of color demonstrates the inequity in influencer marketing. The problem, which is not new, has become the subject of many TikTok videos in recent months, with Black TikTok creators sharing their experiences, or lack thereof, with PR lists and gifting. Many of them have called on brands to do better.

Black creators said that without access to gifting, they have to spend their own money if they want to use certain products, which takes away from their take-home income. That can contribute to widening the existing pay gap between Black and white influencers, which is 35%, according to a 2021 study from MSL, a global public relations firm that offers influencer marketing services. Black creators say they still feel they have to work twice as hard as their white counterparts.

Much of the recent conversation around influencer gifting stemmed from videos in which lifestyle creator Victoria Paris, who is white, talks about how she gets “good” PR — such as clothes and furniture — in part because she is white and privileged. In one video, Paris says people in charge of brands’ PR lists are often white and hold implicit bias, leading them to gravitate toward influencers who look like them.

People at brands “don’t understand that, like, when you give to people who look just like you, you’re leaving out a lot of people who don’t look like you or you’re creating … a disadvantage,” Paris said in an interview.

While PR packages may appear to be just free items given to lucky creators, influencers said PR is an essential resource they can use to create more content.

In a stitched response to Paris’ video, Black beauty creator Darius Hall (whose username is poorlildarkbxy) claimed he accumulated debt because he has had to buy a lot of products to keep up with the demands of content creation. Hall, who uses he and they pronouns, said he pays for most of the products he uses in videos and rarely receive PR packages.

“People don’t realize that getting PR is a very essential tool, especially within this industry,” said Hall, who has 209,000 followers on TikTok. “Some of the products that people want me to review or want me to talk about, it’s a little expensive, and sometimes I ain’t got the coins for that.”

To do so, most influencers buy from brands they like, create videos with their products and hope the brands notice. When their videos get brand attention, influencers can build relationships with companies, which can lead to getting PR packages and brand deals.

Hall said he’s been unable to pivot to content creation full-time because the money is inconsistent. Hall believes getting more PR gifts could help him become more self-sufficient in content creation and therefore able to generate more income.

Nimay Ndolo, a Black comedy creator with 1.9 million TikTok followers, said Black creators are often excluded from such opportunities, which limits their success.

“We have to be perfect before brands will even touch us,” said Ndolo, who uses she and they pronouns. “And it sucks, because, like, you know, perfection is so hard to attain, and why are we forced to reach perfection when white influencers can just do whatever?”

Based on her observations, Bumba said influencers who are cisgender, white women “between a size double-zero to a size 10” receive a lot of gifts. A lot of her nonwhite friends who get “good” PR packages have millions of followers, she said, but they are not typically full-time creators. They are actors or celebrities who have found fame outside the internet.

Meanwhile, she said, marginalized creators, who are known primarily for their online content, are not granted the same access.

Everything that they say, on paper, that you need to have to be able to work with them? I have it. So what makes me a risk, you know? It sucks.”

Bumba has cultivated relationships with brands she cares about, and she acknowledged that she is privileged to receive gifts from them.

While she is grateful for those connections, she estimated that she still gets one-fifth of the PR packages some of her other friends get.

Bumba also said that compared to her white counterparts, she and other Black creators have to put more effort and strategy into how they present themselves online to persuade brands to work with them.

“Sometimes you can see [white influencers] … be more free-flowy and just be, like, messy hair and, like, big college T-shirts and … still get these, like, $60,000 to $100,000 gifting partnerships,” she said. “And then you’ll have, you know, girls like me … who have to always be in a whole fit or always have to be serving some sort of a look or have some sort of a color scheme or have our face done with makeup to some extent. You know, like something to make us look a little bit more higher-end so these brands can fit us in.”

Ndolo agreed that Black creators have to “come correct” online to attract brands.

Black creators have to be “extraordinary” to get what white influencers appear to get with ease, Ndolo said.

“It’s really disheartening, because, you know, I feel like a lot of people hear Black influencers, Black people, cry about these injustices, and they write it off, like, ‘They’re always just complaining about something,’” Ndolo said. “Like, are we even being heard? And it really doesn’t feel like we’re being heard, because so many Black influencers talk about this.”

Ndolo added that it is discouraging to get rejected by brands, because she often has the audience companies want to reach.

Bumba said she thinks some brands view partnerships with Black influencers as a risk.

“In their heads, they have an ideal clientele who’s willing to pay X amount of money to get these products, and in their ideology, you know, economically, this range of people who look [white] make the money to be able to afford this clothing,” she said.

MSL U.S. reported in 2021 that Black consumers account for $1.6 trillion of purchases annually. The report also said 48% of consumers consider brands’ commitment to racial justice a deciding factor in their decisions to purchase products.

Optimism about ‘more opportunities’ in 2023

Gifting is just one part of the greater issue of racial inequality in the influencer space. Black creators have pointed out unfair contracts, pay disparity and algorithmic bias for years. Brands and platforms have promised to help combat inequality since 2020, but progress has been slow.

“I think the vast racial divide that exists in the [influencer] space is unequaled compared to any other industry,” said Shreya Mukherjee, the chief strategy officer at MSL U.S. “This is a serious problem for the marketing comms industry overall.”

The path toward improving the industry will require a two-pronged education plan for both marketing professionals and influencers, Mukherjee said.

Organizations like the Influencer League, an influencer education group which partnered with MSL in its racial inequality study, help support creators of color by advising them on brand relationships and providing information that can help them build their businesses.

Meanwhile, on the marketing side, Mukherjee said, the industry needs to have “uncomfortable conversations” and work toward diverse representation in positions of power. When executives and brand representatives are more diverse, the effect trickles down to the influencers who are given access to resources.

While Mukherjee’s company is taking steps to address inequity in the influencer space, she said there is still a lot of work to be done.

“I think moving from conversation to advocacy to action is something we’re literally in the process of doing,” she said. “And our hope is we can hold hands with the industry and, you know, sort of broaden that.”

While creators say there has been little movement from brands to address gifting inequality, some have noticed a few brands stepping up to the plate and responding directly to marginalized creators’ criticisms.

Paris, Ndolo and Hall called out the makeup brand Urban Decay as an example of a company that has listened to Black creators.

Urban Decay has several videos on its TikTok page directly responding to Black creators who have called out gifting inequality, including videos from Hall and Ndolo.

In response to Ndolo’s video, Urban Decay announced that it would crowdsource suggestions for influencers to add to its PR list for its next product launch. Viewers praised the move, enthusiastically tagging their favorite creators of color in the comments section of Urban Decay’s TikTok account.

“Our Urban Decay social team humbly listens to the continued conversation around a need for increased inclusivity. I’m proud that our creator partners have taken note of UD’s continued efforts to bring action to this dialogue — not just because it’s so needed, but because it’s part of who we are as a brand,” said Malena Higuera, Urban Decay Cosmetics’ U.S. general manager. “In fact, our team recently expanded our PR database upwards of 1,000+ names featuring influencers and consumers alike who have voiced that they, unfortunately, don’t feel seen online.”

Bumba is encouraged by the recent conversation around gifting. She said she thinks it has helped brands better understand the exclusion they perpetuate.

1 dead, 1 rescued in a Colorado avalanche triggered by a snowboarder