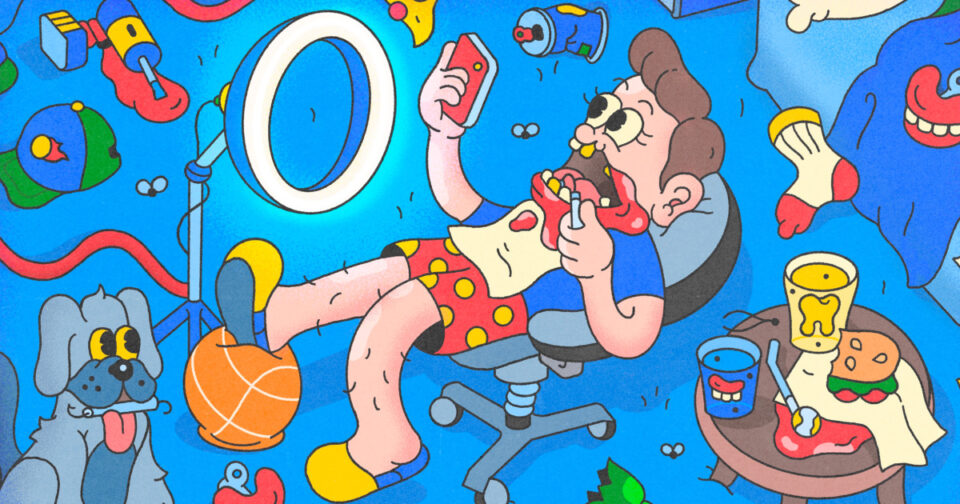 Growing up, Skylar Geiger said that other kids called her “SpongeBob” because of the gaps between her teeth.

“In real life and in social media I have been told that I was gorgeous until I smiled,” Geiger, who has 28,500 followers, said. She “hated” her smile because she frequently compared it to what she saw online.

Although her teeth have always been “very healthy,” they didn’t look like the perfectly aligned pearly whites that she desperately wanted. Since she didn’t have dental insurance and couldn’t afford the out-of-pocket expense, she turned to YouTube to change her teeth. Ahead of her 19th birthday in 2020, she bought dental cement, which is typically used for filling cavities, and applied the material to her teeth using the back of an earring. She documented the process on TikTok, joining hundreds of other viral dental “hacks” on the platform. Her video has over 2 million views.

Geiger’s DIY attempt is not uncommon — although she said she didn’t permanently damage her teeth, others haven’t been so lucky. Dental DIY content has become so pervasive on TikTok in recent years that it has begotten a generation of dentist-influencers who built followings by reacting to botched dental care. The tag #DIYdentist has over 3 million views on the app.

The polished nature of social media can amplify viewers’ insecurities, especially if they don’t have access to affordable dental care. TikTok and YouTube are brimming with tutorials that promise the perfect smile, without the exorbitant cost of visiting a dentist without insurance. Many licensed dentists, orthodontists and oral surgeons, however, have expressed concern over the popularity of dental DIY content. Tutorials for unsafe bodily alterations abound online, and those involving teeth can result in permanent damage. Dental enamel doesn’t regenerate, so attempts to meet an already unattainable beauty standard can have lifelong consequences.

Dental DIY content is especially popular on TikTok. Many videos are relatively innocuous, like at-home teeth whitening “hacks” that are mild enough for people with sensitive teeth. Creators with technical backgrounds have posted about making their own dental gear, from an artist who made her own night guards to a creator who 3D-printed his own Invisalign. Other DIY practices that have gone viral include shaving down teeth with a nail file to make them appear straighter, wrapping office supply rubber bands around teeth to close gaps and removing braces at home with a spoon.

Tutorials for composite veneers, which use resin to cover and change the shape of teeth, are also popular. TikTok users have posted about taking two-day courses to learn how to apply veneers, without any other formal dental schooling.

Dr. Ben Winters, an orthodontist known on TikTok and YouTube as The Bentist, said that his educational videos reacting to dental DIY content have been an “absolute hit.”

Not all dental DIY content is harmful, Winters said. Cosplayers who use denture wax to make vampire-like fangs, for example, or people who get temporary tooth gems probably won’t have long-term side effects.

“Most of that stuff is pretty harmless,” Winters said. “If you start using dental-grade materials and try to do what the dentist does, then you start doing permanent changes to your teeth that you can’t just pop off.”

But many dental DIY videos can result in serious damage. Tips for shaving down teeth to make them appear straighter or more proportionate resurface on YouTube and TikTok often, and few warn viewers of the pain and lasting dental issues that can arise.

In response to a video of someone using a nail file to pare down their teeth, one TikTok user said that when she attempted to do the same, she had such bad pain that she had to take painkillers “every two hours.” She ended up going to her dentist anyway.

“As embarrassing as it was, I just had to tell her what I did. And she said to me, ‘You’re an absolute idiot. You’ve obviously filed into your nerve,’” the TikTok user said in the video. “I was gonna need a root canal. It was two procedures. I’ve had to go in twice.”

Teeth are organs with their own blood supplies and delicate nerve structures, which “people don’t understand,” Winters said. By whittling away the hard, protective enamel that covers the surface of a tooth, “you’re basically giving yourself a deadline for how long that tooth can last.”

Though research into treatments like synthetic enamel and repairing teeth using stem cells is promising, natural enamel will not grow back on its own.

That’s why Winters is so concerned that young people are getting significant cosmetic work done on their teeth. It’s not comparable to many other cosmetic procedures, he said, which are reversible or affect body parts that can be repaired.

“This is a permanent decision. These teeth are not coming back, you’re not getting anything else,” Winters said. “Lip filler can be dissolved. Botox goes away. If you get implants, you can have them removed. Once you alter the shape of your teeth, that is gone forever.”

Before applying veneers, cosmetic dentists typically prep teeth by lightly shaving the top layer of enamel. They’re trained to preserve as much of the enamel as possible, according to Dr. Desiree Yazdan, a dentist who specializes in restorative and cosmetic care.

People who do it themselves, or turn to amateurs who run veneer businesses out of their homes might not have the same conservative approach.

Some who said they’ve gotten veneers from unlicensed amateurs have complained of their veneers falling off and developing bad breath — which one dentist on TikTok said could be caused by teeth decaying under the veneer.

“And they basically whittle the tooth down to a nub all the way across and pop some glue on it, and they don’t realize they just ruined one of the most important things in their body, which is their teeth,” Winters said. “A lot of people don’t understand how important having teeth for your life is until they lost them all … if the shape of your teeth are good, and they’re just a little crooked, just go get them fixed from an orthodontist.”

“Nobody would ever be like, ‘I’m going to buy a home nose job kit, and I’m gonna get this scalpel and watch this YouTube video about how to slice my nose open.'”

Yazdan, who also posts educational content on TikTok, said that although patients might want veneers for the cosmetic appeal, they’re not for everyone. Patients who are candidates for veneers may have certain conditions that drastically affect the shape of their teeth, or have naturally darker teeth that haven’t responded to whitening treatments. Some may want to cover a chipped tooth. But Yazdan said she’s had patients as young as 18 ask her for veneers, despite already having “gorgeous healthy teeth.”

“They’re so pretty. It’s just sad because they think that they’re not good enough,” Yazdan said. “I think the pressure to look perfect and have the perfect smile is really there.”

“Nobody would ever be like, ‘I’m going to buy a home nose job kit, and I’m gonna get this scalpel and watch this YouTube video about how to slice my nose open,” Yazdan said.

Musician Brandon Andre said his appearance was crucial for career opportunities. Six years ago, he wrapped rubber bands around his two front teeth every day for six weeks to close the gap between them. He said that cost wasn’t a factor. He just didn’t want to wait for Invisalign or braces because his teeth were “already straight.” It appeared to work, Andre, now 30, said.

“I closed my gap so I can gain pretty privilege,” Andre said in an Instagram message. “When you have pretty privilege, what industry wouldn’t a person have success in? And having the perfect smile not only made me pretty but it made me sing better.”

Andre added that he can better control his breath without air escaping through the gap in his teeth. He now has a permanent retainer to keep his teeth from separating.

“My dentist yelled at me when I told him what I did and refused to install the permanent retainer,” Andre said. He ended up going to a different dentist, who he claims was “amused” by the DIY. In a TikTok video, he said that the retainer cost $350, which is still less than what he would have paid for braces.

Yazdan noted that attempting to do dental work yourself might save some money upfront, but you’ll likely pay more for treating any problems that arise from DIY attempts. Even if attempts like Andre’s appear successful, it could still cause unseen damage.

“It’s just so dangerous because they don’t actually know what they’re doing. They might see a surface level of teeth being moved, but they don’t see what’s happening underneath the gums and the bone and the roots of the teeth,” Yazdan said. Attempting to move teeth without training can result in shortened roots, loose teeth and gum disease.

Dental care is still out of reach for many Americans. A 2022 survey conducted by the CareQuest Institute for Oral Health, a health care nonprofit, found that 77 million Americans do not have dental insurance. The Centers for Disease Control and Prevention reported that under 63% of Americans over 18 visited the dentist between 2019 and 2020, a decline from nearly 66% the previous year.

Winters said that many orthodontists offer payment plans to spread out the cost of braces and other orthodontic treatments. Yazdan pointed out that dental schools usually offer care at a discount, and procedures are always supervised by university faculty. Both options may be more expensive than a viral dental hack, but there’s less potential for ruining otherwise healthy teeth.

Geiger hasn’t attempted to change her teeth again. After she posted her videos, dentists in her comments warned her that she risked tooth decay and gum issues by covering the gaps between her teeth. When the dental cement fell off after about a year, she tried to wear a flipper — a partial denture — but it was too painful for everyday use. She’s made more of an effort to work through her insecurities rather than alter her appearance.

“Now I’m just trying to accept my own smile until I have control over it,” Geiger said. “If my friends and family and ex-boyfriends were able to look past it as a nonissue, why should I be able to do the same?”