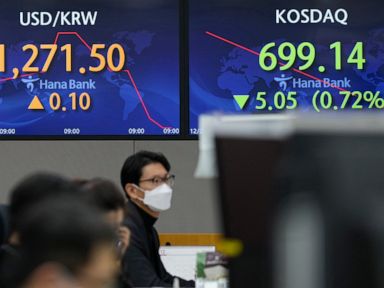 BANGKOK — A broad slide for stocks added to Wall Street’s recent losses Wednesday, as investors count down to the end of the worst year for the S&P 500 since 2008.

The S&P 500 fell 1.2%, with technology, energy and industrial stocks among the biggest weights on the benchmark index. The tech-heavy Nasdaq composite slid 1.4%. Both indexes came into this week with three straight weekly losses.

With two more days of trading left in 2022, the S&P 500 is headed for a roughly 20% drop for the year, even as profits and margins for companies in the index have hit record heights this year. The Dow is on pace for a 9.5% drop, while the Nasdaq is doing much worse, on pace to plunge 34.7%.

The latest losses don’t bode well for investors hoping for another “Santa Claus” rally. That’s Wall Street’s term for when stocks rise in the last five trading days of December and first two of January.

“The proverbial ‘Santa Claus’ rally, which since 1950 has statistically returned approximately 1.3-1.8% nearly 80% of the time, has looked as though Santa has taken an early vacation,” said Quincy Krosby, chief global strategist for LPL Financial.

Investors are in the middle of a mostly quiet and holiday-shortened week. Markets were closed on Monday for the observed Christmas holiday and there are no major economic reports expected this week.

A report from the National Association of Realtors showed that the housing market continued cooling amid high prices and steeper interest. Pending home sales fell 4% in November.

Southwest Airlines slid 5.2% as the carrier grappled with the fallout after cancelling thousands of flight cancellations. The airline’s CEO said it could be next week before the flight schedule returns to normal. Shares in other airlines also fell. Delta Air Lines dropped 2.8% and United Airlines fell 2.4%.

Tesla rose 3.3% as it stabilized from steep losses it suffered after reports Tuesday that it temporarily suspended production at a factory in Shanghai.

The Chinese government announced late Tuesday that it will start issuing new passports, a major step away from anti-virus travel barriers that likely will bring a flood of tourists out of China for next month’s Lunar New Year holiday. China has already said it will drop most of its COVID-19 travel restrictions next month.

Wall Street remains on edge and will likely continue dealing with volatile trading as the Federal Reserve continues its fight against stubbornly hot inflation. The Fed and other central banks have been raising interest rates to stifle borrowing and slow spending in order to tame inflation. The strategy, though, risks slowing the economy too much and bringing on a recession.

The Fed has already raised its key interest rate seven times this year and is expected to continue raising rates in 2023. The key lending rate, the federal funds rate, stands at a range of 4.25% to 4.5%, and Fed policymakers forecast that the rate will reach a range of 5% to 5.25% by the end of 2023. Their forecast doesn’t call for a rate cut before 2024.

Elaine Kurtenbach contributed to this report.