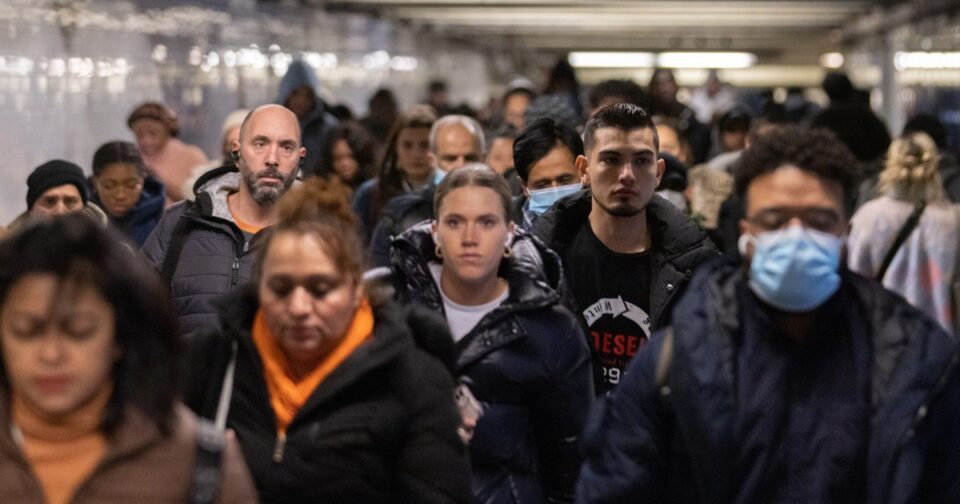 A new version of omicron has taken hold in the U.S., according to the most recent data from the Centers for Disease Control and Prevention. The subvariant of omicron, named XBB.1.5, has raised concerns about another potential wave of Covid cases following the busy holiday travel season.

The CDC projected Friday that about 40% of confirmed U.S. Covid cases are caused by the XBB.1.5 strain, up from 20% a week ago. In the Northeast, about 75% of confirmed cases are reported to be XBB.1.5.

It’s not clear yet where this version of omicron came from, but it appears to be spreading quickly here. There’s no indication it causes more severe illness than any other omicron virus, Dr. Barbara Mahon, director of CDC’s Coronavirus and Other Respiratory Viruses Division, told NBC News.

While overall Covid hospitalizations are rising around the country, areas such as the Northeast that have seen high levels of the new variant have not experienced a disproportionate increase in hospitalizations, Mahon said.

“We’re seeing hospitalizations have been notching up overall across the country,” she said. “They don’t appear to be notching up more in the areas that have more XBB.1.5.”

There’s a lot that’s still unknown about the latest subvariant, including whether it’s more contagious than other forms of omicron, Mahon said.

Other scientists worry that XB.1.5 is even better at getting around the antibodies we’ve built up from Covid vaccines and previous infection from the many different types of omicron that have spread since last December, including the original BA.1 and the more recent  BQ.1.1 and BQ.1 subvariants.

Combined, XBB and XBB.1.5 make up 44% of cases in the U.S., crowding out other versions of omicron.

XBB has been found in at least 70 countries, according to the World Health Organization, and has caused surges of infection in some parts of Asia, including India and Singapore, in October.

Studies performed in the lab have found that XBB is capable of evading antibodies from previous Covid infections or vaccinations, meaning that being exposed to the virus would mean someone is more likely to get sick or reinfected and show symptoms.

“It’s clear that there’s immune evasive properties of XBB,” said Dr. Isaach Bogoch, an infectious disease physician and epidemiologist at the University of Toronto. “That’s been demonstrated both in laboratory studies and seen clinically in cases and hospitalizations.”

Given the high level of population immunity in the U.S. — either through infection, vaccination or both — Bogoch and others hope that, even if cases start to rise significantly, there won’t be a dramatic spike in hospitalizations or deaths as seen in previous waves.

Antibody studies don’t tell the whole story. Other parts of the immune system can protect against the virus and the Covid vaccines should remain effective at preventing severe illness and death from the virus, evidence suggests.

“We might certainly have a wave, but it’s just much less likely to be as deadly or overwhelming to a health care system compared to earlier waves before we had this degree of hybrid immunity,” said Bogoch.

Do Covid vaccines work against XBB.1.5?

For encouraging signs, Rick Bright, an American immunologist and former director of Biomedical Advanced Research and Development Authority, or BARDA, pointed to Singapore’s experience with XBB.

There was a surge of cases, but “we didn’t see the corresponding major surges in hospitalizations and deaths,” Bright said.

“We think it is because a larger population of people in Singapore have been vaccinated with latest vaccines and boosters,” he said.

That could be a problem in the U.S., unfortunately.

People age 65 and older are the most vulnerable to any form of the Covid virus. Yet, only 37.5% of that age group has received the most recent omicron booster, according to the most recent CDC data.

The most important thing experts agree is to get a booster shot with the new bivalent vaccines to bolster your immune system against the new variants.

“We aren’t in 2020, but people still do need to take this seriously and protect themselves,” said Mahon, adding that getting the bivalent booster is especially important for those over the age of 65, a high-risk group that has seen pretty low booster uptake recently.

A study published last week in the New England Journal of Medicine found that the new Covid boosters from Moderna and Pfizer-BioNTech bolstered antibody responses to many subvariants of Omicron, including the XBB variant.

While the new booster — called a bivalent because it targets the omicron strains BA.4 and BA.5 as well as the original coronavirus — is not perfect, it offers additional protection to that what was seen in the original or monovalent boosters previously available, said Mehul Suthar, an associate professor at the Emory Vaccine Center at Emory University and author of the report.

The new XBB.1.5 variant was not studied in the report, but Suthar predicts its immune evasive properties to be in a similar range as XBB. He expects the bivalent booster will bolster protection against the latest version as well.

Inflation struggles, China’s Covid: What to watch for in the economy in 2023