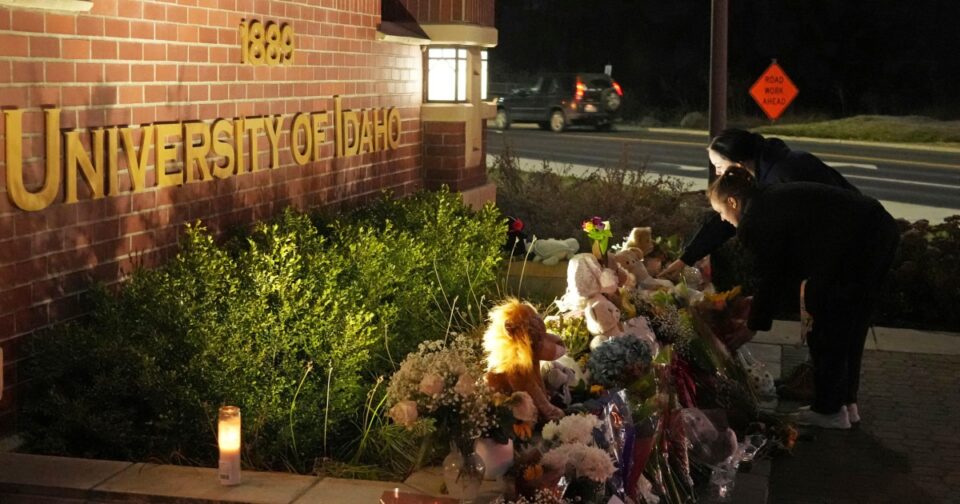 The killings of four University of Idaho students in mid-November at an off-campus residence stunned the small community of Moscow, Idaho, where investigators grappled with what the town’s police chief would later describe as a “very complex” case.

No suspect was immediately named in the deaths of housemates Madison Mogen, 21; Kaylee Goncalves, 21; and Xana Kernodle, 20; as well as Kernodle’s boyfriend, Ethan Chapin, 20. Nor was a murder weapon, believed to be a large fixed-blade knife, found.

But the intense scrutiny on the unsolved slayings sparked thousands of tips to the FBI.

Now, nearly seven weeks later — with the community on edge and speculation swirling about who could commit such violence — police announced an arrest in Pennsylvania on Friday of a doctoral student in criminal justice.

“This is not the end of this investigation,” Latah County prosecuting attorney Bill Thompson said at a news conference announcing the arrest. “In fact, this is a new beginning.”

Here’s a timeline of key moments in the case.

Starting at around 9 p.m., Kernodle and Chapin are seen at a party at Chapin’s fraternity, Sigma Chi, a short walk from the King Road apartment house where the roommates lived, according to investigators.

That night, Goncalves uploads pictures to her Instagram account featuring photos of the friends with the caption, “One lucky girl to be surrounded by these pple everyday.”

At about 10 p.m., Goncalves and Mogen go to a sports bar in Moscow, the Corner Club.

At about 1:30 a.m., Goncalves and Mogen are seen ordering from a nearby food truck, according to the truck’s livestream.

Investigators say Kernodle and Chapin return to their three-level house on King Road at about 1:45 a.m., while Goncalves and Mogen take a car home, arriving at about 1:56 a.m.

Meanwhile, two other housemates who had gone out that night had arrived home before the others, at about 1 a.m., Moscow police say.

At 11:58 a.m., a 911 call is placed on the cellphone of one of the other housemates requesting assistance for an “unconscious person.” (Both housemates were unharmed.)

Police alert the public about the deaths in a news release and while they say no one is in custody, they do “not believe there is an ongoing community risk based on information gathered during the preliminary investigation.”

With no suspect apprehended, Moscow police walk back previous comments that there was no threat to the largely rural city of almost 26,000 residents.

“We do not have a suspect at this time, and that individual is still out there,” Moscow Police Chief James Fry says at a news conference. He adds that the more than 25 investigators with the Idaho State Police and the FBI are assisting in the case.

She describes their wounds as “pretty extensive.”

Police say the victims were most likely asleep when they were slain, and some of them had defensive wounds. There was also no sign of sexual assault.

Meanwhile, detectives seize the contents of three dumpsters near the home to search for possible evidence, and they contact local businesses to determine if a knife had recently been purchased.

A vigil is held at the University of Idaho in honor of the victims, with some family members in attendance.

“We’re going to get our justice,” Steven Goncalves, Kaylee’s father, says, adding that his daughter and Mogen had been best friends since the sixth grade and learned that they were in the same bed when they were killed.

“They went to high school together, then they started looking at colleges, they came here together. They eventually get into the same apartment together,” Goncalves said. “And in the end, they died together.”

Moscow police reaffirm the quadruple homicide was part of a “targeted attack,” after authorities appeared to suggest the opposite.

“We remain consistent in our belief that this was indeed a targeted attack but have not concluded if the target was the residence or its occupants,” a police spokesperson says.

The department also continues to dispel online rumors and speculation, and says it has cleared certain people seen interacting with Goncalves and Mogen on the evening they were killed. Police also say the two housemates who were home during the attack had been sleeping that night.

The two housemates, Bethany Funke and Dylan Mortensen, release letters saying they are struggling to accept why the lives of “four beautiful people” were taken so brutally.

Detectives focus on Chapin’s and Kernodle’s activities on the evening they were killed, and ask the public for information about the nearly five hours from when the couple arrived at the Sigma Chi party to the apartment house on King Road.

Police say they recognize how frustrating the lack of news can be for the families and the public, but insist they do not want to jeopardize the case.

Police begin removing personal items of the victims from the apartment house and returning them to the families.

They also announce what appears to be an integral part of the investigation: They say they are looking to speak with any occupants of a white Hyundai Elantra from 2011-13 with unknown license plates. They do not say whether they believe the driver is linked to the killer but say that person may have “critical information” to share.

Kristi Goncalves, Kaylee’s mother, expresses frustration during an interview with NBC’s “TODAY” show that she only learned about the police interest in the Hyundai Elentra when the rest of the public did — underscoring how some victims’ families feel “left in the dark.”

Police announce an arrest of a suspect: Bryan Christopher Kohberger, 28, a resident of Pullman, Washington, and a doctoral student at Washington State University. He is apprehended in northeastern Pennsylvania, about 2,500 miles from the Idaho campus, and charged with with four counts of first-degree murder and burglary.

According to two law enforcement sources, DNA evidence played a key role in linking the killings to Kohberger.

At a news conference, Fry says he believes Kohberger is the only suspect.

“What I can tell you is that we have an individual in custody who committed these horrible crimes,” he says, “and I do believe our community is safe.”

The public defender of Monroe County, Pennsylvania, where Kohberger is being held, says he intends to waive his extradition hearing to face charges in Idaho.

“He should be presumed innocent until proven otherwise — not tried in the court of public opinion,” public defender Jason LaBar says in a statement, adding, “Mr. Kohberger is eager to be exonerated of these charges and looks forward to resolving these matters as promptly as possible.”

Making a case against Rep.-elect Santos could be harder than it seems