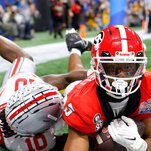 ATLANTA — The Georgia Bulldogs appeared very nearly finished, just as they had looked for much of Saturday night.

Adonai Mitchell had caught a touchdown in the final minute of the Peach Bowl, one of the College Football Playoff’s semifinal showdowns, and Georgia had a lead of one measly point over Ohio State. But here were the Buckeyes, the No. 4 seed that had slid into the playoff after a debacle of a loss to Michigan, at the line of scrimmage and preparing for a field goal to win.

The perpetual clock showed midnight Eastern time and the start of 2023. The clock that mattered more here, though, showed eight seconds, and the uprights stood 50 yards away, the kind of cruel distance that promised to leave one team a championship contender and the other an also-ran.

The snap came. Noah Ruggles swung his right leg, and then the ball swung wide to the left. The triumph of the comeback ordeal — and it was very much an ordeal for the 79,330 people inside Mercedes-Benz Stadium in Atlanta — would belong to Georgia, and Georgia alone. The Bulldogs won, 42-41, to advance to the national championship game against No. 3 Texas Christian, which toppled second-ranked Michigan in the Fiesta Bowl.

“We didn’t play our best football game — a lot of that had to do with Ohio State,” said Georgia Coach Kirby Smart, who added, “If we want any chance at winning a national championship, we have to play a lot better football than we played tonight.”

Indeed, the Bulldogs, like the Horned Frogs of T.C.U., have much to consider between now and their meeting in California on Jan. 9. Perhaps most urgently, Georgia will need to figure out where and how its vaunted defense, which entered the Peach Bowl having allowed opponents about 292 yards a game, went wrong enough to surrender 467.

Ohio State, of course, brought a formidable offense to Atlanta, with C.J. Stroud, a two-time Heisman Trophy finalist, at quarterback and a wizard of a receiver, Marvin Harrison Jr., all too ready to make any given play fodder for a hype video next season at the Horseshoe. For much of the night, that offense threatened to expel top-seeded Georgia and end its quest to become the lone back-to-back champion in playoff history.

Georgia was hardly caught unaware. Its players and coaches had preached how fearsome Ohio State could be and how the Buckeyes’ loss to Michigan was far from an indictment.

The Bulldogs, who won last season’s title as the No. 3 seed, had watched the film. They had studied the habits and tells of Coach Ryan Day’s team. They had swagger and, effectively, a home-field advantage. And it still did not take long for the Buckeyes to conjure chaos.

It did not help that Georgia missed a 47-yard field goal on its opening drive. The ball returned to the Buckeyes, and Stroud used a 24-yard pass to Harrison to move Ohio State into Georgia territory. Later, Stroud took a snap and Harrison swept — no, surged — across the field and caught a touchdown.

The Bulldogs retaliated with a touchdown by way of a quick throw from quarterback Stetson Bennett to Kenny McIntosh, but quickly found themselves down 21-7 early in the second quarter, in part because of their own miscues. Bennett, himself a Heisman finalist, had thrown an interception that helped lead to an Ohio State score, and nerves were fraying in Atlanta and Athens, in Norcross and Waycross.

Georgia fans of this particular era, after all, are not accustomed to trailing by any margin, much less a double-digit one.

Still, Georgia trailed by 4 at halftime and eventually set up for its surge with less than nine minutes left in the game.

After a hapless Ohio State drive, Bennett found Arian Smith charging alone up the field. The throw arrived as Smith’s feet reached the playoff logo at the Ohio State 25. He ran, ran and ran a little more. He could have slowed down a touch since no Buckeye defender was close enough to try a lunge to stop him.

Ruggles responded to the touchdown with a 48-yard field goal for Ohio State. Two minutes, 43 seconds to go, and Georgia, the reigning champion, was down by 6 in Atlanta.

This was not a game where many fans were leaving. (Theatrics aside, if you had paid what some of them did to get in — a mortgage payment or more — you might have been hard-pressed to leave, too, no matter the score.) The stadium, where Georgia had crushed two opponents this season, stayed awash in red, scarlet and hoarseness. The Peach Bowl, they were reasonably certain, would prove a lot better than the Peach Drop, a local New Year’s Eve celebration.

The Bulldogs navigated deep into Ohio State territory. On second and 5, the ball rested on the 10 as the largest crowd in the stadium’s history thundered as if championship ambitions depended on a single minute, which they did.

Mitchell lined up close to Georgia’s sideline and took off as Bennett bounced backward. Mitchell zipped past a defender, cutting toward the middle of the field. Bennett passed. Mitchell, now in the end zone, cut back toward his sideline. Georgia’s band loomed nearby.

He caught the touchdown. Jack Podlesny kicked the extra point for the 42-41 lead.

Ohio State had 54 seconds for its final drive. The Buckeyes reached Georgia’s 32, helped greatly by a scramble from Stroud for 27 yards.

“We had done our job, and then we trusted the defense,” Bennett said. “Then at that point, it was up to, I guess, the kicker.”

It was, in fact, up to Ohio State’s kicker.

He and Ohio State got only anguish.

With Benedict’s Death, an Unprecedented Moment for the Modern Church