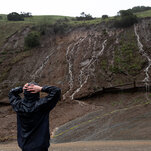 LAKE ARROWHEAD, Calif. — Heavy rain and snow caused landslides and flooding in parts of California on Saturday, shutting down two major highways as another “atmospheric river” system pounded the West Coast, but also brought a measure of relief to the drought-plagued state.

An hourslong torrent of rain forced Highway 101 to close south of San Francisco because of flooding, cutting off a major route between the city and the Silicon Valley. The storm temporarily forced the closure of Highway 50 in the Sierra Nevada, a route that connects skiers to South Lake Tahoe.

The heaviest flooding and risk of damage was in Northern California, where rain was expected to let up by Saturday evening, but some rivers and streams were already reaching flood stage levels. In Sacramento County, officials declared a local state of emergency and warned residents in one rural area to evacuate because of rising waters.

In Monterey County, further south, the local sheriff issued an evacuation warning for one region due to flooding. In San Ramon, east of San Francisco, the local police reported evacuation efforts were underway on Saturday afternoon. San Ramon police lieutenant Tami Williams said the department used armored vehicles to reach “senior citizens who needed assistance with evacuations due to flooding.” She said the department came to the aid of 13 people.

The Cosumnes River in Northern California exceeded flood stage and was expected to crest at 15.5 feet by Saturday night. Parts of the state have already had up to seven inches of rain from Friday to Saturday. Downtown San Francisco was pushing close to its record for most rainfall on a single day, with 5.33 inches of rain reported by Saturday afternoon, according to the National Weather Service. (The record, set in 1994, is 5.54 inches in one day).

No injuries or deaths had been reported in the region Saturday night.

In Southern California, light to moderate rain was falling in the Los Angeles area on Saturday and was expected to be accompanied by strong wind gusts through the evening, forecasters said. A high-wind warning is in place for most of the area’s mountains and the Antelope Valley.

The current downpour is being driven by an atmospheric river flowing from the Pacific Ocean, a meteorological phenomenon that carries condensed water vapor from other parts of the world.

An unusually strong and long-lasting atmospheric river on the West Coast just after Christmas led to the deaths of five people after trees fell on vehicles in three separate episodes, the authorities in Oregon said. Tens of thousands in the Pacific Northwest lost power.

Significant flooding was expected in the Sacramento area until 10 p.m. on Saturday, and heavy snow at higher altitudes, National Weather Service forecasters said.

Officials urged drivers to turn around if they came upon flooded roads. Sacramento firefighters rescued several teenagers from tree limbs early on Saturday after their car was stuck in floodwaters. No injuries were reported, the authorities said.

A map showing the precipitation forecast for California and surrounding areas for December 29 to January 3.

Highway 92 from Skyline Boulevard to Main Street in Half Moon Bay was closed because of flooding.

The greatest risk of the extreme weather is in previously burned areas along the coast, William Churchill, a forecaster and meteorologist with the National Weather Service’s Weather Prediction Center in College Park, Md., said this week. Rapid, prolonged rainfall could cause mudslides or debris flows, he said.

But in California — where reservoir levels have fallen, major rivers have run nearly dry and residents have been under emergency conservation orders for months — a storm that is dumping rain and snow on the region brings hope that this winter could at last break the state’s punishing dry spell.

The National Weather Service issued a winter storm warning for parts of the Sierra Nevada in Central California, near Yosemite National Park, saying that as much as five feet of snow could accumulate at the highest elevations.

More rain is in the forecast across the state during most of the first week of the new year.

Water experts are normally circumspect when trying to explain the impact of a single atmospheric river on the state’s current drought, which began in 2020. But they have a glimmer of hope as a succession of storms are in the forecast.

“The whole weather outcome in parts of the West hinges on these atmospheric rivers,” said Marty Ralph, the director of the Center for Western Weather and Water Extremes with the Scripps Institution of Oceanography. The storm, he added, “is looking like a potent contributor to busting the drought.”

Karla Nemeth, the director of the California Department of Water Resources, the agency that manages the Golden State’s most precious resource, said that California must toe a fine line during intense winter storms. On one hand, the state desperately needs winter rain and snow to replenish water supplies before the annual dry spell that often persists from spring through fall.

But climate change has also intensified weather extremes in the West, and long bouts of heavy rain can cause devastating flooding or mudslides in areas that have recently burned. Warm storms in particular could melt snow prematurely and send a torrent of water down mountains and into already saturated cities.

“This is kind of a Goldilocks situation,” Ms. Nemeth said. “We’re cautiously optimistic.”

On California’s ski slopes, the unusually heavy snowfall was a welcome gift. Mammoth Mountain, a resort on the border of Yosemite National Park, expected to see several feet of snow on Saturday, with more snowfall expected through mid-January, said Lauren Burke, the resort’s director of communications.

The resort had already benefited from heavy snowfall this winter, including 10 to 15 feet of snow in the past month alone, Ms. Burke said. By midday Saturday, the resort was recording 90 to 131 inches of snow at its base depth, among the deepest in the country, according to data from On The Snow, which tracks snow cover at resorts nationwide.

“The snowpack holds up really well, even with this warmer, wet, heavy snow,” Ms. Burke said. “It just kind of slathers the mountain and builds up a really deep base.”

Significant snowpack has accumulated across the Sierra Nevada region, including, in the Southern Sierra, nearly 200 percent of the average snow water equivalent that is typically recorded at this time of year, according to data from the California Department of Water Resources.

While cautioning against the risk of flooding, experts say the storms are on track to be largely beneficial to the state. That’s in part because the water levels of the West’s major rivers and reservoirs are already so much lower than normal, so it would take an extraordinary amount of rain over a short period of time to fill them back up; the worst flooding takes place when big waterways and reservoirs spill over their banks in populated areas.

Ms. Nemeth noted, for instance, that the coming series of storms could boost the water storage supply by about a third at Lake Oroville, one of the state’s largest reservoirs and by some measures its most important. That would bring the stored water supply to about 1.5 million acre feet, which is still less than the 1.6 million acre feet that she said would be ideal.

Recent research has shown that atmospheric rivers are the source of as much as half of the precipitation along the West Coast.

Dr. Ralph and his colleagues have developed a system for categorizing the storms borne by atmospheric rivers that is similar to the system for categorizing hurricanes. And they believe that with the recent advances in the accuracy of forecasting, water managers can take better advantage of wet periods by more precisely releasing or holding water at reservoirs.

He said that the center’s high-tech forecasting tools and models show there could be more rain deep into January in California.

Jeffrey Mount, a senior fellow with the Public Policy Institute of California’s Water Policy Center, said that a rainy January would not only deliver relief to the state’s residents, but it would also be a lifeline to salmon, migratory birds and other species that have been struggling in the state’s ailing waterways and wetlands.

Still, he emphasized that one downpour will not end the extreme drought in the West, nor should it cause state leaders to bring any less urgency to figuring out how to live with less water.