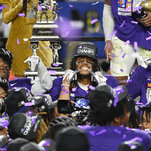 GLENDALE, Ariz. — Sonny Dykes is not the ideal of the jut-jawed football coach. He opens his program up, instead of building walls around it. He freely acknowledges there were times when he was a younger coach — several, in fact — that the pressure of winning games became suffocating.

And he is not afraid to flash his western Texas humor — inviting Michigan Coach Jim Harbaugh over to his hotel room the night before their College Football Playoff semifinal to crack open a bottle of bourbon. (Harbaugh, for the record, declined, saying it was past his bedtime.)

What Dykes is doing though, in his first year at Texas Christian University, is turning the college football world on its ear.

The Horned Frogs, who were picked to finish seventh in the Big 12 with an unremarkable roster, little following outside their Fort Worth campus and a hypnotic animated toad as their talisman, are on the brink of a national championship after shocking Michigan, 51-45, in a wild, inside-out, upside-down College Football Playoff semifinal on Saturday.

The victory sent the Horned Frogs, who began the season unranked, storming onto the field knowing their magical run will culminate on Jan. 9 in the national championship game in Inglewood, Calif.

There the interlopers will meet Georgia, which scored a touchdown in the last minute to beat Ohio State in the Peach Bowl, winning a battle of two of college football’s blue bloods who ritually make the sport’s playoff showcase their own.

The last time T.C.U. played for a national championship it was in the 1938 season, where it claimed a title by beating Carnegie Mellon in the Sugar Bowl.

“We’re know we’re going to hear it again,” said Dykes, whose players listened to analysts — and even Michigan players — who wondered how the Horned Frogs could stay in the game. “It’s not going to stop now. We play in 10 days and we’re going to hear the same crap.”

On Saturday in the desert, they used any slights as fuel.

T.C.U.’s undersized, unconventional defense thwarted the previously unbeaten Wolverines — returning two interceptions of quarterback J.J. McCarthy for touchdowns and frustrating Michigan’s vaunted rushing attack — and the offense, which got an enormous second-half boost from backup running back Emari Demercado, executed to near perfection when it mattered most.

As much fight as Michigan showed, rallying from 18 points late in the third quarter to draw within a field goal, the Wolverines bungled a bushel full of opportunities — including their last fourth-down gasp, when the snap from center caught McCarthy off guard and the ball bounced off his knee, leading to a mad scramble of laterals with less than 30 seconds to play.

The Horned Frogs then had to survive a disquieting moment when officials reviewed the play for targeting before deciding that no foul had occurred.

“It was a hell of a way to end a ballgame,” Dykes said.

The Wolverines had spoken this week of being much better prepared this season than last, when they met their two stated goals by winning the Big Ten and snapping an eight-game losing streak to Ohio State. In their playoff loss to Georgia a year ago, they were just happy to be there, they acknowledged this week.

But from the start on Saturday, they played as if their place here was not a privilege but a burden. Michigan fumbled away one scoring chance in the end zone, wasted another when a trick play went kaput, settled for two short field goals, and surrendered a touchdown when Bud Clark — who also recovered the fumble — picked off McCarthy and bolted 41 yards for the game’s initial score, giving T.C.U. a lead it never relinquished even amid the chaos.

The Horned Frogs, by contrast, were superb when it mattered most.

The roots of their offensive execution, particularly near the goal line, were borne from the disappointment of their only loss — to Kansas State in the Big 12 title game in early December.

When T.C.U. was stonewalled on back-to-back cracks from inside the 1-yard line in overtime, Dykes immediately pledged to be better there if his team got into the playoff. Earlier this week, he said the Horned Frogs would have to be stronger up front, but also more creative.

“We’ve put a lot of work into, a lot of attention to it,” Dykes said several days ago. “When you look at college football these days, teams are so evenly matched, typically what the game comes down to is being able to convert third downs and, especially, fourth downs and scoring situations.”

Quarterback Max Duggan, after being stuffed on third down at the goal line, bulled over Michigan safety Rod Moore and tumbled into the end zone after an offensive wrinkle left him with one defender to beat on fourth down.

Duggan later evaded a blitz to hit Taye Barber on a crossing route — an effective weapon all afternoon — for another score from near the goal line.

Meanwhile, Michigan floundered when it sniffed the end zone, mostly by being too clever for its own good — as if Rich Rodriguez had hijacked Harbaugh’s headset.

The Wolverines, on fourth-and-goal at the 2 on the game’s opening possession, ran their version of the Philly Special, the reverse and throw back to the quarterback that the Philadelphia Eagles used to great acclaim to bamboozle the New England Patriots in the Super Bowl in 2018.

McCarthy was blanketed and receiver Colston Loveland, with no one to throw to, was dropped at the 10 by Dylan Horton.

“Put that on me,” Harbaugh said. “They had it wired and they had it well defended. Sitting here now, I definitely wished I would have called a different one.”

The play also sent a message to the Horned Frogs — that Michigan, which had mauled so many opponents during the regular season, had resorted to trickery.

“When they were going really deep in their bag, I knew we were in their heads,” said Johnny Hodges, a transfer from Navy where he started only four games in three seasons (which included a redshirt year). “They weren’t confident. You don’t win championships on trick plays.”

Instead, it was the Horned Frogs who ran with impunity — particularly Demercado, who replaced injured starter Kendre Miller in the second quarter and rushed for 150 yards and a touchdown on 17 carries and also bought Duggan time by repeatedly picking up the Michigan blitz.

He did so again after losing a fumble — the only one of his career — that had allowed Michigan to close within 41-38 early in the fourth quarter. His block allowed Duggan to hit Quentin Johnson on a short crossing route that he turned into a 76-yard score.

“When you first get out in the moment, your heart is racing,” said Demercado, a junior college transfer who will play his final college game just down Interstate 105 where he grew up in Downey, Calif. “But you get hit once or twice and it’s just football.”

One of the more intriguing story lines entering Saturday was how the Horned Frogs’ unconventional defense — a three-lineman, three-linebacker and five-defensive back unit designed to stop the Air Raid offenses that are prevalent in the Big 12 — would hold up against a Michigan team that preferred mugging its opponents.

“You don’t see them playing against people who look like us, so it’s really hard to watch the tape and say, ‘OK, this will definitely work, but this won’t,” Michigan co-offensive coordinator Matt Weiss said. “At the same time, they have the same issue. They’re not seeing us go against a 3-3-5 defense, so they don’t really know what we’re going to look like either.”

The first snap of the game seemed to provide an encouraging clue for Michigan.

The Wolverines sent tailback Donovan Edwards straight up the gut behind the heart of its decorated, bruising offensive line — center Olusegun Oluwatimi and guards Trevor Keegan and Zak Zinter.

Edwards was greeted at the line of scrimmage by a gaping hole and a few steps later he was in the clear. But Edwards, who repeatedly sprinted away from Ohio State’s defense in the thumping of their rival, soon found out he wasn’t in the Big Ten anymore.

Instead of a message-sending touchdown, Clark tracked Edwards down and collared him at the 21-yard line with what turned out to be a tone-setting tackle: There would be no running away from the Horned Frogs.

There would also be no catching them.