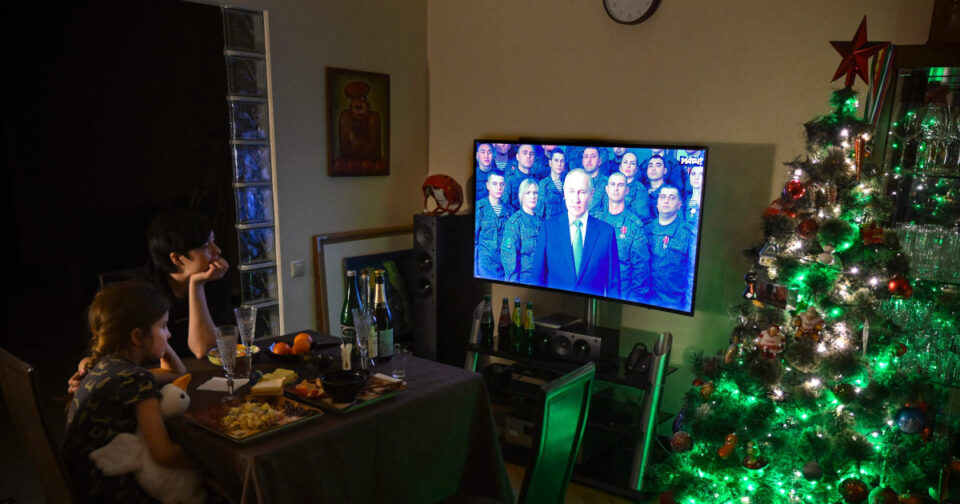 A few minutes after Zelenskyy’s speech — released just before midnight Kyiv time on New Year’s Eve — numerous blasts were heard in the capital and around the country. The attacks followed a barrage of more than 20 cruise missiles fired across Ukraine on Saturday — and many bombardments earlier.

As the war drags into its 11th month, Moscow was unprepared for the staunch resistance and billions of dollars in Western weapons that have turned the tide in Ukraine’s favor.

Russian troops have been forced out of more than half the territory they took in the first weeks of what Putin calls a “special military operation.”

Putin, breaking with tradition by delivering the New Year message flanked by troops rather than the Kremlin’s walls, talked sternly and combatively about 2022 as the year that “clearly separated courage and heroism from betrayal and cowardice.”

While trying to rally support among Russians amid embarrassing battlefield setbacks and growing internal criticism of his military strategy, Putin thanked Russian troops, but he also demanded more from them.

“The main thing is the fate of Russia,” Putin, dressed in a dark suit and tie, said. “Defense of the fatherland is our sacred duty to our ancestors and descendants. Moral, historical righteousness is on our side.”

Russia had planned a swift operation, but with the war dragging on it has been forced to put society on more of a war footing: calling up more than 300,000 reservists, retooling an economy hurt by Western sanctions and saying publicly that the conflict may be long.

Reiterating that the West is supposedly intent on “destroying Russia” by using Kyiv, Putin vowed he will never allow that. He signaled once again, that the war, albeit hard, will continue.

“We have always known, and today we are again convinced that the sovereign, independent, secure future of Russia depends only on us, on our strength and will,” he said.

Zelenskyy promised the return of lands Moscow proclaimed it had annexed in September.

While listing Ukraine’s successes, Zelenskyy referred to the Crimean Bridge, Moscow’s symbol of the annexation of the peninsula that linked it with Russia and that was torn by an explosion in October.

While Putin immediately blamed Kyiv for orchestrating the powerful blast, Ukraine had not previously claimed responsibility for it — or any other attacks inside Russia, since Russia’s Feb. 24 invasion.

“This year has struck our hearts. We’ve cried out all the tears. We’ve shouted all the prayers,” Zelenskyy said.

“We fight and will continue to fight. For the sake of the key word: ‘victory’.”

From Watergate to Jan. 6: Patrick Leahy leaves the Senate after nearly 50 years

Biden to laud economic wins as GOP takes over House

Damar Hamlin, though not in uniform, back with his Buffalo Bills teammates