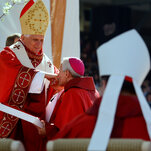 VATICAN CITY — As thousands of Roman Catholics flowed into St. Peter’s Basilica on Monday morning to see Pope Emeritus Benedict XVI lie in state and pay their last respects, bereft conservatives mourned the loss of a leader who championed the traditions, doctrines and church law and order they cherished.

“He was the sun that illuminated all of us,” said Cardinal Angelo Amato, a former secretary of the church office on doctrine, which Benedict ran before becoming pope, and leader of the Vatican office that makes saints. He referred to Benedict as “the Holy Father,” and called him a “saint,” adding, “When there is no sun, there is only fog.”

Benedict, who died on Saturday at age 95, stood as the church’s pre-eminent conservative thinker and leader in the decades preceding, during and following his pontificate, which ended in 2013 when he stunningly broke with church tradition by becoming the first pope in nearly 600 years to resign. Pope Francis, his successor, has a less orthodox vision, infuriating conservatives who accuse him of causing confusion as he undid a great deal of Benedict’s legacy by firing and stripping of authority some of Benedict’s top cardinals.

Francis told priests and bishops to be welcoming to Catholics who had divorced and remarried, said of an allegedly gay priest “Who am I to judge?” and restricted the Latin Mass adored by traditionalists. He has expressed openness to same-sex unions, welcomed a debate on the ordination of a limited number of married men as priests and shrugged at the potential for a schism, or break with Rome by the hard right.

Through it all, many church traditionalists — and also right-wing political populists — invoked the name of Benedict as the church’s real moral authority and sought to draw him into an internecine ideological war.

Now he is gone.

“There’s a vacuum among the conservative crowd,” said Benwen Lopez, 43, a conservative seminarian from Mumbai, India, studying in Rome, who was one of the first mourners filing into the church after the viewing of Benedict’s body officially began at 9 a.m. “The Holy Spirit will fill that vacuum and guide those who feel lost.”

There is no shortage of them. The Catholic hierarchy in the United States, largely appointed by Benedict, is still dominant and has openly resisted Francis in its antagonism to Catholic political leaders such as President Joe Biden and former Speaker Nancy Pelosi. The church’s future seems to lie in the southern hemisphere, especially in Africa and Asia, where conservatism is still prevalent.

“There was a vibrant conservative movement in Catholicism well before Joseph Ratzinger came along, and there will be one now that he’s gone,” said John Allen, a longtime Vatican expert and the founder of Crux, a Catholic news website.

He suggested that regionally prominent conservatives, “mini-Benedicts,” would fill Benedict’s red shoes around the globe. But he also said that traditionalists and conservatives who had sought to tie their agendas to Benedict in his retirement would not necessarily stop now that he was dead, especially because he was no longer around to tell them to knock it off.

“For the alt-right in the church or the deeply traditionalist currents in the church,” he said, “there is a sense in which Benedict may be even more useful in death.”

Mr. Allen said that Benedict’s closest collaborator, Archbishop Georg Gänswein, would have the responsibility to keep Benedict from becoming a papal football.

On Monday, Archbishop Gänswein, who is looked at with deep suspicion by allies of Francis, accepted the condolences of nuns, priests, Vatican firefighters and other faithful next to Bernini’s towering bronze Baldachin canopy.

Steps away lay Benedict, rested between Swiss Guards, his head propped on crimson pillows, his face waxen, almost unrecognizable. He was clad in a miter, red vestments and simple black shoes, but not the silver staff with crucifix or pallium, the vestment symbolizing papal authority.

“No one can replace him but his legacy remains,” said Paul Badde, 74, the German author of “Benedict Up Close” who has worked as a Rome correspondent for EWTN, the conservative Catholic American news network.

“He represented the West par excellence,” he said. “The Constantinian era, the European era of the church, ends with him.”

While Benedict preferred ornate clothing from the church’s past, and eased the return of the old Latin liturgies, his most ardent supporters rejected the traditionalist, and even conservative, labels as so limiting as to be incorrect.

“Traditionalist by clothing maybe, theologically no way,” said Princess Gloria von Thurn und Taxis, a German aristocrat who said she saw her good friend Benedict in November, when she knelt to kiss his ring and held his hand, but found his voice so soft as to be unintelligible.

For decades, though, admiring Catholic conservatives, and the liberals he shot down, heard Benedict loud and clear.

As the powerful keeper of church orthodoxy from 1981 to 2005 during the papacy of his predecessor and mentor, John Paul II, Benedict — who was then Cardinal Joseph Ratzinger of Germany — served as the Vatican’s chief doctrinal official. “God’s Rottweiler,” his critics called him.

He acted as an enforcer, conservative compass and culture warrior, veering the church away from what he ultimately came to consider the liberal overreach of the reforms of the Second Vatican Council in the 1960s. He sought to suppress the social activism in the church that he suspected of Marxism. He crushed dissent among more liberal theologians and drew a hard line against gays. He helped promote clerics in his and John Paul II’s mold.

After John Paul II’s death in 2005, Benedict gave a defining speech against the “dictatorship of relativism,” delivered before the conclave to choose the next pope. The College of Cardinals chose him to continue John Paul’s legacy and essentially encourage the church to make a last-ditch conservative effort to resist the growing forces of secularism.

But as pope, and the leader of the world’s 1.3 billion Roman Catholics, the soft-spoken theologian seemed to soften. His first encyclical was called “God is Love.”

Instead of a draconian papacy, it was a complex and often overwhelmed one, lurching from crisis to crisis. When Benedict retired amid more internal scandals in 2013, saying he lacked the energy to do the job, he lost his power to promulgate dogma. But among a small but powerful coterie of conservatives — several of whom quietly excoriated Benedict for walking away from the job — he kept the power to influence and validate their views.

Even as Benedict mostly upheld his vow to remain “hidden from the world,” Vatican culture warriors carried his name like a battle standard into the ideological trenches. Sometimes he grew frustrated with the use of his name to undercut his successor. In 2017 he scolded leading conservatives, saying their anger risked tarnishing his own pontificate.

But other times, he — or the aides writing in his name — used his sway to try and push church policy to the right.

As Francis appeared to be considering whether to lift the restriction on married priests in remote areas, Benedict firmly defended the church’s teachings on priestly celibacy in a 2020 book. Conservatives rejoiced when Francis ended up rejecting the proposal.

Now no one has that influence.

“His death is in a certain sense a loss for the conservative wing of the Church,” said Sandro Magister, a veteran Vatican observer at L’Espresso magazine. Mr. Magister argued that the conservatives were especially endangered because they had failed to understand the nuance of Benedict’s vision, his embrace of holiness, but also of reason and Enlightenment thinking.

He said the conservative movement was “very weak” because it is missing “major figures who can give it direction and lead it to unity.”

Some analysts even considered the conservative streak that dominated the church for 35 years now to be finished. Francis continues to promote cardinals to the college that will select his successor when he dies or resigns.

But Vatican politics are unpredictable. And Benedict’s legacy still lingers.

Shortly before a special mass for Benedict in a chapel behind his remains, Mr. Lopez, the seminarian, approached Archbishop Gänswein. “I’m so glad for Pope Benedict,” he said, clasping the prelate’s hand. “He has been instrumental in drawing my conversion back to the Catholic faith.”

“Pray to him,” Archbishop Gänswein instructed. “For him. And to him.”

Pelé Honored by Thousands of Brazilians at 24-Hour Funeral