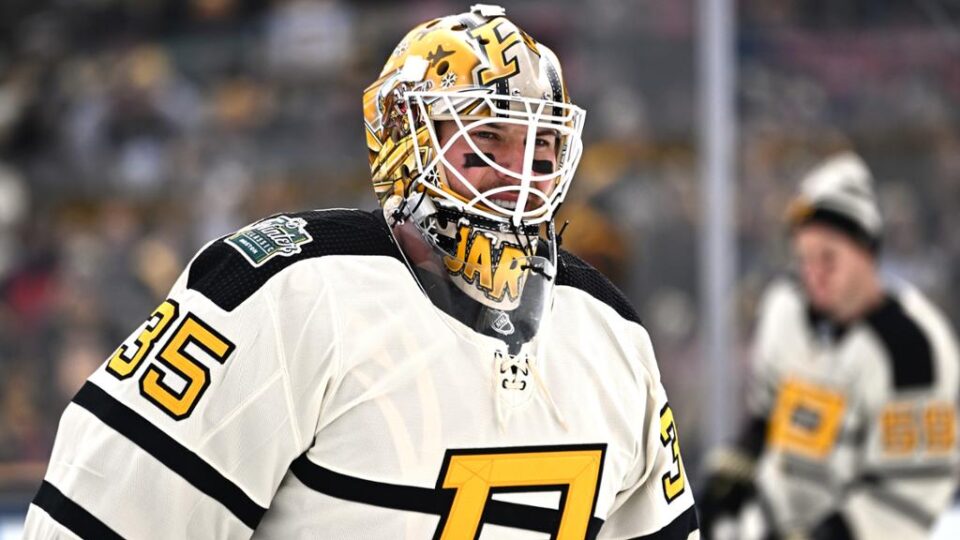 BOSTON — Tristan Jarry left with a lower-body injury, and the Pittsburgh Penguins goalie was replaced by Casey DeSmith with 4:30 remaining in the first period of the 2023 Discover NHL Winter Classic at Fenway Park on Monday.

“I don’t have any update on Tristan,” Penguins coach Mike Sullivan said after the 2-1 loss to the Boston Bruins. “Obviously he is being evaluated for a lower-body injury. It’s tough to lose a guy that early in the game.”

DeSmith, playing his first NHL outdoor game, made 19 saves but allowed two third-period goals in the Penguins’ fifth straight loss. The game was 0-0 when Jarry left.

“I think it was a little bit of uncharted territory,” the 31-year-old said. “The last time I was playing an outdoor game was like 10 years ago. So, just kind of jumping in to an outdoor game carries a few more challenges than a regular game.

“Overall, I was really happy with how I played.”

Jarry was slow to recover after making what appeared to be a routine save earlier in the period, and it looked like he was bothered making a save on Bruins forward Tomas Nosek at 13:20.

He skated to the bench during the television timeout at 15:30, consulted with the Penguins trainers and immediately left the game, walking slowly down the steps of the dugout to get to Pittsburgh’s dressing room.

The Winter Classic was Jarry’s first NHL outdoor game. The 27-year-old goalie is 15-5-4 with a 2.75 goals-against average and .918 save percentage in 25 games this season.

When the second period began, Mike Chiasson, the Penguins’ emergency backup goalie, was in uniform and in goalie gear in the third-base dugout.

Chiasson has no NHL experience. He is the goaltending development coach at the UPMC Lemieux Sports Complex in Cranberry, Pennsylvania, and the Penguins manager of youth hockey.

The 36-year-old is from Cole Harbour, Nova Scotia, the hometown of Pittsburgh captain Sidney Crosby.

Chiasson sometimes serves as a third goalie during Penguins practices, helping manage the workload of Jarry or DeSmith.

‘Super Inspiring’: Nelly Korda’s Brother and Tennis Star Sebastian Korda Once Revealed How He Sees the LPGA Star as a Role Model After His First Win at Wimbledon