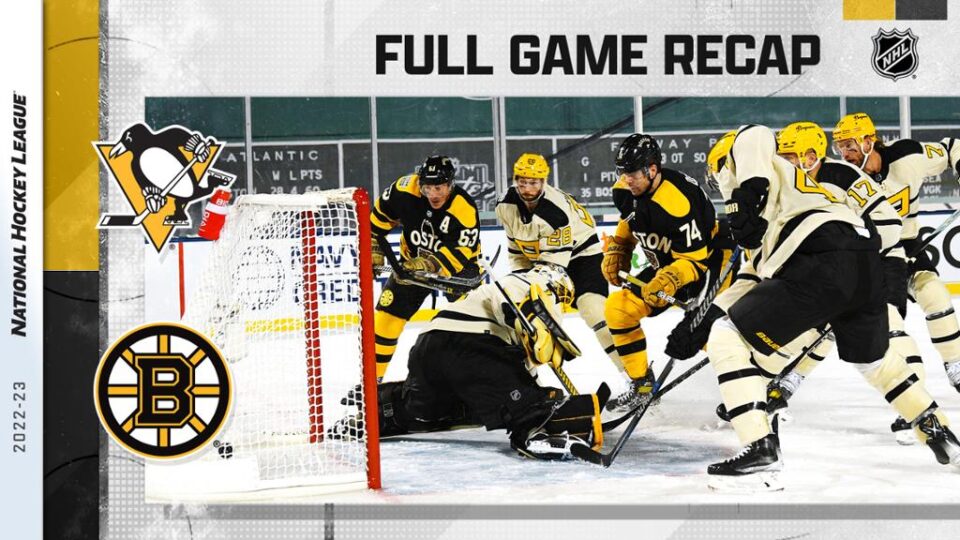 BOSTON — Nick Foligno asked to have the room after the second period, the Boston Bruins forward ready to deliver a message to his teammates about doing what they can do to avoid regrets that would spoil their experience at the 2023 Discover NHL Winter Classic.

Jake DeBrusk made sure there were only postgame celebrations and memories created that will last forever by scoring two goals in the third period, lifting the Bruins to a 2-1 win against the Pittsburgh Penguins in front of a sellout crowd of 39,243 at Fenway Park on Monday.

“This is an event and it’s a dream come true, and we don’t want to waste it,” DeBrusk said, relaying Foligno’s message. “You don’t want to come after a game like tonight and think you could have done more or wish you would have done something because you never know, it’s very rare if you get another chance to do it. I think it was more just along the message that we know what we can do together as a group, we’re the best third period team in the League and let’s go prove it.”

DeBrusk scored to tie the game 1-1 with 12:14 remaining and scored the winner with 2:24 left. They were his first two goals in an NHL outdoor game. He has played in three.

The Penguins thought Evgeni Malkin might have scored a last second tying goal, but it was immediately waved off because a time had expired.

“You want to win,” Bruins coach Jim Montgomery said. “It’s filled with Bruins fans. It’s an incredible atmosphere. We’re at Fenway Park. So, for that reason it’s great to come out with the W. And, again, in the third period this team finds ways to raise their level and take over a game.”

“It’s just pure joy and happiness,” Ullmark said. “It’s something I’ve dreamt about for [15] years, since I saw the first one [2008 NHL Winter Classic] at home in Sweden. I always dreamt about it and I was always very jealous of the people that played before me and had an opportunity. Now we had the opportunity. Like Jake said, it’s a dream come true.”

DeSmith replaced Jarry 4:30 remaining in the first period. Jarry left because of a lower-body injury.

Penguins coach Mike Sullivan said Jarry was being evaluated and he didn’t have a further update.

“It’s tough to lose a guy that early in a game like that,” Sullivan said. “But I thought ‘Case,’ I thought he competed hard in there for us. It was, obviously, a really competitive hockey game. It was an even game. There’s a fine line between winning and losing. We ended up on the wrong side of it tonight.”

The Winter Classic was the NHL’s 36th regular-season outdoor game and second at Fenway Park, which also hosted the 2010 Winter Classic between the Bruins and Philadelphia Flyers. The Bruins also came back to win that game 2-1, but in overtime.

“It’s a lot better when you win,” Bruins center Patrice Bergeron said. “It’s a great event. The League does a great job of including everyone and making sure we’re all taken care of. That being said, it’s not the same feeling when you come up short, so we’re pretty happy with it.”

Danton Heinen and Jeff Carter had a strong forecheck. Heinen got the puck, quickly moved it to the front of the right post and Kapanen was there to bang it in.

“It was pretty surreal,” Kapanen said. “I think some players go without playing in any of these. I’ve been lucky to get two. Just an amazing atmosphere out there.”

Video: Bruins and Penguins players walk out at Fenway Park

DeBrusk tied it 1-1 at 7:46 of the third period, scoring six seconds after a Bruins power play expired. Brad Marchand made a move in the right circle to get around Carter and got the puck to DeBrusk at the post. DeBrusk wrapped the puck in through DeSmith’s legs.

“We get a couple of chances and we don’t extend our lead, they hang around and get a goal,” Penguins center Sidney Crosby said. “Then, it’s next goal wins from there and they got it. Ideally, we would have found a way to extend our lead.”

DeBrusk got it, scoring off a rebound of Taylor Hall’s backhanded shot that DeSmith stopped with his left pad to make it 2-1 at 17:36.

“We’re 1-1 and Pittsburgh was forechecking us good and we weren’t getting pucks out and I was getting a little negative, and ‘Bergy’ goes, ‘We’ll be all right,'” Montgomery said. “It was another way for us to communicate to be like, these guys got it, and I can just shut up.”

NOTES: The Bruins have outscored their opponents 54-23 in the third period, an NHL-best plus-31 goal differential. … Boston improved to 3-3-3 when trailing after two periods this season. … Crosby has gone four straight games without a point, his longest drought of the season. … The Penguins played without defenseman Kris Letang, who was in Montreal following the death of his father. Letang is also day to day with a lower-body injury.

Tesla driver who plunged his family off California cliff did so on purpose, officials say