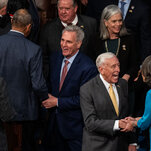 On the first day of the new Congress, Representative Kevin McCarthy fell short repeatedly in his bid to become speaker as a right-wing rebellion prompted a historic floor fight.

WASHINGTON — Republicans were deadlocked on Tuesday over who would lead their new majority after Representative Kevin McCarthy of California lost three votes for the top job, as hard-right lawmakers in open revolt dealt their party leader a humiliating setback and prompted a historic struggle on the House floor.

The mutiny, waged by ultraconservative lawmakers who for weeks have held fast to their vow to oppose Mr. McCarthy, paralyzed the House on the first day of Republican rule, delaying the swearing in of hundreds of members of Congress, putting off any legislative work and exposing deep divisions that threaten to make the party’s House majority ungovernable.

After three fruitless votes, the House adjourned without a leader late Tuesday afternoon, agreeing to reconvene at noon on Wednesday to begin the process anew.

That did not end the California Republican’s bid for speaker. He has vowed not to back down until he secures the post, forcing multiple votes if necessary until he wins and raising the prospect of a grueling stretch of votes that could go on for days.

“I’m staying until we win,” Mr. McCarthy told reporters between the second and third votes. “I know the path.”

House precedent dictates that members continue to take votes until someone secures the majority needed to prevail. But until Tuesday, the House had not failed to elect a speaker on the first roll call vote since 1923, when the election stretched for nine ballots.

It was not clear how long it might take for Republicans to resolve their stalemate this time, or what Mr. McCarthy’s strategy was, if he had one, for coming back from an embarrassing series of defeats. No viable challenger has yet emerged — Representative Andy Biggs of Arizona, a ringleader of the rebellion, drew only 10 votes during the first ballot — but if Mr. McCarthy continues to flounder, Republicans could shift their votes to an alternative, such as his No. 2, Representative Steve Scalise of Louisiana.

On Tuesday, right-wing Republicans coalesced behind Representative Jim Jordan, a founding member of the ultraconservative House Freedom Caucus, as an alternative to Mr. McCarthy, whom they derided as being single-mindedly obsessed with winning the job and willing to do whatever was necessary to do so.

“Maybe the right person is someone who hasn’t sold shares of himself to get it,” Representative Matt Gaetz of Florida said when he rose to nominate Mr. Jordan instead, as Mr. McCarthy sat nearby wearing a smirk.

Mr. Jordan, a onetime rival who has since allied himself with Mr. McCarthy, pleaded with his colleagues to unite behind the California Republican.

“We need to rally around him and come together,” Mr. Jordan said.

But on Tuesday, Republicans refused to do so. The failed votes showed publicly the extent of the opposition Mr. McCarthy faces in his quest for the speaker’s gavel. With all members of the House present and voting, Mr. McCarthy needs to receive 218 votes to become speaker, leaving little room for Republican defections since the party controls only 222 seats. He fell short again and again, drawing only 203 on the first two ballots.

By the third ballot, only one lawmaker had changed his position — Representative Byron Donalds of Florida, a member of the Freedom Caucus who shifted his support to Mr. Jordan, leaving Mr. McCarthy with 202. Mr. Donalds later told reporters that he was open to voting for Mr. McCarthy again, underscoring the unwieldy nature of the process.

“Our conference needs to recess and huddle and find someone or work out the next steps, but these continuous votes aren’t working for anyone,” Mr. Donalds said in a statement.

A quintet of Mr. McCarthy’s detractors including Mr. Biggs, the former Freedom Caucus chairman, and Mr. Gaetz had telegraphed loudly for weeks that it would oppose him for speaker.

But many others, such as Representative Michael Cloud of Texas and Josh Brecheen of Oklahoma, an incoming freshman, had remained quiet and kept their opposition under the radar. As they made their positions known during the first vote, the number of defectors piled up, quickly approaching what Mr. McCarthy’s team had privately hoped would be the worst case scenario.

The result was that what was supposed to be a day of jubilation for Republicans instead devolved into a chaotic display of disunity within the party. It all but guaranteed that even if Mr. McCarthy eked out a victory — an outcome that appeared remote, given the stalemate at hand — he would be a diminished speaker beholden to an empowered right flank.

With Democrats holding together behind their leader, Representative Hakeem Jeffries of New York won more votes than Mr. McCarthy did for speaker on each vote — symbolic victories since Mr. Jeffries did not have the support to claim the top job, but an embarrassing metric for the California Republican who has been campaigning for the post for years.

Voting for Mr. Jeffries were several Democrats who had been expected to lose tough races to loyalists of Mr. McCarthy in midterm elections in which a red wave was projected to sweep Republicans to power with a comfortable margin of control. But the wave never materialized, and in one key election after another, Democrats cruised to victory, handing Mr. McCarthy the razor-thin majority that now torments him.

During the first vote on Tuesday, Mr. McCarthy sat placidly on the House floor, as an aide next to him, as well as two of his top deputies, quietly tallied the growing stack of votes against him. While he was seen occasionally ducking off the floor, he largely remained in his seat and did not appear to haggle with the group of rebels between votes, though some of his allies could be seen huddling with members of Mr. McCarthy’s staff, plotting next steps.

Centrist Republicans were not as calm as Mr. McCarthy, and they showed flashes of fury after watching their hard-right colleagues tank their leader repeatedly.

“I think they should be embarrassed,” Representative-elect Mike Lawler of New York said of the rebels. “I think they look ill-prepared to govern. And they have raised doubts among the American people.”

When it was his turn to cast a vote on the third ballot, the exasperated Representative Bill Huizenga, a Michigan Republican, stood and said: “Because I’m interested in governing — Kevin McCarthy.”

Outside the chamber in the speaker’s lobby after the second ballot, several Texas Republicans, including Representatives Daniel Crenshaw and Michael McCaul, huddled in an apparent attempt to persuade Mr. Cloud to change his vote.

But even as Mr. Scalise insisted that lawmakers would keep voting “until we get this done,” the group of defectors showed no sign of relenting.

“We’re not going to back down until we get in a room and we decide how we’ll be able to stand up and fight for the American people no matter who the speaker is,” Representative Chip Roy of Texas, one of the ringleaders of the opposition against Mr. McCarthy, said on Fox News. “I’m not blinking.”

Mr. Gaetz went so far on Tuesday night as to write the Architect of the Capitol, demanding to know why Mr. McCarthy had been allowed to move into the speaker’s office.

“How long will he remain there before he is considered a squatter?” Mr. Gaetz wrote. “Please write back promptly as it seems Mr. McCarthy can no longer be considered speaker-designate following today’s balloting.”

The day began inauspiciously for Mr. McCarthy, who gathered Republicans for a private morning meeting in the basement of the Capitol to make a final plea for support ahead of the vote. He argued that the lawmakers opposing him were selfishly disrupting what was supposed to be a day of unity for their own personal gain.

“I earned this job,” Mr. McCarthy told the group.

“Bullshit!” came the response from Representative Lauren Boebert of Colorado, one of the hard-right Republicans opposing him, according to two people who heard the exchange and described it on the condition of anonymity. (She later told a reporter she did not shout anything during the meeting but would not say whether she had spoken up.)

The closing argument appeared to further enrage Mr. McCarthy’s critics, including Representative Scott Perry of Pennsylvania, the chairman of the Freedom Caucus, who emerged from the session fuming.

“This meeting wasn’t about trying to inform people about what it takes to get to 218 and ask for what you want,” he told reporters. “This was about a beat-down and a simulated unity in the room that doesn’t really exist.”

Mr. McCarthy’s allies were equally furious. One incoming committee chairman, Representative Mike D. Rogers of Alabama, who is set to lead the Armed Services Committee, declared during the meeting that those who opposed Mr. McCarthy should lose their committee assignments, according to people in the room.

Mr. McCarthy’s defeats came after an excruciating weekslong lobbying campaign he undertook in an effort to sew up the votes needed for election, in which he toiled to appease his right flank by embracing their tactics and agenda. He took a hard line against legislation to fund the government and avert a shutdown and called on Alejandro N. Mayorkas, the homeland security secretary, to resign or face potential impeachment proceedings.

Over the weekend, in a last-ditch effort to win over critics, he put forward his most significant offers yet, unveiling a package of rules governing how the House operates, including the so-called Holman rule, which allows lawmakers to use spending bills to defund specific programs and fire federal officials or reduce their pay.

His biggest concession was agreeing to a rule that would allow five lawmakers to call a snap vote at any time to oust the speaker. That had been a top demand of conservatives who had previously used the procedure to drive out Speaker John A. Boehner, Republican of Ohio.

But it was not enough to satisfy the right flank of his party, which wanted any single lawmaker to be able to force such a vote. After Mr. McCarthy announced the concessions, nine more Republicans emerged — most of whom had previously expressed skepticism about Mr. McCarthy’s bid for speaker — to criticize his efforts to win them over as insufficient.

Heavy Snowfall and Tornadoes Wreak Havoc on Midwest and South