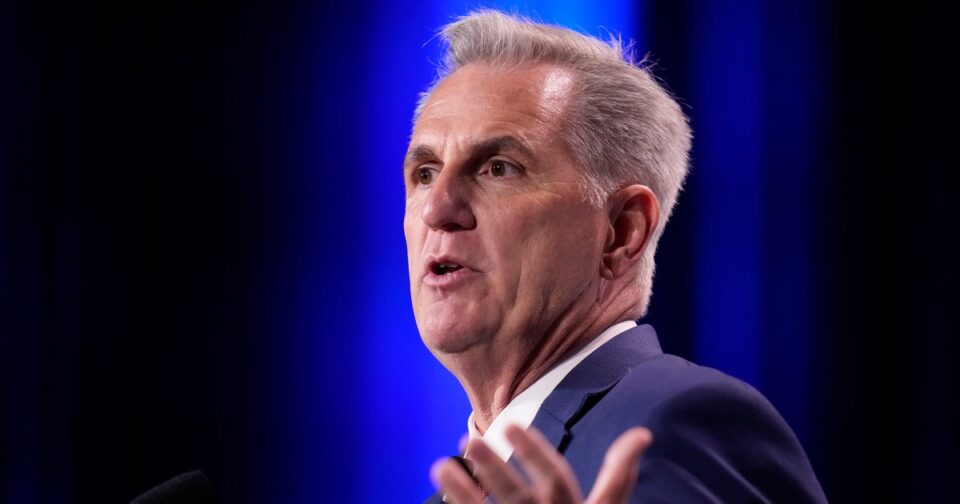 WASHINGTON — For a fifth time in two days, a band of 20 ultraconservative rebels blocked GOP leader Kevin McCarthy from winning the speaker’s gavel, hours after former President Donald Trump called on House Republicans to back him and “close the deal.”

With both McCarthy allies and foes deeply dug in, it ensures that chaos will reign in the House for the foreseeable future. Members began a sixth vote just after 3:30 p.m. ET, which is ongoing.

On the fifth ballot, McCarthy, a California Republican who has served in leadership for the past 14 years, received support from roughly 90% of the 222 GOP members. He was nominated by Rep. Warren Davidson, R-Ohio, a member of the far-right Freedom Caucus who warned his fellow conservatives that their opposition will end up hurting their cause.

“We’re on the precipice of such a destructive argument today. I plead with all — all of my Republican colleagues, let cooler, more rational heads prevail. Let us unite as Republicans to elect the next Speaker of the House,” Davidson said.

But the McCarthy foes showed no signs of backing down. For a second consecutive vote, they rallied behind Rep. Byron Donalds, a Black Florida conservative who won his second term in November.

In nominating Donalds for speaker on the second round, firebrand Rep. Lauren Boebert, R-Colo., said she was not swayed by Trump — “my favorite president” — calling her to tell her to “knock this off.”

“The president needs to tell Kevin McCarthy that, ‘sir, you do not have the votes and it’s time to withdraw,'” Boebert said of Trump to scattered boos.

Rep. Chip Roy, R-Texas, first nominated Donalds as the right-wing alternative to McCarthy on the fourth ballot, evoking Jeffries’ history-making role. “For the first time in history, there have been two Black Americans placed into the nomination for speaker of the House,” Roy said.

Members on both sides of the aisle responded with a standing ovation.

The roll calls have barely changed on each successive ballot. Donalds defected from McCarthy after voting for him twice and Rep. Victoria Spartz, R-Ind., who had backed McCarthy in three votes on Tuesday, voted present Wednesday.

“We have a constitutional duty to elect the Speaker of the House, but we have to deliberate further as a Republican conference until we have enough votes and stop wasting everyone’s time,” Spartz said in a statement. “None of the Republican candidates have this number yet. That’s why I voted present after all votes were cast.”

McCarthy’s speakership bid failed in three consecutive votes Tuesday and one Wednesday, marking the first time in 100 years that the speaker vote has gone to multiple ballots.

“Sure it looks messy,” Rep. Mike Gallagher, R-Wis., said on the House floor as he rose to nominate McCarthy for the fourth ballot, “but democracy is messy by design.”

McCarthy’s opponents have indicated they’re in for the long-haul.

“This is about saving the country and getting somebody that’s going to cut and get us on a financial path of solvency,” said Rep. Ralph Norman, R-S.C., one of the so-called Never Kevins who voted against McCarthy. “I’ll sit here for six more months — it doesn’t matter.”

Still, McCarthy won the support of 202 Republicans — more than 90% of the 222-member GOP Conference — and the number of his detractors has not grown much.

McCarthy’s allies have vowed to hold roll call votes until the opposition caves.

“You can’t accommodate a small group that essentially has you hostage, and that’s what’s going on here — we’re not going to do it,” moderate Rep. Don Bacon of Nebraska, said after Tuesday’s vote series.

And McCarthy could even potentially get some support from Democrats to end the standoff.

“I was thinking today, ‘Gosh, Kevin McCarthy was only short a few votes.’ I wish I could be part of some kind of a unity caucus that would yield him the votes,” Ohio Democratic Rep. Marcy Kaptur told a local news outlet. “I was going around talking to some of my Republican colleagues about that.”

Heading into the fourth vote, McCarthy told reporters he believes he can get to an agreement, saying he has the “same game plan as yesterday.”

Rep. Dusty Johnson of South Dakota, the new head of the business-friendly Republican Main Street Caucus, said, “I’m as confident right now that Kevin McCarthy is going to become speaker of the House as I was a week ago and a month ago.”

Other McCarthy allies expressed frustration at the conservative rabble-rousers for exposing internal GOP divisions at the very moment Republicans are taking control of the House after four years in the minority. Without a speaker, House lawmakers can’t be sworn in, committees can’t be formed, and GOP investigations into the Biden administration can’t begin.

Essentially, there is no functioning House of Representatives until a speaker is chosen. The House is scheduled to reconvene at noon Wednesday.

“Everybody’s just annoyed, agitated. The people that are doing this, which I count a lot of them as my good friends, need to know when [to] accept the win,” Rep. Doug LaMalfa, R-Calif., said about concessions the conservatives had extracted from McCarthy.

“So take most of the win and go with it and build on it for later.”

In the third and final vote Tuesday, the 20 GOP defectors all cast their votes for Rep. Jim Jordan of Ohio, a founding member of the far-right Freedom Caucus, even though he has endorsed McCarthy and he delivered a nominating speech for him. Jordan later told reporters he only wanted to become chairman of the Judiciary Committee in the new Congress.

Rep. Marjorie Taylor Greene, R-Ga., who is close with Jordan and has endorsed McCarthy, said it was inconsiderate and appalling that the defectors were trying to push Jordan into the speaker’s office.

“Jim Jordan says, ‘I am supporting Kevin McCarthy,’ and he goes out there on the House floor, says it and votes for him repeatedly,” Greene told reporters. Twenty Republicans don’t even respect Jim Jordan enough to respect what he wants to do.”

The remarkable floor fight has pitted Trump loyalists against one another as Trump makes another bid for the White House. McCarthy, Jordan and Greene have been some of Trump’s biggest allies on Capitol Hill, but they’re now facing off against Trump supporters like Rep. Matt Gaetz of Florida and newer leaders of the Trump-aligned Freedom Caucus, Reps. Scott Perry of Pennsylvania and Andy Biggs of Arizona.

Trump endorsed McCarthy for speaker and had been making calls on his behalf.

After speaking with McCarthy, Trump on Wednesday morning gave a full-throated endorsement of the GOP leader and called on House Republicans to rally behind him.

“[I]t’s now time for all of our GREAT Republican House Members to VOTE FOR KEVIN, CLOSE THE DEAL, TAKE THE VICTORY,” Trump wrote in a Truth Social post on Wednesday morning that also disparaged former Speaker Nancy Pelosi.

“REPUBLICANS, DO NOT TURN A GREAT TRIUMPH INTO A GIANT & EMBARRASSING DEFEAT. IT’S TIME TO CELEBRATE, YOU DESERVE IT. Kevin McCarthy will do a good job, and maybe even a GREAT JOB — JUST WATCH!”

McCarthy has explored alternative paths to victory that would require fewer votes, such as getting some critics to abstain, which would lower the overall number needed to win.

“I think we’ll find our way to get there. This is a healthy debate,” McCarthy told reporters. “It might not happen on the day we want, but it’s going to happen. … I think at the end of the day, we’ll get everybody.”

Bacon warned that if conservatives dig in on their opposition to McCarthy, delaying House business in the process, moderates will need to reach across the aisle to try to reach a deal with Democrats on a consensus speaker.

“You can have some folks you can work with, but I think in the end you just go to the top one or two people in the Democratic Party and start making a deal,” Bacon told reporters.

“If they prove to themselves that they can’t function as part of a team, then we’re going to make that decision. But we’re not there. I think Kevin still has lots of runway.”