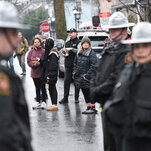 STROUDSBURG, Pa. — The graduate criminology student accused of fatally stabbing four University of Idaho students agreed in his first public court appearance on Tuesday to be extradited from Pennsylvania to Idaho to face murder charges.

The student, Bryan Kohberger, 28, was arrested in Eastern Pennsylvania on Friday and charged in the overnight killings of four students at a home in Moscow, Idaho, on Nov. 13. Mr. Kohberger had entered a Ph.D. program in criminology and criminal justice at Washington State University last summer and moved to Pullman, Wash., a 20-minute drive across the border from the scene of a crime that horrified and confounded the region.

At a news conference on Tuesday, officials provided the first detailed account of the pre-dawn arrest of Mr. Kohberger at his parents’ home in suburban Monroe County, Pa., during which officers broke down the doors and shattered windows to take him into custody.

They said they had executed search warrants to obtain Mr. Kohberger’s D.N.A. as well as to search the home and a white Hyundai Elantra that matched the description of a vehicle seen near the crime scene on the night of the killings.

Maj. Christopher Paris of the Pennsylvania State Police said Mr. Kohberger, whose parents were home at the time of the arrest, surrendered during the raid.

The police have not outlined any motive, and officials in Pennsylvania declined to say on Tuesday whether the suspect had a previous connection to the victims. But the authorities in Idaho were expected to release more details in charging documents once Mr. Kohberger was transferred to that state.

At the extradition hearing, Judge Margherita Patti-Worthington said Mr. Kohberger had to be extradited within 10 days. Major Paris said he hoped to send him to Idaho “as soon as possible,” though he said it was unlikely to happen on Tuesday night.

Mr. Kohberger arrived at the courthouse from jail handcuffed and wearing a red jumpsuit. He did not respond to reporters as they shouted questions, including about whether he had carried out the crime. Mr. LaBar said Mr. Kohberger had told him that he was shocked to be considered a suspect in the slayings.

In court, Mr. Kohberger answered a set of standard questions from the judge and then signed a waiver allowing his extradition. When Judge Patti-Worthington asked him if he was mentally ill or taking any medications that would affect his ability to make a decision, he said that he was not.

A woman in the front row of the courtroom wept as the hearing took place, prompting a sheriff’s deputy to bring her tissues.

Michael Mancuso, an assistant district attorney in Monroe County, said afterward that Mr. Kohberger may have agreed to be extradited because of an Idaho law that prohibits the release of an affidavit supporting an arrest warrant until a defendant is in the state.

“I definitely believe that one of the main reasons the defendant chose to waive extradition and hurry his return back to Idaho was to need to know what was in those documents,” Mr. Mancuso said.

The affidavit was likely to provide more details about what evidence the authorities had connecting Mr. Kohberger to the crime.

On Tuesday evening, a magistrate judge in Latah County, which includes Moscow, issued an order prohibiting all parties in the proceedings — including lawyers, police officers and other investigators — from speaking about the case outside of court, other than to refer to public records.

In response to the order from Judge Megan Marshall, the Moscow police said it would “no longer be communicating with the public or the media regarding this case.”

The order lasts until a verdict is reached on the charges or a judge modifies the order.

It also emerged on Tuesday that Mr. Kohberger had been pulled over twice for traffic infractions by police officers in Indiana on Dec. 15, while he was driving his Elantra with his father from Washington State University back to Pennsylvania for the holidays.

Indiana State Police released body camera footage from the second of two stops, which was for following too closely behind a truck. It showed that a state trooper had decided to let Mr. Kohberger and his father go with a warning after learning that a sheriff’s deputy had also stopped them a few minutes earlier for speeding. There was no reported connection between the stop and the arrest of Mr. Kohberger two weeks later.

A week before the traffic stops, the police in Moscow, Idaho, had begun urging the public to contact the police if they had any information about a white Elantra in the area of the crime scene. The Indiana State Police said they had no “specific information” about a suspect or license plate that could have helped make the connection.

Mr. LaBar said Mr. Kohberger and his father had decided in August, when the semester began, that they would drive across the country to Pennsylvania together during the winter break.

The four University of Idaho student victims — Madison Mogen, 21; Kaylee Goncalves, 21; Xana Kernodle, 20; and Ethan Chapin, 20 — were killed in a home near campus where three of them lived. The one male victim, Mr. Chapin, was there visiting his girlfriend, Ms. Kernodle.

Friends and relatives of at least one victim, Ms. Goncalves, have said that they are looking to see if they can find any connections.

“I’m biased, but if he’d got to know my daughter, I think it’d be impossible for you to hurt her,” Ms. Goncalves’s father, Steve Goncalves, told NewsNation.

Shanon Gray, a lawyer for the Goncalves family, said family members were planning to attend Mr. Kohberger’s initial appearance in Idaho and to have a representative at all subsequent hearings in the prosecution.

“They want to look in his eyes and let him know they are there and are going to be there,” he said.

Katie Blomgren, who is studying psychology at the University of Idaho and knew Ms. Goncalves and Ms. Mogen since they were all 11, said she was among those struggling to understand the connections, if any, between Mr. Kohberger and the victims.

The killings took place after a seemingly typical Saturday night of college partying. Ms. Kernodle and Mr. Chapin had gone to a party at his fraternity, while Ms. Mogen and Ms. Goncalves went to a bar in town. In a statement on Twitter on Monday night, the bar where Ms. Mogen and Ms. Goncalves had spent the night, Corner Club, said the suspect “was not and has not been” at the bar before.

All four victims had arrived back at the house by 2 a.m.

Also in the three-story residence were two female roommates who apparently slept through the killings and were not harmed. The police have said that when the roommates awoke the next morning, they called friends over to the house, not knowing of the horrors that had unfolded on the second and third floors, and then someone in the group called 911.

As details about the killing emerged and no suspect was arrested, many University of Idaho students left Moscow early for Thanksgiving break and did not return afterward, choosing instead to take classes online. Those who did return to campus said they were double-checking the locks on their doors and windows and were avoiding going out at night.

The police have said they believe a long knife was used in the killings but that they have not found the murder weapon.

Mr. Kohberger had enrolled in the Washington State program after studying criminology and psychology at DeSales University in Center Valley, Pa., where he had helped with a study about what people thought about and felt while they committed crimes.

Friends of Mr. Kohberger described him as having long been interested in psychology. He had previously worked as a security guard for the Pleasant Valley School District in Pennsylvania, the same district in which he attended high school.

An early look at the Eagles-49ers NFC Championship matchup