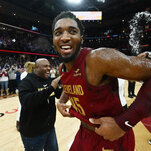 The headlines have started to sound familiar. Giannis Antetokounmpo scored 55 on Jan. 3. Klay Thompson scored 54 and Donovan Mitchell scored 71 on Jan. 2. Luka Doncic scored 50 and 60 and 51. Pascal Siakam and Darius Garland have 50-point games this season. Lauri Markkanen just missed, with a 49-point game on Thursday. Who’s next? Kevon Looney?

An event that was a rarity as little as a decade ago is now becoming commonplace, and this season in particular, players are going off for 50 or more regularly.

But lately, 50-point games have taken off, with an average of nearly 20 over the previous four seasons. So far this year, with a little less than half of the season complete, there have been 14.

So what’s going on?

To start with, teams as a whole are scoring more. The average N.B.A. team has scored 113.8 points a game this year, the highest total since 1970. Ten years ago the average was 98.1. The pace of games has also sped up, with teams averaging nearly 100 possessions every 48 minutes over the past five seasons, which had not been done since the 1980s. More possession, more shots, more points for everyone.

In eight of the 14 50-point games this season, the player made at least six 3s, with Thompson and Garland sinking 10 each. (Shout-out to Antetokounmpo for scoring 55 while shooting 0-for-3 from 3.)

Golden State Coach Steve Kerr this week pointed to 3-point shooting and pace as key factors in the surge of 50-point performances. He also blamed defense.

“Transition defense is at an all-time low in this league,” he said. “Every single night on League Pass, you see five guys standing there, somebody shoots, somebody runs long, and everybody goes: ‘Oh, the guy’s laying it up down there.’

“We do it, every team does it. I think the game has gotten really loose and the players are so talented, it’s made for a lot of big scoring nights.”

The 14 games this season were accomplished by 10 different players, and the trend over the past few years has wrapped in players with far smaller profiles than that of Antetokounmpo or Doncic. Detroit’s Saddiq Bey had 51 points last March. Fred VanVleet of the Raptors did it in 2021, and T.J. Warren had 53 points in a game for Indiana in 2020.

In the past, 50-point games were typically the reserve of the greats. Wilt Chamberlain had 118 of them (one of them, of course, reaching 100 points). Next are Michael Jordan with 31 and Kobe Bryant with 25.

Though some less expected names are popping for 50 these days, the big names are actually doing it less often than the Chamberlains and Jordans and Bryants. Among active players, James Harden has 23, LeBron James has 14 and Damian Lillard has 12. Of the players who scored 50 this season, Stephen Curry is tops with 11 career 50-point games.

As you might expect, with 50-point games up so much, so are games in the 40-to-49-point range. Ten years ago, there were only 33 such games. In recent seasons there have typically been about 100. But this season there are already 76.

A single player scoring 40 points in an N.B.A. game? Ho-hum.