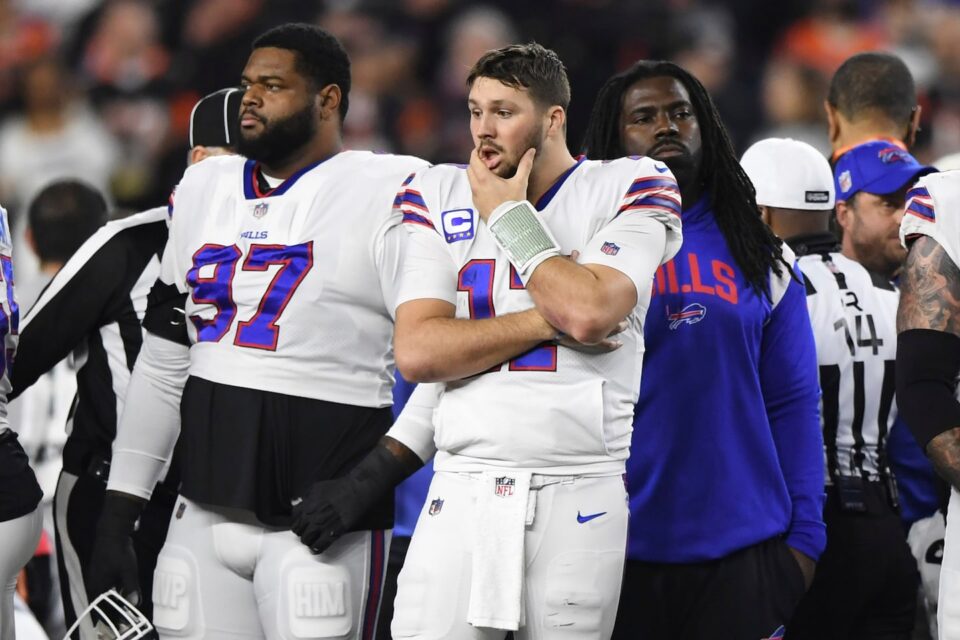 The NFL will not reschedule Monday night’s postponed game between the Buffalo Bills and Cincinnati Bengals, and the league said Thursday that it is poised to adjust its playoff format in an attempt to address the competitive inequities arising from that cancellation.

Under the revised system, the AFC championship game could be played at a neutral site, under certain conditions. Those circumstances involve the Bills or Bengals reaching the game as the road team.

The Bengals and Baltimore Ravens also could have the site of a prospective opening-round playoff meeting determined by a coin flip, under the modified format being proposed.

The modifications were recommended by Commissioner Roger Goodell and were approved Thursday by the league’s rulemaking competition committee, the NFL said. They will be considered Friday by the league’s team owners, who are scheduled to meet by videoconference for possible ratification of the plan.

“As we considered the football schedule, our principles have been to limit disruption across the league and minimize competitive inequities,” Goodell said in a statement. “I recognize that there is no perfect solution. The proposal we are asking the ownership to consider, however, addresses the most significant potential equitable issues created by the difficult, but necessary, decision not to play the game under these extraordinary circumstances.”

The NFL’s deliberations over its scheduling issues began after Monday’s game in Cincinnati was stopped during the first quarter. Bills safety Damar Hamlin was injured on a hit and suffered cardiac arrest on the field. The game was postponed later that night. Hamlin’s doctors at the University of Cincinnati Medical Center said Thursday that he had made substantial progress in his recovery.

The league decided Thursday to declare the Bills-Bengals game a cancellation.

“This has been a very difficult week,” Goodell said. “We continue to focus on the recovery of Damar Hamlin and are encouraged by the improvements in his condition as well as the tremendous outpouring of support and care for Damar and his family from across the country. We are also incredibly appreciative of the amazing work of the medical personnel and commend each and every one of them.”

Doctors at the University of Cincinnati Medical Center said Jan. 5 that Buffalo Bills safety Damar Hamlin was awake and could move his hands and feet. (Video: Reuters)

Those two teams will play 16 regular season games apiece, one fewer than other NFL teams. The playoff seedings in the AFC will be determined by teams’ winning percentages.

The cancellation gives the Kansas City Chiefs a pathway to the top playoff seed in the AFC, ahead of the Bills. The Chiefs can secure that with a victory Saturday in Las Vegas over the Raiders. Before the postponement, the Bills had been just ahead of the Chiefs based on a tiebreaker advantage from a head-to-head victory this season; they could have secured the No. 1 seed by beating the Bengals on Monday and the New England Patriots on Sunday to finish the regular season.

To address that, the league devised a system by which the AFC title game would be played at a neutral site if the Bills or the Bengals are the road team and potentially could have hosted the game by winning Monday’s game. So that applies only to certain outcomes under a complex formula that will come into sharper focus after this weekend’s results.

If the Chiefs and Bills both win this weekend, for example, and then meet in the AFC championship game, the game would be played at a neutral site. Under that scenario, the Bills could have been the No. 1 seed if they’d beaten the Bengals on Monday. But if the Chiefs win Saturday and the Bills lose Sunday, a Chiefs-Bills game in the AFC title game would be played in Kansas City. Under that scenario, the Chiefs would have been the top seed even if the Bills had won Monday’s game.

The NFL has not yet determined where a neutral-site AFC championship game would be played, a person familiar with the plan said.

The coin-toss possibility for determining the home team in a prospective Ravens-Bengals game in the opening round of the playoffs only comes into play if the Ravens win Sunday’s matchup between the two teams in Cincinnati.

Once it decided not to reschedule the postponed game, the NFL sorted through a range of possibilities. There was speculation about the prospects of adding an eighth playoff team to the AFC’s postseason field; adding an eighth playoff team in both conferences; or making the AFC’s top-seeded team choose between either having a first-round bye or home-field advantage in the conference title game.

DeMaurice Smith, the NFL Players Association’s executive director, said earlier Thursday that the league would have had to bargain with the union to add a playoff team or teams. Smith said he had not received such a proposal from the NFL.

The league did not consider adding an eighth team to the AFC playoffs, a person familiar with the deliberations said.

Troy Vincent, the NFL’s executive vice president of football operations, said Wednesday that “everything is being considered.”

The league could have rescheduled a Bills-Bengals resumption as a stand-alone game in an additional weekend added to the regular season, pushing back the playoffs and eliminating the off weekend between the conference title games and the Super Bowl. Alternatively, it could have played the remainder of the postponed game on a weekend including NFC playoff games while pushing back the AFC playoff games by a week. Instead, the NFL chose not to revisit the postponed game.

The league had to deal with rearranging its schedule in recent seasons affected by the pandemic. But this time, the postponement came so late in the regular season that there was no room to maneuver without pushing back the playoffs.

Vincent said Wednesday that the NFL’s scheduling decision might not be able to ensure competitive fairness, under the circumstances.

“As we saw, potentially there may be a lack of equity,” Vincent said, “where it may not be perfect but it will allow those that are participating, who have earned that right to play, to continue to play.”

Trump and 2 others sued over death of Capitol Police Officer Sicknick after Jan. 6 riot