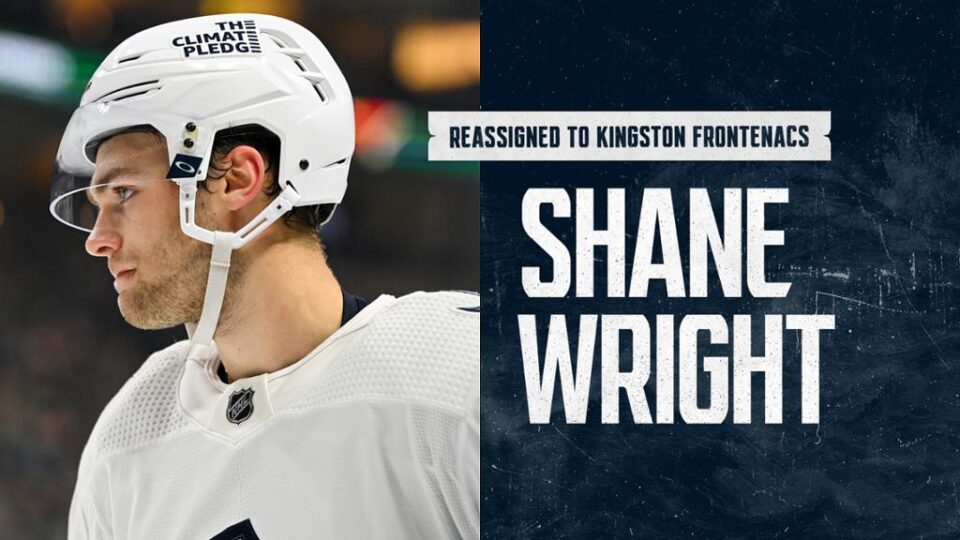 The Kraken announced Friday center Shane Wright has been reassigned to his juniors team, the Kingston Frontenacs, of the Ontario Hockey League.

Wright appeared in eight games for the Kraken, scoring his first NHL goal in a Dec. 6 home game against Montreal, then was loaned to Team Canada the next day. He impressed his Seattle teammates and coaches with his poise, toughness on the ice and willingness to learn all details of the sport required at the NHL levels, whether it is playing pucks off the wall or experiencing first-hand what it takes to stay net-front for tip-in and rebound chances in the offensive zone.

“We’re very proud of Shane’s performance at the World Juniors, helping captain Team Canada to a gold medal,” said Francis. “He has a bright NHL career ahead of him with the Kraken and now has an opportunity to lead his junior team as they compete for a Memorial Cup. We look forward to watching him the rest of this season and wish him well.”

Wright’s reassignment is far from unprecedented and, in fact, a typical path for top North American prospects, even those selected in the top five to 10 places in the NHL Draft. It is the rare exception that a teenager makes an NHL team out of camp, then stays on the roster after nine games. If a young prospect appears in 10 or more NHL games to start a season, it “burns” a year of the standard three-year entry contract that all NHL rookies sign.

Examples abound: Matty Beniers, named as an NHL All-Star Thursday in his rookie season, was a just-turned 19-year-old playing for NCAA Michigan into April last season. Mason McTavish, a promising forward with Anaheim (seven goals, 15 assists) as a rookie this year, played for OHL champion and Memorial Cup finalist Hamilton (on a line with 2021 Kraken third-rounder Ryan Winterton) last season before starring in the 2022 World Junior Championship, played last summer.

Speaking of the pandemic, Wright, like so many others in the 2022 draft class, lost an entire year of development when the OHL shut down the entire 2020-21 season due to the pandemic. Every NHL GM and amateur scout will say that lost year slowed the growth of every OHL player.

One more comparison: Chicago Blackhawks captain Jonathan Toews is a three-time Stanley Cup winner and future Hall of Famer who will be inducted on the strength of his two-way play at the center position. Toews was drafted No. 3 overall in the 2006 NHL Draft. He did not make the Chicago roster as an 18-year-old but instead returned to NCAA University of North Dakota and then-head coach Dave Hakstol for a season in which he grew as both player and leader for a squad that advanced to the Frozen Four.

Seattle’s choice to have Wright join his juniors team is one of only two options per the NHL’s agreement with the elite juniors Canadian Hockey League, which includes the OHL, Western Hockey League and Quebec Major Junior Hockey League. The just-turned-19-year-old, who won a gold medal on his birthday Thursday, isn’t eligible for the American Hockey League because there is a long-standing protocol that if an 18-year-old or 19-year-old (age as of the start of the hockey season) doesn’t remain on the NHL active roster, the player must return to his junior team.

In late November, the Kraken loaned Wright to AHL affiliate Coachella Valley on a conditioning assignment. The NHL allows teams team to send a player who has missed five consecutive games to the AHL for up to five games or a maximum of two weeks. Teams frequently use this tool for everything from a player returning from injury (Bowen Byram in Colorado, 2021-22) to helping a player find more ice time like Los Angeles’ Brandt Clarke (2022-23). Clarke was a key defenseman and teammate with Wright on the 2023 gold-medal team.

Wright flourished with the AHL Firebirds, notching four goals in five games and getting top-line shifts during 5-on-5 and the power play.

Wright attended Kraken development and training camps, making the 23-man active roster to start the NHL season. He worked diligently during all practices and morning skates, always among the last to leave whether he was suiting up that game night or not. There was extra development work with assistant coach Paul McFarland and player development coach Matt Larke.

Wright’s time on ice during six of his eight Kraken games was under 10 minutes, while the other two contests totaled 11 and 14 minutes. These numbers are less about the young center’s upside as a two-way center and more about Kraken roster bursting with NHL-tested forwards on a team currently sporting a 21-12-4 record.

Coach Dave Hakstol said as recently as after Seattle’s win in Toronto Thursday that “a good player [forward] who deserves to be in the lineup” is a healthy scratch each game night. Ryan Donato was the scratch among forwards Thursday, while Morgan Geekie sat out two games while newcomer Eeli Tolvanen waited 19 days to see his first action with the Kraken, making the most of it this week with two power-play goals and a primary assist on the game-winning goal in Edmonton Tuesday.

Kingston is currently fifth overall in the OHL’s Eastern Conference and no doubt will raise the club’s potential to win in the OHL playoffs and advance to the coveted Memorial Cup, which is a championship tournament for the CHL’s three leagues. The grind to win that trophy draws comparisons to what teams in the NHL and American Hockey League endure to win league crowns.