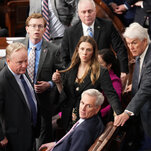 WASHINGTON — Confident that he was about to win the speaker’s gavel after a torturous four-day stretch of defeats, Representative Kevin McCarthy of California sat grinning late Friday night in his chair on the House floor. Then his face dropped.

As the voting dragged on in his 14th attempt to become speaker, it had become clear that winning would require the support of Representative Matt Gaetz of Florida, the Republican leader’s chief antagonist — and Mr. Gaetz had just voted “present.”

For days as the historic floor fight played out, Mr. McCarthy remained in his seat and dispatched allies to buttonhole the remaining holdouts privately. Now, his sunny smile replaced with a clenched jaw, Mr. McCarthy strode across the floor to confront Mr. Gaetz, who leaned back in his seat, exuding defiance.

Mr. McCarthy spoke sternly to Mr. Gaetz, appealing to him to finally relent and allow the speakership crisis to end; the Florida Republican jabbed his finger as he refused. After two minutes, Mr. McCarthy, seething and head down — the first flash of frustration he had shown all week — returned to his seat. He didn’t have the votes.

The astonishing spectacle that played out into the early hours of Saturday morning was a fitting coda to a week that spotlighted the deep divisions in the Republican Party, the power of an unyielding hard-right flank that revels in upending normal operations of government and a leader who has repeatedly capitulated to the right in his quest for power.

The final hours of Mr. McCarthy’s ultimately triumphant struggle for the speakership featured back-room dealing with the hard right and arm-twisting out in the open; phone calls from Donald J. Trump, the twice-impeached former president, to try to win over holdouts; haggling over how the House would operate in the coming two years; and even a narrowly avoided physical altercation inside the chamber.

“Preferably, you do this in private,” said Representative Patrick T. McHenry of North Carolina, who acted as Mr. McCarthy’s chief emissary negotiating with the rebels. “The preference in politics is to always suffer your indignities in private, not in public. That was the goal. And the last weekend, it was evident that we would have to suffer this in public.”

“That was easy, huh?” Mr. McCarthy said after finally taking the gavel just after 1 a.m. “I never thought we’d get up here.”

Over the last century, the negotiating and deal-cutting that have paved the way for the ascendance of new House speakers have typically played out behind closed doors and far ahead of the actual election; no speaker designate had needed more than one ballot to be elected since 1923. Instead, on Friday, much of the charged 11th-hour negotiations was televised in real time for all to see.

Electing a New Speaker of the House

Representative Kevin McCarthy won the speakership after a revolt within the Republican Party triggered a long stretch of unsuccessful votes.

The dysfunction that left the House without a speaker for a week also allowed the indignities to become more public. Photographers and videographers, unfettered from the normal rules governing their conduct because there was no speaker to put any in place, allowed spectators the opportunity to parse rare footage live from the House floor.

As Mr. McCarthy’s supporters furiously haggled with the hard-right holdouts, photographers captured a striking moment involving Representative Marjorie Taylor Greene of Georgia, a recent Mr. McCarthy ally. Ms. Greene was seen trying to push her phone, which displayed a call from “DT” on the other end, into the hands of Representative Matt Rosendale of Montana, a crucial defector. It was Mr. Trump on the line.

Mr. Rosendale furiously told Ms. Greene not to put him in that situation, brushing the phone away, according to lawmakers who witnessed it.

At around the same time, Representative Mike Rogers of Alabama, who is in line to become the next chairman of the Armed Services Committee, had to be physically restrained by another lawmaker who clapped his hand over Mr. Rogers’s open mouth after the irate congressman approached Mr. Gaetz.

“We haven’t seen this in a century,” said Representative Brian Fitzpatrick, Republican of Pennsylvania, referencing the last time a speaker election dragged out past nine ballots. “We’re in an emotional climate to begin with, absent this, before we got here. It’s emotions running high.”

Mr. Rogers had vented his frustration with the defectors over the past week, threatening during a closed-door party discussion on Tuesday that they could lose their seats on committees for their disloyalty. But he has reserved special contempt for Mr. Gaetz, the fourth-term Florida Republican and Trump acolyte who has established himself as an attention-seeking rabble-rouser on Capitol Hill.

Mr. Gaetz had told Mr. McCarthy and his allies that he was interested in leading an influential panel on the Armed Services Committee, where he has served since he arrived in Congress in 2017, according to people familiar with the discussions. Mr. Rogers was having none of it. (An aide to Mr. Gaetz said that the congressman had not sought a subcommittee chairmanship and did not anticipate receiving one.)

Now, Mr. Gaetz and Representative Lauren Boebert of Colorado, two of the most intractable holdouts, were refusing to budge, and suggested that the House adjourn until Monday before any more voting took place.

Ms. Greene, one of Mr. McCarthy’s most vociferous backers, was seen rolling her eyes while sidling up to Ms. Boebert, a fellow member of the Freedom Caucus, to tap her on the shoulder.

Representative Ken Buck, Republican of Colorado, said later that Mr. Gaetz and Ms. Boebert had appeared dug in. “They said that they had agreed to both vote present and they voted present, so that’s as far as they were going to move,” he said.

Crestfallen, Mr. McCarthy marched back to his seat, and Mr. McHenry called for the chamber to adjourn.

Yet there was movement still to come after all. After the failed 14th vote, Mr. Trump phoned Mr. Gaetz, according to two people familiar with the conversation. CNN reported that Mr. Trump had also reached out to Representative Andy Biggs of Arizona, who had remained a holdout even as a large group of defectors had swung their support behind Mr. McCarthy earlier in the day.

As the vote to adjourn unfolded, there was a shift in the energy on the House floor, and a commotion that appeared to change the mood. With little warning, both Mr. Gaetz and Ms. Boebert marched to the well of the chamber and raised up red cards to show they were switching their votes on adjourning to “no” after all.

“Everyone take your seats,” Mr. McCarthy said, appearing relieved. “Let’s do it one more time.”

On the next ballot — the 15th and final — Mr. Gaetz and Ms. Boebert cast the same “present” votes, signaling they did not support Mr. McCarthy but reducing the number of votes he would need to win a majority. The last of the holdouts — Mr. Biggs, Mr. Rosendale, and Representatives Eli Crane of Arizona and Bob Good of Virginia — fell in line and also changed their votes to “present,” allowing Mr. McCarthy to become speaker.

“Matt really wanted to get everybody there,” Mr. McCarthy said of Mr. Gaetz during an informal news conference later in the night. “Through all of this people’s emotions go up and down, and at the end of the night, Matt got everybody there.”

Both Mr. McCarthy’s allies and the rebels have remained tight-lipped about what exactly prompted the last group of defectors to change their votes between the 14th and 15th ballots.

Throughout the week, Mr. McCarthy and his allies had made key closed-door concessions to the holdouts that would change the way the House does business, including allowing open debate on spending bills and a measure allowing a single lawmaker to force a vote to oust the speaker. Some were still trickling out on Saturday, such as a promise to equip a subcommittee tasked with investigating the “weaponization of government” with the same resources as the Jan. 6 select committee.

Mr. Trump, for his part, attributed the success to his interventions in a post on his social media site on Saturday, claiming news coverage had shown he had “greatly helped” Mr. McCarthy in winning the speaker post. “Thank you, I did our Country a big favor!” he wrote.

Mr. McCarthy’s triumph came two years after he stood on the House floor after rioters attacked the Capitol on Jan. 6, 2021, and said Mr. Trump bore “responsibility” for the assault, “should have immediately denounced the mob” and that “these facts require immediate action by President Trump.”

Within weeks, he was making a pilgrimage to Mar-a-Lago to mend fences with an infuriated Mr. Trump and deeply engaged in an effort to block an investigation of the Jan. 6 riot.

After rattling through the half-dozen lawmakers who helped negotiate a way out of the speakership impasse, Mr. McCarthy made a point of lavishing praise on Mr. Trump during a news conference in the Statuary Hall after he was elected.

“I do want to specially thank President Trump,” he said on Saturday morning. “I don’t think anybody should doubt his influence.”

As he ticked off a list of agenda items that he said Mr. Trump wanted Republicans to unite behind, including improving the economy and border security, Mr. McCarthy concluded: “He was a great influence to make that all happen. So thank you, President Trump.”

In a Ukraine Workshop, the Quest to Build the Perfect Grenade