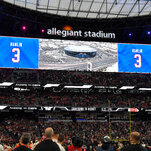 LAS VEGAS — One of the most traumatic weeks in the N.F.L. history ended much as it began: With fans tailgating and players clashing in highly anticipated football games filled with touchdowns and bone-crunching hits.

In between, the league and the millions of fans grappled with their addiction to football five days after Buffalo Bills safety Damar Hamlin collapsed onto the field during a game in Cincinnati and went into cardiac arrest — a terrifying scene that stretched for 10 minutes as medical personnel repeatedly compressed his chest and teammates and opponents wept.

The N.F.L. has been thrust into many crises, including after the attacks of Sept. 11, 2001 and Hurricane Katrina, which forced the Saints to abandon New Orleans. But the league has never had to grapple with the sight of doctors and paramedics trying to save a player’s life on the field during a prime time game with millions of people watching.

Hamlin remains in critical condition, but his breathing tube was removed on Friday and on Saturday he sent his first posts on social media. His recovery has given license to the league, the players and fans to focus again on the sport they love as the regular season ends this weekend.

It was, with a slight twist on the old saw, any given Saturday as Las Vegas hosted Kansas City and Tennessee traveled to Jacksonville to play the Jaguars. The few signs of the pall that Hamlin’s injury has cast over the league were mostly visible only before the games.

In Las Vegas, Kansas City quarterback Patrick Mahomes warmed up in a cutoff hooded sweatshirt with an image of Hamlin and the words “Hamlin Strong” on the back, one of the many tributes to Hamlin at Allegiant Stadium.

Most Raiders players wore black warm-ups that said “Love For Damar” and had his No. 3 on the front. The No. 3 was outlined in dark blue, Buffalo Bills colors, on each 30-yard line.

“Throughout this week the entire N.F.L. family has been praying for Damar Hamlin of the Buffalo Bills as he continues his recovery,” the public address announcer said before the national anthem was played. “The Raiders ask you to join us in a moment of support and love for Damar, and cheer for him and his family as they continue their fight.”

The scene was similar in Jacksonville, with a twist. After both teams warmed up, every Jaguars and Titans player and coach met at the 50-yard line, took a knee and prayed for about one minute. The fans in TIAA Stadium who had been cheering went silent.

Then it was back to football. In Las Vegas, Raiders kicker Daniel Carlson booted the ball 75 yards into the opposing end zone for a touchback to open the game, and then Mahomes and his offense spent 60 minutes tormenting their division rivals in a 31-13 victory.

In Jacksonville, linebacker Josh Allen returned a Titans (7-10) fumble 37 yards for a touchdown with three minutes left to propel the Jaguars (9-8) to a 20-16 win and their first A.F.C. South title since 2017.

The Titans jumped out to a 10-0 lead behind running back Derrick Henry, but Jaguars quarterback Trevor Lawrence responded by throwing a 25-yard touchdown score to receiver Christian Kirk.

In the third quarter, Lawrence overthrew receiver Zay Jones, who was wide open in the end zone, and settled for a field goal. The Jaguars could not muster much offense, but their defense pressured the Titans backup quarterback Joshua Dobbs, whose fumble was scooped up by Allen for a go-ahead score.

The Jaguars will now host a wild-card round game next weekend.

And just like that, the National Football League soldiered on after a week of anguish and unanswered questions.

It was just two games, but they were vitally important ones for the N.F.L., which makes billions of dollars marketing a violent sport while hoping it never reaps the worst consequences of that violence. The gravity of the injury to Hamlin created a crisis for the league because it starkly reminded fans of the possibility that they could witness far worse than concussions and torn ligaments.

The game in Las Vegas proceeded even as players were still processing what they had witnessed Monday night.

Wearing a “Love For Damar” shirt after the game, Mahomes said it was “definitely weird” to step back onto the field after Hamlin’s injury. “You have that in the back of your mind,” he said.

He said Hamlin’s improving condition made it easier.

“That gives you a little bit of that final thing that, all right, this is what we are supposed to be doing, let’s go out there and give joy not only to us, but the rest of the world watching us,” he said.

The games looked like any other N.F.L. games. There were spectacular plays, bad fumbles, fans mugging for the camera, and halftime entertainment provided by a band past its prime.

Fans, too, seemed eager to get back to football. In Jacksonville, tailgaters played cornhole and beer pong, grilled burgers and mixed cocktails. Inside the stadium, a standing-room-only crowd waved white towels to pump up the Jaguars — frequent cellar dwellers — who had a chance to return to the playoffs for the first time since 2017.

The public address announcer at both stadiums asked the crowd to “join in a moment of support and love for Damar” before the national anthem was played.

Far from the games, Hamlin was on the mend. The Bills said Saturday that while he continues to make progress at the University of Cincinnati Medical Center, he remains in critical condition. He is breathing on his own, however, and his neurological function is “excellent,” according to the team. On Friday, Hamlin spoke to some of his teammates on a video chat.

“On a long road keep praying for me!” read a new post on Hamlin’s Instagram account Saturday, the first direct communication from Hamlin since his injury.

Injuries are inevitable in football, and players are used to competing through pain that would sideline the average person. They are also accustomed to continuing to play even after watching teammates get carted off the field. The Raiders had to do that Saturday, when linebacker Harvey Langi left the game with a concussion.

Hamlin’s injury, though, which threatened his life, was not the kind of thing players could compartmentalize: It resulted in the game being postponed and eventually canceled, both of which are nearly without precedent in N.F.L. history.

“I don’t think it’s ever out of your mind as a player, to experience that,” said Chris Jones, a Kansas City defensive lineman. “I think you try to mask it with what’s going on with your surroundings.”

While the N.F.L. engineered tributes to Hamlin, few fans in Las Vegas seemed to do so. There were a handful of fans wearing Bills jerseys at the stadium, though there were just as many in gear representing the Cowboys, the Seahawks and other teams.

Frank Nostro, 54, who wore a Josh Allen No. 17 Bills jersey, said he was watching as Hamlin got hit Monday night. “I thought it was just a regular hit — you see a lot of guys go down with a concussion or something like that,” he said. “But you see the replay and the panic in some of the coaches and the staff out there, and you realize it was something really bad.”

Nostro, who grew up in Buffalo and moved to Las Vegas 30 years ago, was mostly interested in seeing the Bills win a championship. “If the Raiders win today, that helps Buffalo,” he said.

The Raiders did not help the Bills. With the victory, Kansas City finished the regular season with a 14-3 record and clinched a bye in the first round of the playoffs.